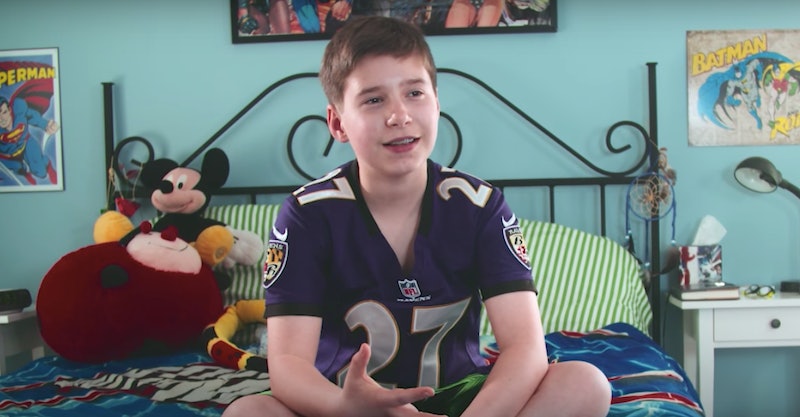 Grab the nearest tissue box, because the following video will make you cry so hard you'll be dehydrated for weeks. Six months into Donald Trump's administration, to use the term loosely, the Human Rights Campaign (HRC) created a video showing transgender kids schooling Trump on the true definition of friendship. While it seems like the Cheese Puff in Chief could use a better understanding of the word for diplomatic reasons, the clip actually refers to remarks he made during his presidential campaign.

"Who really is the friend of women and the LB and LGBT community: Donald Trump with his actions or Hillary Clinton with her words?" he asked in a speech following the Pulse nightclub shooting last June. Although he claimed during his campaign to be sympathetic to the LGBTQ community, his presidential administration has taken a different tack. Despite taking the time to declare June African-American Music Appreciation Month, National Ocean Month, and National Homeownership Month, he broke with recent tradition and failed to recognize it as LGBTQ Pride Month. Several of his nominated officials, not to mention his vice president, have markedly regressive views on LGBTQ rights.

Perhaps most notable, though, is the Trump administration's decision to rescind Obama-era directives protecting the rights of transgender students. Previously, schools receiving federal funds were instructed to allow students to use bathrooms and locker rooms corresponding to their gender identity. In April, however, Trump's administration rolled back the directives. Are these the actions of someone friendly to the LGBTQ community?

According to the trans students featured in the HRC's video, absolutely not. Friendship, they say, is reserved for someone who accepts them and stands up for them. "A friend wants me to be happy," says one child.

"These trans kids know what it means to be a friend," the HRC's video concludes. "Donald Trump, you are no friend."

So far, Trump's actions don't match up with anyone's definition of friendship except his own. To marginalized communities, from transgender students to Muslim refugees, he's more bully than ally. It's difficult to believe protestations of support when his actions so obviously belie his words. All that's left to do, then, is to hold him accountable.

More like this
The 19 Best Tweets & Memes About Bisexual Awareness Week
By Lexi Inks
An Honest Review of MeUndies Boxers, According To A Non-Binary Person
By Megan Lasher
Pro Footballer Zander Murray Is "Blown Away" By Support After Coming Out
By Sam Ramsden
Black Women's Equal Pay Day Highlights An Upsetting Problem
By Brandi Neal
Get Even More From Bustle — Sign Up For The Newsletter