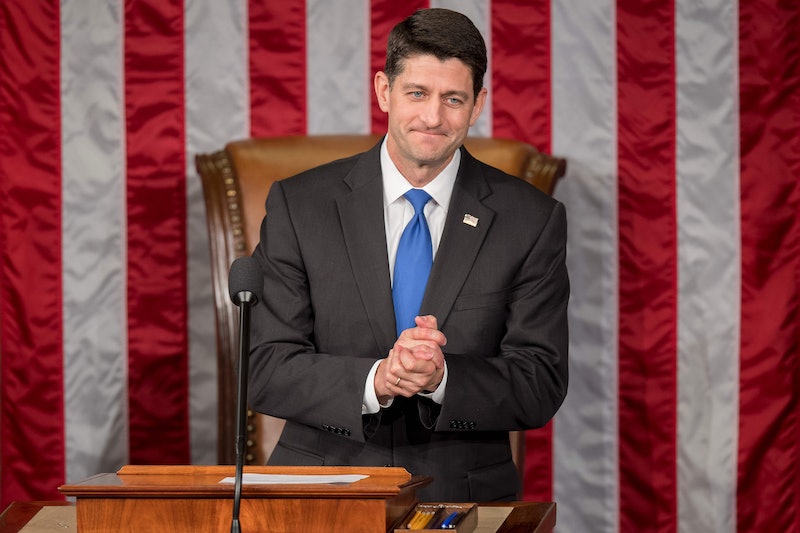 In this political climate, a little humor is always welcome. That's why Paul Ryan's reaction to a new congressman's son "dabbing" is the sort of news that you need to stop whatever you're doing to watch, even if there may be more important stuff going on. Because at the base of it, Paul Ryan is just a confused dad, missing out on all the teenage cultural references.

As most congressmen do, new Kansas Rep. Roger Marshall brought his family along for his swearing in ceremony, including his son Cal. When it came time for the photos, Cal, who was standing right behind the Bible and in between his father and Speaker of the House Paul Ryan, lifted up his arm to dab.

An obviously confused Speaker Ryan then asked if Cal was alright, which Cal of course responded to in the affirmative. His dad's a new congressman and Cal managed to dab with the whole country watching — why wouldn't he be alright?

Ryan wasn't having it, though, saying, "Do you want – can you put your hand down?" At this point, teenage hero Cal Marshall felt compelled to put his hand down, but Ryan pushed on.

"Were you going to sneeze? Is that it?" asked Ryan, clearly to Cal's amusement.

Cal replied by saying that he was sneezing, but you know that wasn't the case. He was dabbing, showing off a dance move popularized by Carolina Panthers quarterback Cam Newton. His own father, also clearly confused, repeated that he was sneezing — because of course he did, because dads.

Unsurprisingly, the good-natured Ryan handled the whole thing well, later tweeting about it and admitting that he still didn't understand the whole incident.

The newly anointed Rep. Marshall took it a different direction, saying on Twitter that Cal had been grounded. As the moment picked up steam, people had many reactions — Paul Ryan is painfully white and out of touch, the millennial generation should be embarrassed for itself, Cal Marshall is a hero, Cal Marshall ruined his dad's big day, etc.

No matter what your opinion on it is, you have to admit that it was funny. And awkward. And embarrassing for everyone involved. It was a moment of humanity peeking out through the dark cloud surrounding this country's politics at the moment. You should be paying attention to the dark cloud too, of course. But when something appears to make you smile, give it the time of day. Thank you, Cal Marshall and Speaker Ryan, for providing that today.