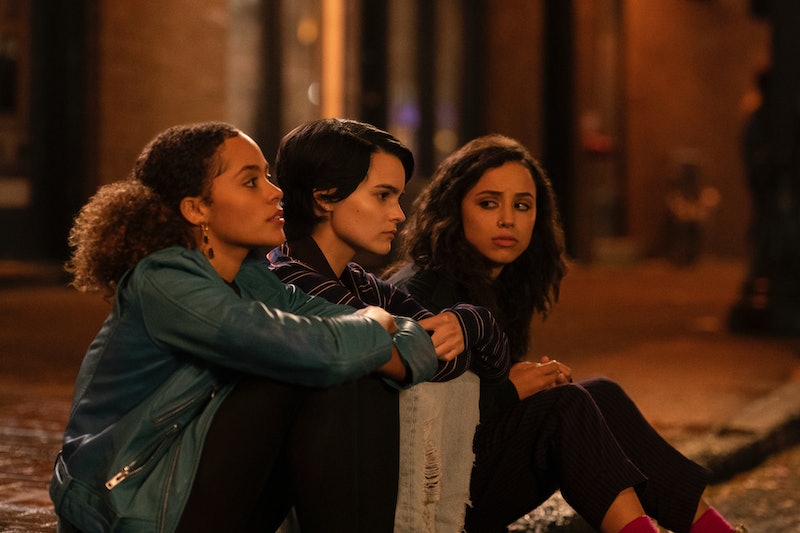 As anyone who’s ever been a teenage girl can attest, going through that volatile, vulnerable time isn’t easy. Yet legendary screenwriter and Trinkets executive producer Kirsten Smith has made a career out of perfectly capturing the highs and lows of teenage life and depicting them with humor, understanding, and a dash of nostalgia.

Though you may know Smith for her work perfecting the art of the modern rom-com — along with writing partner Karen McCullah, she wrote the screenplay for classics like 10 Things I Hate About You, Legally Blonde, Ella Enchanted, and more — she's more than a rom-com icon. Her true specialty is telling teenage stories, nailing not just the romantic relationships involved, but the particular way that young women relate to one another. Her latest project executive producing the new Netflix and AwesomenessTV series Trinkets allows her to do just that. And this time, she's getting deeper into depicting the dramatic side of teenage life than she ever has before.

Based on Smith’s 2013 novel of the same name, Trinkets follows three high school girls from different social groups who meet in Shoplifters Anonymous and form a fierce bond. Smith, who dabbled in shoplifting herself in her youth, tells Bustle she used to fantasize about meeting “like-minded semi-criminals” who she could talk to about why she was attracted to the habit. She admits there's a bit of wish fulfillment involved in telling this story, too: The idea of three girls from totally different backgrounds and social groups who might never have interacted outside of Shoplifters Anonymous forming a friendship was something she was missing in her own life.

This is one way in which Trinkets feels different from Smith’s usual fare. While it includes romantic relationships, the heart of the story lies in the friendship between Elodie, Tabitha, and Moe. “It was really fun to [do] a little bit of a different teen genre,” Smith says. “It’s playing [in] a little more of a dramatic place, more vulnerable.” Inspired by films like The Breakfast Club and shows like My So-Called Life, Trinkets inhabits an entire teenage world: their home lives, their social interactions, and their inner thoughts, too.

Because Trinkets is a personal story for Smith, it takes place in the town where she grew up: Lake Oswego, Oregon. The setting allowed Smith to weave some of her favorite Pacific Northwest artists into the soundtrack, too. “It’s a little more intimate for me,” she admits, referring to both the content and the tone of Trinkets. “We have moments that are — hopefully — that are kind of awkwardly funny,” she says, recalling her own “horrible, awkward, terrible” teenage years. But as much as Smith wanted to imbue the show with a sense of nostalgia, she also felt it was important that it be a story that's “as contemporary as possible” — and that meant changing several key aspects from the book.

One of the main changes involves Elodie: in Smith’s novel, she’s straight, while the show’s version of the character, played by Brianna Hildebrand, is queer. Moe’s relationship with Noah — in which she determinedly keeps him at arm’s length — got a modern update, too. “Flipping the power dynamic with Moe and Noah was really a fun one,” Smith recalls. “I’m so excited about Elodie’s queerness and about Moe’s kind of patriarchy-toppling that she’s doing."

For Smith, there was no hesitation about changing it up from the book. “I’m really glad that we created those characters and made those adjustments to the original text,” she says. Smith believes that rom-coms today come from a “combination of nostalgia for [the rom-com genre] and also a desire to shake it open and tell stories from different points of view.” With Trinkets, Smith gets her own chance at ditching the “cookie-cutter heroes of the ‘90s,” and there’s no demographic she’d rather shake up than the world of stories about teenage girls.

That's because, despite the aforementioned awkwardness of Smith's own teenage years, she maintains that there’s nothing more exciting than being a teenager. “It’s a thrilling time, because you’re experiencing everything for the first time,” she muses. “Everything feels like it’s on superblast when you’re a teenager. All the emotions, and all the discoveries that you make: the first concert you go to, the first trouble you get into, the first best friend you make, the first time you fall in love.”

More like this
At 28, Debra Jo Rupp Was Living A Much Different '70s Show
By Grace Wehniainen
Keyla Monterroso Mejia Is Finally The Star Of The Show
By Gabrielle Bondi
At 28, Rosie Perez Risked Her Career To Stop Playing Stereotypes
By Gabrielle Bondi
Zach Reveals The Chaotic 30 Minutes That Were Cut From ‘The Bachelor’ Premiere
By Grace Wehniainen
Get Even More From Bustle — Sign Up For The Newsletter
From hair trends to relationship advice, our daily newsletter has everything you need to sound like a person who’s on TikTok, even if you aren’t.