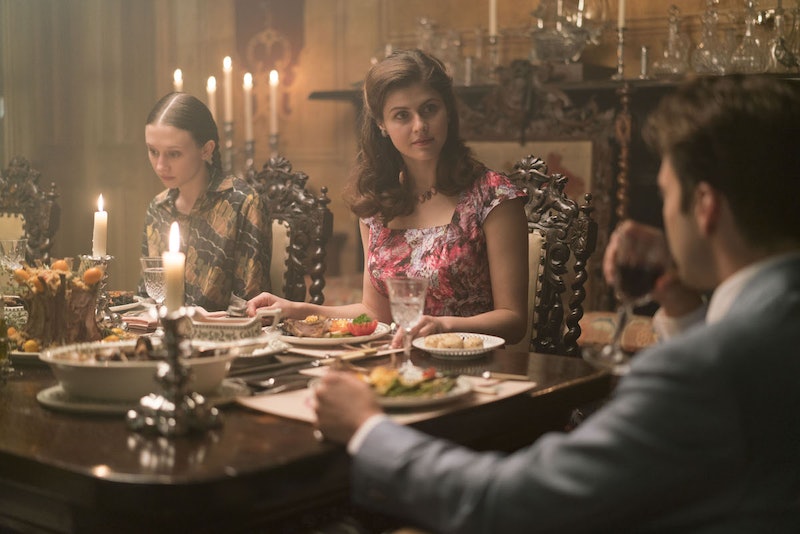 If you're a fan of the Netflix series The Haunting of Hill House — a chilling show about one group of siblings' mysteriously haunted childhood in a mansion on a hill — you know that author Shirley Jackson's stories are a unique breed of scary. They're the kind that slowly creep up on you instead of darting out of the shadows. Jackson's latest novel to be adapted onscreen is her 1962 mystery thriller We Have Always Lived in the Castle, which like, Hill House, is a story that centers around a family. But while Hill House is a ghost-filled, supernatural tale, We Have Always Lived in the Castle, in theaters and on demand May 17, is sinister in a different, much more subtle way. "There's this feeling of something being a little twisted. A little foreboding," says Taissa Farmiga, who plays Merricat, when we meet at the Crosby Street Hotel in early May. "But there's also this sort of fairytale glaze over it."

We Have Always Lived in the Castle definitely isn't a horror movie or a thriller in the usual sense of the genres. There are no jump scares, no suspenseful scenes in the dark, no long hallway chases. Instead, it's the almost alienating, other-worldly strangeness that gets the goosebumps going.

Farmiga adds that what's frightening about the the film is portrayed through its characters' arcs. "I think it's the emotional journey of the characters that puts people on edge," explains the actor. "There are these two girls who are ostracized and shunned by their community, and shunned even by their family members. They're put in a corner, and this is [their] place and this is where [they're] supposed to be." It's the repression of the sisters' anger and other feelings, that they're trapped in a confined space, and the sense that this will all ultimately blow up that create a lot of the tension.

Sisters Constance (Alex Daddario) and Merricat Blackwood live with their frail and mentally ill Uncle Julian (Crispin Glover) in a large manor atop a hill in a small town — the only survivors after an arsenic poisoning incident that killed the rest of the family. Though the townspeople despise them for their privilege and their supposedly snooty ways, they live peacefully secluded from the rest of the world. But everything changes when their cousin Charles (Sebastian Stan) comes to town and claims that he wants to help them around the house, when in fact his intentions have much more to do with claiming the family fortune. While sweet and optimistic Constance warms up to her dear cousin, Merricat feels threatened. Charles's intrusion, and the battle for power in the Blackwood "castle" unearths secrets from the past about the night of the Blackwoods' murder, and results in yet another tragedy.

It sounds dark, but the film doesn't look it. As Farmiga points out, We Have Always Lived in the Castle is a film filled with contradictions. Though the mood has a bleak and ominous feel, the aesthetic of the film is bright and full of color — from the house's interiors and lush gardens, to Constance's wardrobe. "'Something's messed up here,' but yet everything feels like it's fine," she says. "It's like Constance. She's telling you bad things, but she's smiling at you."

And like the film itself, the narrator is also difficult to figure out. Merricat, who is the younger of the two sisters, is an 18-year-old who seems to be stuck in her 12-year-old ways. "She can feel almost childlike in one instance, and the next she seems infinitely aware and intelligent," explains Farmiga. Merricat is both little sister and big sister to Constance as she always protects her from the harsh realities and dangerous people of the outside world, but at the same time it's also Constance who provides Merricat with physical care and food. It's also Constance who fixes her hair, and make sure she dresses properly before heading out of the house. "At the end of the day, [Merricat's] a girl who is uncomfortable in her own body, and she needs to learn to love herself. And the only person she really loves in the world is Constance," the actor says.

To prepare for her role as the strange and awkward teen, the actor read Jackson's book multiple times. She got to know Merricat intimately through her dark inner monologue, and it wasn't hard for her to get into her character's frame of mind. The real challenge was in channeling her physically. "[Director Stacie Passon] had me watch Channing Tatum in Foxcatcher as an example of someone who completely changes their body posture and body language." (In the 2014 film, Tatum, a dancer, plays the hulking wrestler Mark Schultz, tightening his more fluid movements to suit the character.) Farmiga adds, "It's easier to change your mental outlook on life when you're playing your character. But your physical body is something you're with for a very long time. So that was what I was most nervous about."

But the nerves didn't get the better of the actor. "As soon as I put the wardrobe on, as soon as I was in hair and makeup and we filmed the first scene and I started walking, I was like, 'Oh, I get it!'" Farmiga says.

Since it's Merricat who carries the audience through whole film, that mastery was essential. Farmiga's performance is a big part of what makes We Have Always Lived in the Castle a beautifully disturbing film, just the slightest bit campy, and different from all the other spooky movies coming out this year.

More like this
The New 'National Treasure' Series Trailer Teases The Return Of A Popular Character
By Grace Wehniainen
On 'The Handmaid’s Tale,' Christine Ko Fights Back
By Gretchen Smail
Jinkx Monsoon Is About To Get Real Sketchy
By Sam Ramsden
The New Bachelor Will Be Announced Next Week & Here Are The Top Contenders
By Grace Wehniainen
Get Even More From Bustle — Sign Up For The Newsletter