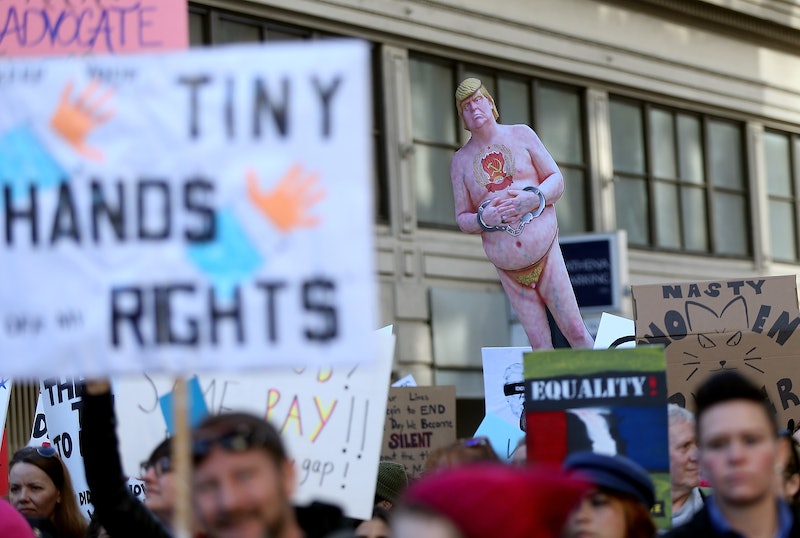 Pictures from the Women's Marches on January 21 show a movement declaring that the future is female in the face of President Donald Trump's misogyny. Like at any protest, much of the message was made through signs, quite a number of which played on what is possibly Trump's biggest sore spot — his small hands. "Big ovaries trump small hands," read one sign I kept bumping into at the Paris march. "Keep your tiny hands off my rights," read another.

The joke is that small hands mean a small something else, and that a small you-know-what is a sign of a man's weakness. The joke speaks to the cultural notion that a man's virility is equal to his strength, and that both can be measured by the size of his genitalia. The small hands line is a tempting way to lash out at Trump, but there's a big problem: it is essentially woman-hating. Making fun of Trump's small appendages belittles him on the basis that he is lacking in the penile department — aka that he is more "feminine."

Also popular, and no less problematic, were signs that allude to gay sex as a form of taunting, like one sign I saw in New York that proclaimed, "Putin's butt boy not my President." When feminists use this narrative, we play into Trump's message that manliness is what matters, and that women and gay men are laughable.

A small penis is derided because it means a lack between your legs. And who "lacks" between their legs more than women? Historically, the whole idea gets a rundown in psychoanalytic literature, which reduces the vagina to a source of penis envy for women and castration anxiety for men. (Thanks Dr. Freud.) That genital lack has often been thought to symbolize intellectual and moral deficiency and has provided a convenient way to justify women's second-class citizenship.

During last year's campaign cycle, the art collective Indecline surreptitiously erected life-size statues of a naked Donald Trump in six cities across the country. The highlight was the model's small penis and missing testicles. Indecline (also the group behind the "Rape Trump" mural) named their work, "The Emperor Has No Balls." The point was to emasculate Trump with an ode to the adage that having balls is akin to having courage, and a candidate without balls must be a coward. Of course, I can think of some other people who don't have balls. About 157 million in the United States, in fact.

The statue, like the small hands jokes, suggests that power is equal to masculinity, which in turn is represented by a big penis. That is a problem for those of us who don’t have a big anything dangling between our legs — and for the many who do, and are getting the message that their size is the measure of their manhood.

I've been to my fair share of lefty protests, and they are never without signs that shame men in power by calling them "pussies" or referencing their ability to take it in the ass. These insults cut down all of us who possess actual, beautiful, powerful pussies, or who have sex from behind. The Women's March brought to the forefront the glory of all things pussy. But calling out Trump for having small hands is no better than shaming someone by calling them a bitch, a cunt, a fairy, or any other insult based on the derision of womanhood.

As a candidate, Trump got into a pissing contest when he referred to his fellow candidate as "Little Marco Rubio," who responded by telling supporters that he may be smaller, but his hands are bigger. "And you know what they say about men with small hands — you can't trust 'em," Rubio joked. The innuendo about Trump's manhood was clear. Trump later defended his manly parts during a primary debate, assuring the country that "there's no problem. . . . I guarantee you."

The candidates' insults traded on the idea that size speaks to masculinity and that masculinity equals power. By trafficking in these same insults, we strengthen the tiresome idea that femininity itself is unworthy. Women, effeminate men, and people who are somewhere between or outside those categories are reduced once more to lesser-thans who lack in contrast to big-handed manly men. Femininity itself is devalued along with everything that has historically, for better or worse, been associated with it — nurturing, love, affection, even peace.

Republicans understand well that language both builds and reflects our reality. The GOP has been a master of political rhetoric since Donald Trump was a Democrat. They won the name game in everything from the "pro-life" moniker to the "states rights" euphemism. They have done so in part because Democrats and progressives have conceded to their language.

Surely there will be plenty of opportunities over the next four years to rattle Trump and his cronies with insults of the small hands genre, but when we embrace misogynist GOP language, even jokingly, we promote their misogynistic values. We all know that is something we cannot afford to do — so let's think of more intelligent things to say.

More like this
Women Around The World Are Cutting Their Hair In Solidarity With Mahsa Amini
By Darshita Goyal
Romance Authors Are Mobilizing For Reproductive Rights
By Natalia Perez-Gonzalez
What Is A "Hot Girl Book" & Why Is Everyone Talking About Them?
By Samantha Leach
Why You Won’t See Prince William & Kate Middleton Hold Hands At The Queen’s Funeral
By Darshita Goyal
Get Even More From Bustle — Sign Up For The Newsletter