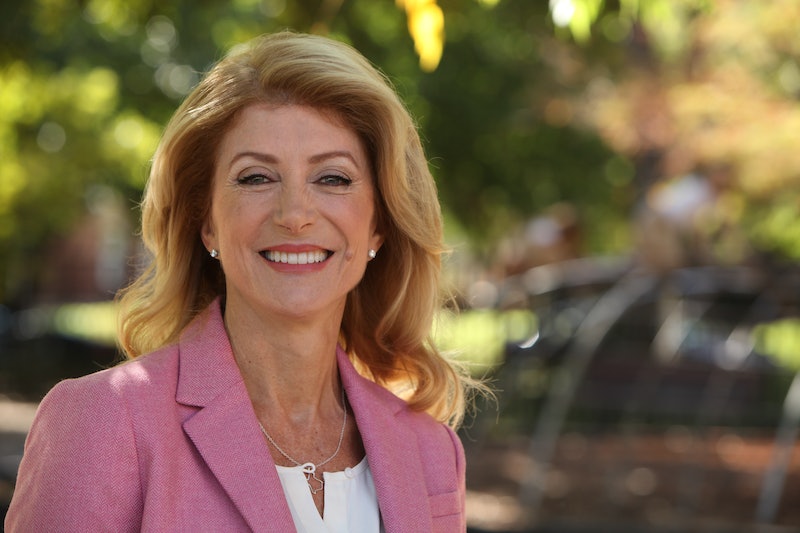 What’s the emotion you feel when, in a horror movie, a girl goes into the scary-looking basement and then gets attacked by a monster, and you’re like, “Of course there was a monster down there, what did you expect?” Well, this week, the scary basement is Donald Trump and the GOP, the girl is America, and the monster is the defunding of Planned Parenthood. Fortunately, we have some strong advocates helping us stay resolute in the face of dire circumstances — and one of the very top is Wendy Davis, who famously filibustered Texas House Bill 2, a set of abortion clinic restrictions that eventually passed but were ultimately struck down by the Supreme Court this past June in Whole Woman's Health v. Hellerstedt.

Davis, who started Deeds Not Words, a nonprofit devoted to helping women take concrete steps to creating change, spoke to Bustle a day after House Speaker Paul Ryan confirmed the effort to completely strip Planned Parenthood of federal funding as soon as next month.

“You know, we expected it,” Davis said. “It’s a confirmation of things that you talk about during a campaign, right, that elections have consequences.”

Davis said that she believes some people didn't take Trump and Republicans' anti-choice rhetoric seriously during the past year. “I think that sometimes people shed the idea that some of these horrific things will happen in order to ease their conscience a bit about voting for a person who threatens to do those things,” Davis continued. “I personally know people who voted for Donald Trump and who are very strong supporters of Planned Parenthood, but who said 'Oh, you know that’s just campaign rhetoric, that’s not really going to happen.’”

But happening it is. Ryan unveiled the plan to attach language to the planned Obamacare-repeal bill that will deprive Planned Parenthood of hundreds of millions of dollars in funding.

Despite expecting the move from the Republican-controlled Congress, Davis said she still finds the situation perplexing.

“Republican lawmakers have learned that making Planned Parenthood the boogie man is something that gains them political points.”

“I’m actually amazed at how many people don’t realize the work that Planned Parenthood does in the preventive health care side of their work,” Davis said. “I think a lot of people believe and associate Planned Parenthood strictly with abortion services, and as you know, it’s a very small portion, 3 to 5 percent, of what they do.”

For Davis, fixing the disconnect between political action and real-world consequences is crucial to protecting Planned Parenthood. “If the defunding occurs, the women who are impacted by the defunding need to be educated about the fact that their clinics closed because of politicians,” Davis said. “That was one of the challenges that we had in Texas, where women knew their clinic closed but they had no idea that it closed because of a political decision in Austin, in the Capitol.” And because of that divide, Davis said, “they didn’t know to react in a political way.”

"John Q. Citizen, who is not personally impacted by the defunding, needs to understands what the human impact of that looks like."

But it’s not just those who will directly feel the impact of the defunding who need to be educated, Davis argued. “John Q. Citizen, who is not personally impacted by the defunding, needs to understands what the human impact of that looks like, so that they will have a political response as well,” she said. “That understanding really occurs primarily through storytelling.”

As far as the best action points, Davis encouraged pro-choice advocates to talk to their representatives in Congress. She underscored that it is especially important for Maine and Alaska residents, whose Senators are seen as linchpins of the legislation. “The information we have right now is that Susan Collins of Maine and Lisa Murkowski of Alaska, in large part, this vote hinges on them,” Davis said. Voters in those states “have to let them know they intend to hold them accountable at the ballot box if they do vote for the defunding.”

For those of us who don’t live in those states, though, getting in touch with your representatives is still important. “We need to be calling them and either saying thank you to our friends, if you live in a friendly congressional district, or we need to be calling and expressing our discontent with their vote, if they’re adversaries of an issue we care very much about," Davis said. "And we need to do it now."

And even if the effort to defund Planned Parenthood doesn’t go through, pro-choice advocates need to remain vigilant for anti-choice efforts on the state level. “At the state level we’re not just looking at defundings, which are occurring in states beyond Texas, but we’re also, of course, looking at the continued constraints on women’s access to abortion," Davis warned.

That proactive vigilance and commitment to fight back is key, according to Davis. What would actually be worse than the federal defunding of Planned Parenthood is if it set off a sense of defeatism in the pro-choice movement. “We can’t just let them off the hook because they’re Republicans and because we think they’re going to ignore us,” Davis said. “We’ve got to make sure we make our voices heard.”