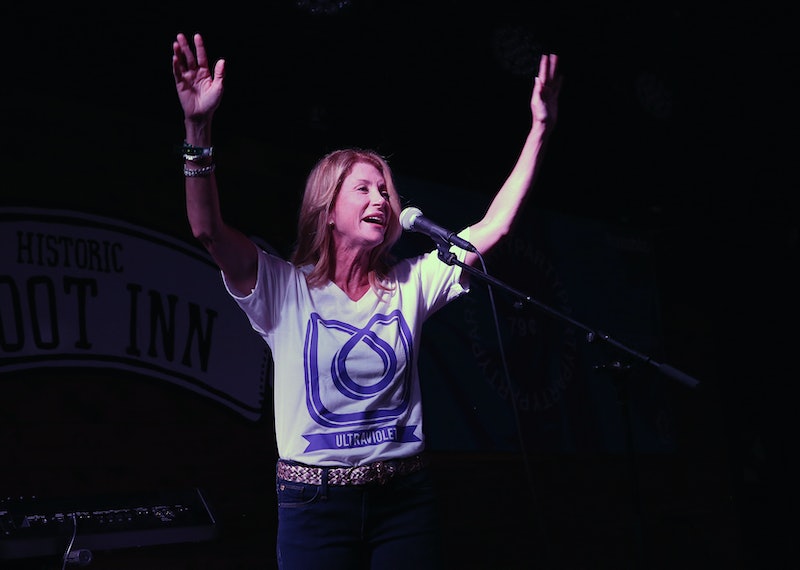 Former Texas state senator and reproductive rights icon Wendy Davis might run for Congress, the Texas Tribune reported on Friday. But although there's a U.S. Senate seat on the ballot in 2020, Davis said Thursday that she's eyeing the House of Representatives instead, according to the Texas Tribune.

"I'm looking very seriously at Congressional District 21," Davis said on an episode of The Rabble: Texas Politics for the Unruly Mob podcast that taped Thursday. "I live in that district now, and [Democrats] came very close to winning it in 2018...the question is, can we do it for 2020?"

Davis became a national figure in 2013, when she stood up for 11 hours straight to filibuster a bill to impose severe restrictions on abortion access in Texas, the Washington Post reported. The legislation in question banned abortion after 20 weeks and required all abortion clinics to have admitting privileges, according to the Post; it ultimately passed in a subsequent legislative session before being struck down by the Supreme Court in 2016, CNN reports. Davis went on to run successfully for Texas governor in 2014 before founding Deeds Not Words, a non-profit aimed at empowering young women who want to enter politics.

Republican Sen. John Cornyn is up for reelection in 2020, and his seat has been the subject of intense focus by state and national Democrats, according to the Texas Tribune. Vanity Fair reported in February that Senate Minority Leader Chuck Schumer had met with former Rep. Beto O'Rourke, who lost a close Senate race in 2018, in an attempt to recruit him to run for Cornyn's seat. After O'Rourke opted to run for president instead, Texas Monthly reported that Rep. Joaquin Castro was "all but certain" to make a run for the seat instead.

In her interview Thursday, Davis said that Castro's expected run for the Senate contributed to her decision not to seek the seat.

"There's a reason, for example, that I made a decision not to run in this U.S. Senate seat against John Cornyn," Davis said. "I've been very candid in the fact that my dear friend Joaquin Castro who I'd like to see run. We may have others run in the primary, but I really want to see him on the ballot." Castro is the brother of former San Antonio Mayor Julián Castro, who's running for president.

Davis said on the podcast that she'll announce a decision on her political future "hopefully in the next month or so," and that it will depend in large part on whether she thinks she can win.

"I'm trying to take a really pragmatic look at that," Davis said. "I want to make sure that we have the ability to win it, and I believe we do, and I want to believe I'm the right person to help us do that. Because for me, more important than anything, is that we have Democrats winning these seats — not necessarily that it be me."