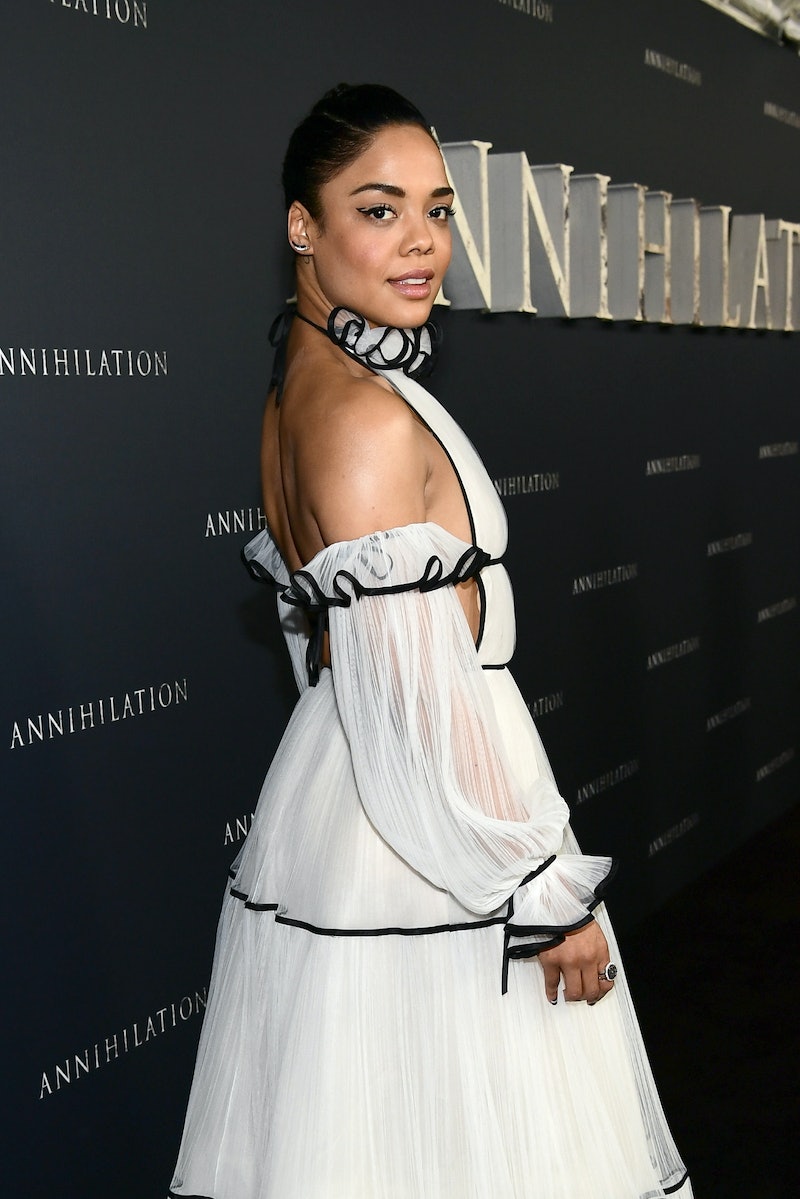 It's a conversation that's been had across Hollywood time and time again, and yet it doesn't seem to be going anywhere: Why aren't there more women working behind-the-scenes in film? And why are the women portrayed on screen not nearly as diverse or inclusive as they should be? The answer is layered, and certainly not an easy one, but those involved in the film industry and beyond continue to search for an explanation. According to Tessa Thompson, who stars in Annihilation, out Feb. 23, a possible answer — and solution — might come in the form of the people reviewing the movies.

"I think that we're in a time of a real seismic shift, particularly in our industry, but also all industries, says Thompson, speaking during the LA press day for Annihilation, Alex Garland's new sci-fi film. "It's not just that we have to change the makeups of our workplaces and make them more safe, make them more equitable, but we have to change the content that gets to be made."

Content featuring women of every ethnicity made by women of every ethnicity is the goal, if an obviously difficult one to achieve right away. But to Thompson, one solution is found in the form of those who write about movies. "Film critique is a huge part of it because there is still a real imbalance in the kinds of journalists who have access to review films," she explains.

In looking at the statistics, it's clear Thompson is absolutely right. According to the Center for the Study of Women in Television and Film at San Diego State University, men comprise a whopping 73 percent of top critics on Rotten Tomatoes, and that leads to them having a large amount of influence on the reviews the public later reads. "[Film journalists] are often able-bodied, white, cis males," explains Thompson. "This means that there is some content that maybe doesn't speak to them. Unfortunately, when they don't review [these movies] well it limits films' ability to do well in the marketplace."

To break it down, Thompson is suggesting that when movies are made for audiences outside of a white, cis, male perspective, they might not be reviewed favorably, or at all. Of course, this isn't always the case, but it could contribute to why the types of films that have been made for an eternity mostly speak to one specific audience, rather than the general population — despite people from all backgrounds, races, genders and more going to theaters on a regular basis.

Of course, lack of representation and inclusion is not just a problem inside the critics' circle, as Thompson knows all too well. "It's the same thing for us. We're in this position now as actors, as directors, as producers, to say, 'We want our work spaces and our crews to reflect the world we live in, "we want to see this content,'" she says. "I'm hoping that we take that power and we take the space to organize together and start working towards it."

And this is something every woman (and man) can do in their own fields, within or outside of the entertainment industry: follow Thompson's lead and ask for inclusion, demand representation, and offer solutions that will create tangible change.