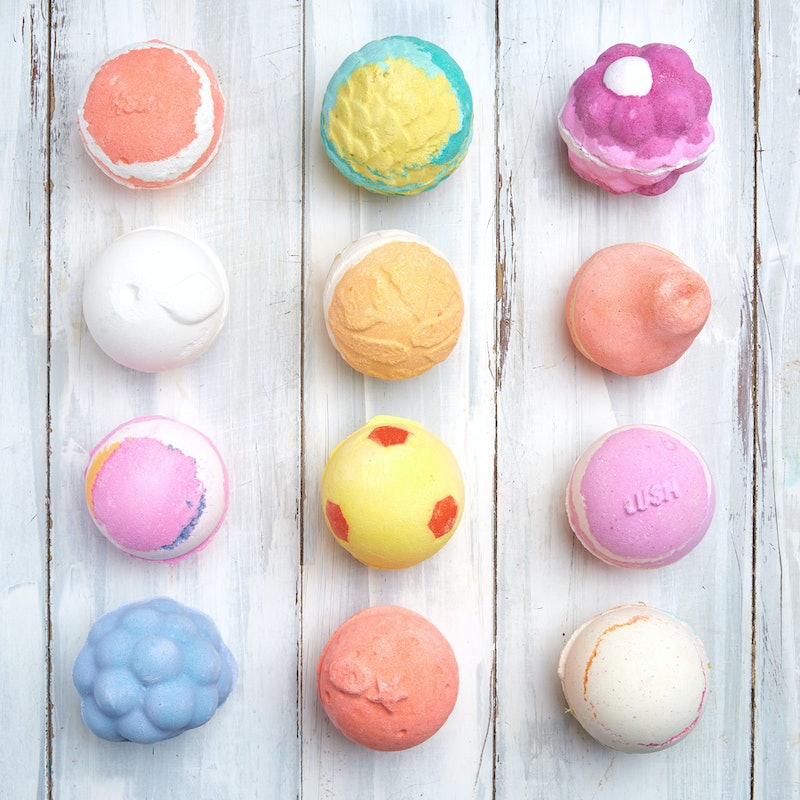 When you think of LUSH, you probably think of bath bombs, and that makes totally sense. They did create them, and they certainly know that they're basically synonymous with the brand. Now, LUSH's new bath bombs are coming, and the fragrances were chosen by those who love LUSH's fizzers the most: the customers.

LUSH isn't just releasing two or three new bath bombs with scents chosen by their customers. They're launching a massive 12 new bath bombs featuring new and old favorite fragrances scented like everything from blackberries to cardamom and clove.

As for where you'll be able to buy the new bombs? They'll be available exclusively online and will retail for $5.95-$7.95. Plus, because LUSH is committed to ridding the world of animal cruelty and giving you the most lux and ethical bath possible, all 12 of the new bath bombs are both cruelty free and vegan.

According to the brand, the new bath bomb scents were voted on directly by Lushies (the nickname given to fans of the brand) which means these scents are fan favorite staples and new smells that fellow LUSH shoppers will flock toward. If your fellow Lushies helping choose new scents makes these new bombs a must-have, they'll be up for grabs on Dec. 26th.

What are the new (and old) bath bombs, and what do they smell like? Get ready to add 12 new items to your holiday wishlist.

LUSH's famous American Cream Conditioner scent now comes in a bath bomb! If you've never used the hair product before, this bomb has a hint of strawberry mixed into an aroma of vanilla.

You've probably heard of Honey I Washed The Kids before, and it was just made into a body spray! Now, get this fan favorite scent in vanilla caramel bath bomb.

Like Honey I Washed The Kids, Olive Branch was also made into a body spray, and the fact that it's getting another new iterations just proves how popular it really is.

LUSH's new Blackberry Bath Bomb is actually an oldie but a goodie. It's one of the very first bombs that the brand ever made and features notes of neroli and lemongrass.

This new bath bomb probably looks ultra-familiar because it's inspired by the fan favorite bubble bar of the same name. If you love The Comforter bubble bar, you'll definitely want to get your hands on its new bath bomb counterpart.

Called a mermaid bath bomb, this newbie from the brand has hints of lemon and will make you feel like Ariel herself.

Tender Is The Night Bath Bomb

If you've used the massage bar of the same name, you know that this vanilla and ylang ylang scent is perfect for a romantic bath.

Just how good is this bath bomb? According to Lush one user proclaimed that their dreams would come true if it were made.

This fan favorite fairy-tale inspired holiday bath bomb is back and ready for customers' tubs!

Golden Pear is actually available right now as a soap, but come Dec. 26, it can be all yours in a bath bomb, too!

Like Golden Pear, this bath bomb used to be a soap, and now it's all yours in its new form!

If you want to shop LUSH's new fan-favorite scent bath bombs, mark your calendar for Dec. 26. You don't want to miss these faves.