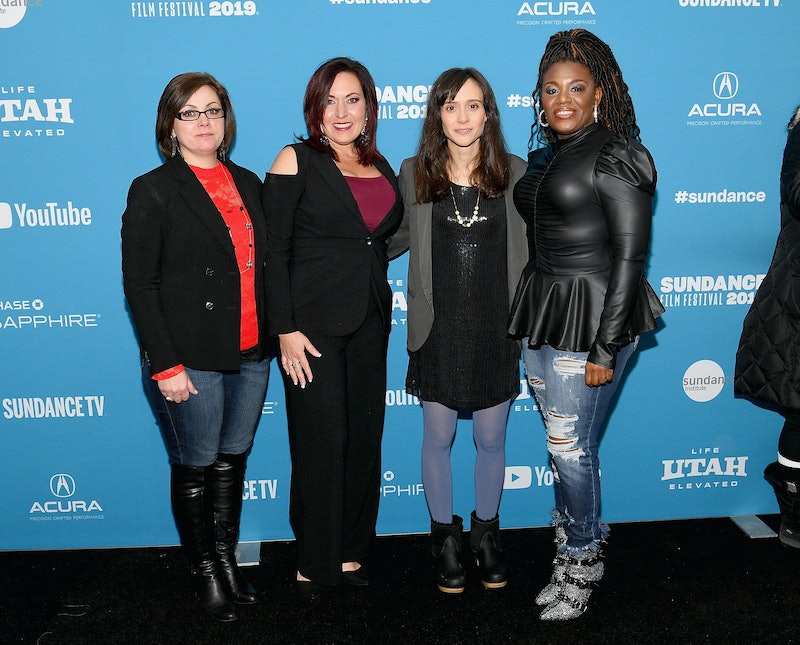 The new Netflix documentary Knock Down The House, streaming now, follows the primary campaigns of four women on a mission, determined to win Congressional seats and truly represent the people of their districts. Alexandria Ocasio-Cortez of New York, Amy Vilela of Nevada, Cori Bush of Missouri, and Paula Jean Swearengin of West Virginia all ran grassroots campaigns against well-known (and well-funded) male Democratic incumbents, centered around deeply personal issues they felt weren't being addressed by the current administration. So what are the Knock Down The House candidates doing in 2019? They're all still fighting to get their message heard.

Of the four women followed in Rachel Lears's documentary, AOC was the only one of the four to win her seat, and between her Twitter clapbacks, vocal Congressional presence, and ability to set established Republicans' teeth on edge, she's the most visible and well-known of the group today. The film shows her still working her bartending job as she slowly builds up campaign support, and it's easy to see — because the film literally shows — how she won the seat against New York Rep. Joe Crowley, who thought so little of his competition he didn't even bother showing up to their first scheduled debate. She's currently fighting to get a Green New Deal passed in Congress.

Paula Swearengin hails from Coal City, West Virginia and a long line of miners. In a 2017 interview with The New Republic, she was clear about her reasons for entering the race. "I don’t have a political background, though I’ve been an activist fighting for my community for years," she said. "The reason that I decided to get into politics is because I have begged, pleaded, and cried for years for our government to listen to us and they haven’t... the economic structure that we have now is detrimental to our health, our heritage, and the environment."

Her grandfather and all her uncles suffer from Black Lung, a mining ailment that's recently seen an uptick in the Ohio Valley area, per Ohio Valley Resource. Though she lost the primary against conservative Democrat Joe Manchin, who frequently votes along Republican lines and refused to support the Equality Act protecting rights of LGBTQ+ citizens, Swearengin isn't done. She announced her candidacy for 2020 at the Sundance premiere of Knock Down The House, telling the Herald Extra, "It’s survival for me. I love my home state. I love the people there. The people live in impoverished conditions comparable to a third world country… It can’t happen like this in America."

Unlike the other women, Cori Bush's 2018 run wasn't the registered nurse and pastor's first brush with politics; she ran in 2016 for U.S. Senate, but lost the primary. After the 2014 shooting of Michael Brown, she became an organizer in the Black Lives Matter movement in St. Louis, which she told Refinery 29 prepped her well to represent her district. "An activist has that love of community and that ability to fight even when folks are fighting you back. I think in the same way, that is what our Congressperson should do. That title is 'Representative' — and you have to be an advocate. I bring that to the table."

At the Knock Down The House Sundance premiere, Bush also announced she'd run in the 2020 Congressional race for Missouri's 1st District again, and is the first candidate for 2020 supported by left-leaning political action committee Brand New Congress, who supported the previous campaigns of her, Paula Jean Swearingen, and AOC.

Amy Vilela was compelled to enter politics after her 22-year-old daughter Shallynne died not from a blood clot, but from delayed treatment of it due to health insurance issues. In her initial announcement of her run, Vilela told the Las Vegas Sun, “I had to do what no parent should have to do, and that’s hold your child as they die a needless death." Though she lost the crowded primary, with five total candidates running for one seat, she won a major battle in her fight for better healthcare: in December 2018, winning Democratic representative Ruben Kihuen cosponsored the Medicare for All act in honor of Vilela's daughter.

Vilela's also proud to have been part of the overall push forcing all candidates to address issues previously unaddressed in their political platforms, as she notes on Twitter.

She's still deeply engaged with politics on social media, and is a Bernie Booster for Sanders' 2020 presidential run. In the same Herald Extra interview, Vilela noted, "There is a whole movement that’s happening not only in our districts, but across this country. I think none of us are done. It’s not over. We’re not done.”

Variety quotes AOC in Knock Down The House comforting a candidate who lost, telling her, “It’s just the reality that in order for one of us to make it through, a thousand of us have to try." She couldn't have known how true that was at the time, but with all three women still deeply involved in politics, it's likely that more will make it through come 2020.

More like this
Women Around The World Are Cutting Their Hair In Solidarity With Mahsa Amini
By Darshita Goyal
These 25 Female Governor Candidates Won Primaries & Could Make History
By Tess Garcia
What’s New On Netflix: Ana De Armas’ 'Blonde' & A Nick Kroll Special
By Arya Roshanian
These 25 International Horror Movies On Netflix Prove Fear Is A Universal Language
By Bustle Editors
Get Even More From Bustle — Sign Up For The Newsletter