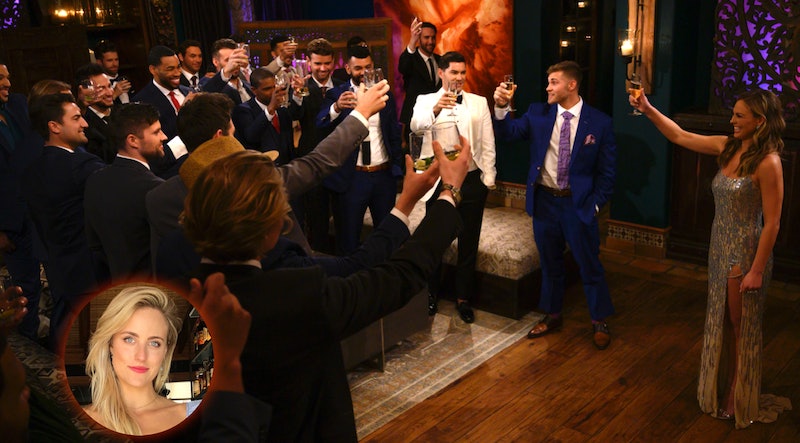 While competing on Arie Luyendyk Jr.'s Bachelor season and Season 5 of Bachelor in Paradise, Kendall Long experienced love and heartbreak on national television. Now that she's been through it all, she has plenty of words of wisdom for new contestants, and she's dishing all to Bustle. Read what Kendall has to say about Bachelorette Hannah Brown's men in this week's recap.

The Bachelorette started out with a roar!

This season looks like it will be filled with a lot of intriguing gentlemen vying for Hannah’s attention. Some came in boxes, some in tractors, and others came in with a literal roar... jumping out of the limo’s sun roof, gorilla-style.

One thing that is starting to grow on me is the selfie-style intro videos. We saw them first on Colton’s season, and this time, some of the new suitors were vlogging their trip to the Bachelor mansion. We also got to see an emotional clip of Hannah learning via FaceTime that she's the next Bachelorette, which admittedly made me an instant fan. Hannah seems to be the all-American, sweet and quirky girl of our dreams with her cute dimples and up-for-anything attitude. She kind of reminds me of a Kaitlyn Bristowe with her spunky attitude.

And Now, The Men!

It’s almost impossible to remember names, so I always start off with nicknames, and once it’s narrowed down I *may* start using their real names (coming from someone who was dubbed Taxidermy Girl I think its only fair I return the favor).

The first guy we see comes at us with a lot of energy! His real name is Tyler, but after seeing his intro package I dub thee Footloose! He had some major Kevin Bacon vibes, dimples and all. I also want to mention that he was the first and only guy to take off his shirt this episode AND do a cartwheel. I did end up serenading a taxidermy sea lion in a tree in my intro video, so I know the prep for these things all to well.

Next we have Peter the Pilot. Right off the bat I know he is going to be one of the favorites. Not only could he practically fly Hannah anywhere in the world, but he also kind of looks a bit like Colton… just me? Peter aside, there was also the lesser known pilot, Chasen. And boy did they do poor Chasen dirty. He came in in a nice but normal suit, then in strolls Mr. Peter Pilot in full-on Top Gun style with his flashy uniform. Sorry, Chasen, this Bachelor world is a harsh one.

Some other guys that stood out to me were Mike, the businessman who rocked the turtleneck in his package along with the sweetest grandmother to grace our TV screens; Luke, whose gorilla entrance will forever haunt my me; and Box King Joe, who Twitter was trying to compare to my Joe (Grocery Store Joe). All I have to say to that is… there is really only one Joe for me ;)

And who can forget our favorite country boy, Matt Donald, who is probably the nicest person ever to be on The Bachelorette.

The cocktail party started off smoothly enough. Hannah looked ready to take on the long night in her dazzling dress. (Sidenote: the cocktail party literally lasts from 7:00 p.m. to 7:00 a.m., so that makeup better stick and those heels better be comfy). Luke came in for the first steal, which is by now expected on the first night right after the toast. I can’t decide if Luke is a good guy or a bad guy just yet, but my gut keeps telling me to keep an eye on him.

Luke P. aside, Hannah seemed to really hit it off with a few of these gents. Mr. Rap Man Cam came in hot with the first kiss (let’s not forget he also got the first impression rose from After the Final Rose). Peter the pilot brought Hannah to cloud 9 with their flirtatious chat, and country singer Jed made Hannah all sorts of giddy with his guitar serenade.

But what is the first episode of The Bachelorette without a bit of drama?? We see Demi driving a white van that makes her look like a kindergartener took her mom's car for a joyride alongside Katie. Both were Hannah’s trusted friends on Colton’s season of The Bachelor, and they have a message for Hannah. Demi claims that she got a DM showing evidence that one of the men in the mansion has a girlfriend on the side while filming the show, which is a HUGE Bachelor no-no. Their goal is to out this guy before Hannah gets her heart broken. Good friends causing a bit of drama to spice up the first episode of the season… I like it.

After some investigating, a guy named Scott ends up being the evildoer. To be honest, I was expecting a bit more of a payoff, since Hannah was probably relieved to have an excuse to get rid of this overly nervous guy anyway, but at the same time I was relieved it wasn’t someone in my Bachelorette Fantasy League.

Hannah immediately confronts Scott and demands answers. And being a prideful guy who has just been called out on national television, Scott resorts to the “I’m a cool guy who doesn’t care if you want me to go” attitude and he is sent on his merry way. Way to go, Hannah, for getting rid of someone you probably had no interest in giving a rose to anyway. We are all saved from an evil villain… for now.

After speaking to the men about the whole incident Hannah goes outside for some space to compose herself. I for one feel like no tears should be wasted on Girlfriend Guy, but it does give Luke the opportunity to find Hannah and comfort her after the whole event.

Luke’s act of chivalry seems to have paid off, because he was rewarded the first impression rose, which means we will be seeing more of him next episode. For the rest of the guys who weren't so lucky, it's time for a nerve-wracking rose ceremony. By this time the sun is beginning to peek over the hills and you can tell it’s been a long night for everyone. I for one was utterly exhausted at this point. I was way too nervous to eat or drink anything the whole night, so I stood up on the little bleachers listening for my name and also at the same time mentally preparing myself for a possible rejection and public humiliation. I can only imagine a lot of these guys felt the same way I did, so it's hard to blame anyone who leaves on night one for tears resulting from exhaustion and ego bruising.

The unfortunate few not advancing on this journey of love are: Brian, Chasen, Ryan, Thomas, Hunter, Joe the Box King (There can be only one Joe leaving on night one!) and Matt Donald. Nooooooooooooo! My heart aches for poor Matt. As the first episode comes to a close, all I can say is: Who knows, Matt. Maybe we'll see you in Paradise!