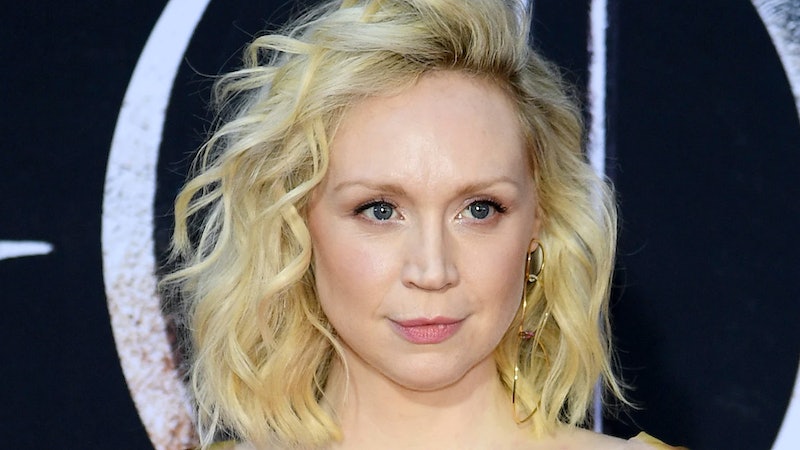 Spoilers ahead for Game of Thrones Season 8, Episode 4. If there's one thing I've learned from Game of Thrones, it's that Gwendoline Christie is an absolute queen. Her portrayal of the incomparable Brienne of Tarth has been one of the highlights of the series, demonstrating that unconventional physical appearance and "lack of" femininity doesn't affect a woman's ability to kick ass. And judging by Gwendoline Christie's recent comments on Brienne, the actor has also recognised how important this character has been for women for the past six years.

Speaking to Variety, Christie discussed how Brienne's choice to be intimate with Jaime Lannister (played by Nikolaj Coster-Waldau) let viewers see a softer, more emotional side to the character. "She let her armour down. It was essential for the character to evolve beyond what we'd seen so far, which was her strength and ability at fighting and physical combat," she explained. "We get to see something else of this woman's emotional world and how she's developed over the years."

But as Christie told Entertainment Weekly, when it came to the heart-wrenching moment when Jaime left Brienne for his sister Cersei, Christie was as upset about it as everyone else. "I was so upset for her," she said. "I never assumed they would be together. I didn't think that would happen. And now I can feel a million hearts breaking." As she went on to explain to Variety, this scene was also her last on the Winterfell set in Belfast. "It's where the relationship with Nikolaj Coster Waldau first developed," Christie said.

"That day it meant such a great deal because I'm looking around at the crew — some of whom I will not work with again on Game of Thrones — I'm looking at that set which I will not film on again, and it's been an experience that has changed my life beyond all comprehension and afforded me an acting career."

Despite the emotions surrounding Brienne and Jaime's relationship, Christie believed that her story came to a "natural conclusion", and that it most importantly taught her a lot about herself by helping her accept and feel confident in her self-described androgyny, strength, and masculinity. "Brienne really made me examine the parts of myself that I thought I needed to be concealed, that I felt society was telling me weren't good enough," she told Variety.

"I was embarrassed to confront my androgyny, or my strength, or my masculinity, and what I felt about female empowerment and gender politics and the inconsistencies in my body and face. I was forced to confront all of those things to get into the character and that has been a great gift."

As Christie explained in an interview with the Guardian in 2017, her temptation "to bend or break the rules" was often a driving factor in her portrayal of such strong female characters. "Why something isn't the norm is interesting to me. How does something or someone not conform? Why? What is seen as wrong with not conforming? I've always been interested in that — I supposed from a very dull perspective of my own physicality."