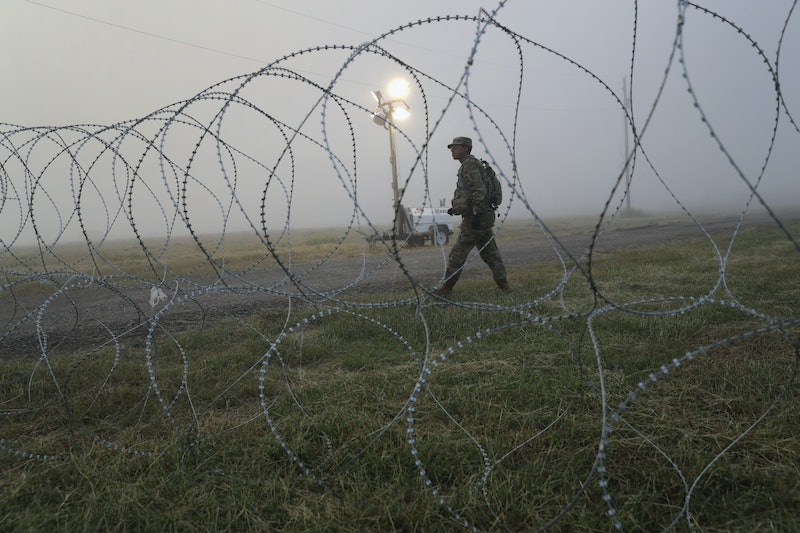 In an early morning Twitter announcement, President Trump accused the Mexican military of holding American troops at gunpoint, and said that he'll be sending "ARMED SOLDIERS" to the U.S.-Mexican border. For those wondering exactly what soldiers are allowed to do at the border, the answer is pretty simple: The same things they're allowed to do anywhere else in the United States.

Two things are worth noting right off the bat. First of all, there are currently around 5,000 active duty soldiers at the U.S.-Mexico border, and according to Reuters, some of them are already armed. Secondly, although Trump proclaimed that he'll be sending (presumably additional) armed troops to the border, the Pentagon hasn't confirmed this yet — and Trump has a history of announcing defense-related policies on Twitter before actually giving the Pentagon guidance for enforcing those policies.

With that out of the way, any armed troops at the U.S.-Mexico border are bound by the same rules of engagement that govern all domestically-deployed U.S. troops, Military Times reports. Those are all outlined in the Chairman of the Joint Chiefs of Staff Instruction 3121.01B, “Standing Rules of Engagement, Standing Rules for the Use of Force by U.S. Forces," according to the publication.

Those rules of engagement are around 30 pages long, but they do permit the use of weapons in certain situations. Additionally, a Cabinet Order signed in 2018 by then-Chief of Staff John Kelly permits border troops to take all military actions that are "reasonably necessary" to protect federal personnel, "including lethal force, where necessary").

As Military Times notes, commanders in the field also have the authority to tweak the rules of engagement around the margins, but in general, any armed soldiers at the U.S. border will have to follow those rules during their deployment.

It's important to note that a federal law called the Posse Comitatus Act prohibits U.S. troops from carrying out traditional law enforcement functions while on duty. That means that things like arrests, interrogations, evidence collection, stop-and-frisks, and other standard law enforcement duties are off-limit to troops, according to Military Times. This law became relevant after Kelly signed the aforementioned Cabinet Order, as that order also authorized troops at the border to carry out some law enforcement duties. There has been some dispute among legal experts about whether or not this is legal.

In his tweet Wednesday, Trump referenced a Newsweek report about a recent incident between between U.S. and Mexican soldiers at the border. According to Newsweek, two U.S. Army soldiers in an unmarked vehicle were approached by five to six members of the Mexican military carrying rifles near Clint, Texas, on April 13. The Mexican troops detained and "gently searched" the U.S. soldiers before leaving, an incident report obtained by Newsweek said.

Although Trump asserted without evidence that the incident "probably [w]as a diversionary tactic for drug smugglers," Newsweek reports that the confusion actually stemmed from the fact that, in some areas, the legal border between the United States and Mexico doesn't align perfectly with existing fencing on the border. A military spokesperson told the Associated Press that the incident took place on a slice of land that's south of a border fence but north of the actual border, which likely accounted for the confusion.

Although Trump pledged to send (additional) armed troops to the border, he offered no further details, such as when this will happen or how many of them will be deployed.