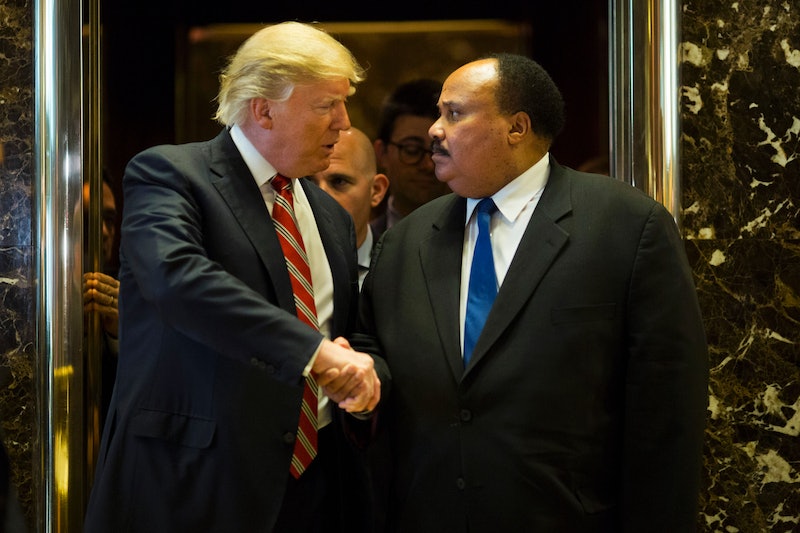 After a weekend of tension between President-elect Donald Trump and the black community regarding his feud with civil rights advocate and Georgia Rep. John Lewis, Trump used Martin Luther King Jr. Day as a way to promote conversation. On Monday, the president-elect spoke with Martin Luther King III at Trump Tower, though King reportedly had asked Trump to meet him at MLK's memorial on the National Mall.

According to the Washington Post, Trump and King talked about voting rights. King, MLK's oldest son, said, "It is very clear that the system is not working at its maximum." King wrote an op-ed for the Washington Post on Jan. 13 that called the voting system broken and detailed suggestions for Trump to improve it. As the president of the public policy think tank the Drum Major Institute, King brought several of his colleagues to the meeting with Trump.

Obviously, this meeting doesn't necessarily mean Trump and King are now friends. It's more likely that King wants to engage in conversation with the president-elect in the hopes that he will be open to listening to those beyond his own political party. King referenced Trump's insistence that he will be a president for all Americans, and said, "I believe we have to constantly engage with pressure, public pressure."

A few days earlier, the civil rights leader Rep. Lewis commented that he does not consider Trump a legitimate president, to which Trump fired back at him on Twitter by saying he is "all talk ... no action." When reporters at Trump Tower asked King about Trump's remarks about Lewis, he defended the civil rights leader — who knew his late father — saying, "I would say that John Lewis has demonstrated that he is action."

Trump and Lewis' public comments about each other have caused some tension between the president-elect and members of congress, and some announced that they will not be attending Trump's inauguration. However, it seemed that King was interested in moving past the exchange between Trump and Lewis to focus on other matters at hand, like voting accessibility.

It is important that following Trump's electoral college win that we all put pressure on him to carry out policies that will benefit all Americans, not just some. Trump has already spoken to various politicians, celebrities, and prominent people since the election, and hopefully will continue to meet with those on both sides of the political spectrum so he can indeed work for everyone.