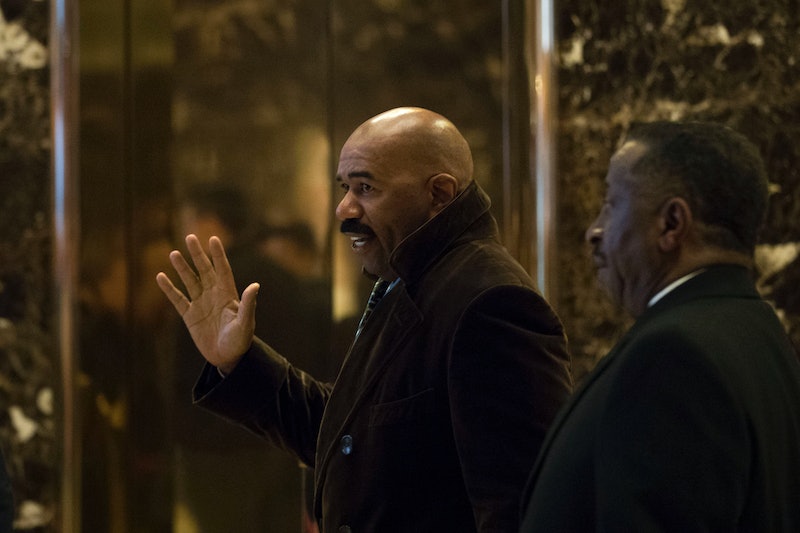 Comedian and television host Steve Harvey met with Donald Trump Friday, prompting intense confusion from social media users. Speculation on the meeting ranged from a Trump family Family Feud appearance to a mix-up in the election results (referencing Harvey's famous flub from the 2015 Miss Universe pageant), but no answer was more probable than another. Most succinctly, one user commented, "WHAT DOES THIS MEAN?!?!"

According to Reuters, Harvey will be working with potential Housing and Urban Development Secretary Ben Carson on an "inner city initiative" that is apparently already in the planning stage. This partnership actually makes more sense than it may appear to at first — Harvey is very active in mentoring inner city black youthin the Los Angeles area with his charity the Steve and Marjorie Harvey Foundation, as well as a supporter of the United Negro College Fund. Though Harvey was initially reticent to support Trump during the campaign, he seems to hqve reconsidered his position in the hopes of moving his charity work to the federal level.

Harvey's widespread popularity may also benefit Carson, who has suffered from criticisms that he's unprepared for the job. Carson's main and most often touted qualification for the HUD leadership is that he grew up in poverty (though not in public housing as was once reported). It doesn't at all help the fact that Carson is completely unexperienced in managing a bureaucracy of the size and importance as the HUD department, but the optic is nice. By partnering with a generally popular leader in the black community, Carson, and Trump, may have finally gained some good P.R.

However, Trump will also have to tread carefully in this territory since coming under fire about his lack of rhetorical distinction between inner cities and black people. America's "inner cities," which isn't really an accurate term to represent poverty in this country, are more racially diverse than rural and suburban areas (though de facto racial segregation in those areas can be a related problem). Though Harvey once stood pretty firmly against Trump, he will hopefully help the president-elect better understand the nuances of racial identity and the black experience in America.

Though initially a head scratcher, Trump and Harvey's meeting makes a surprising amount of sense, and could hopefully bring about a lot of good in the near future. It's always difficult to see anyone cooperating with Trump, but this seems like a good cause that Harvey is really passionate about, so this is one instance when he can be lauded for approaching "the other side." If Harvey is able to expand his philanthropy and provide opportunity to disadvantaged kids across the country, it's a job well done.