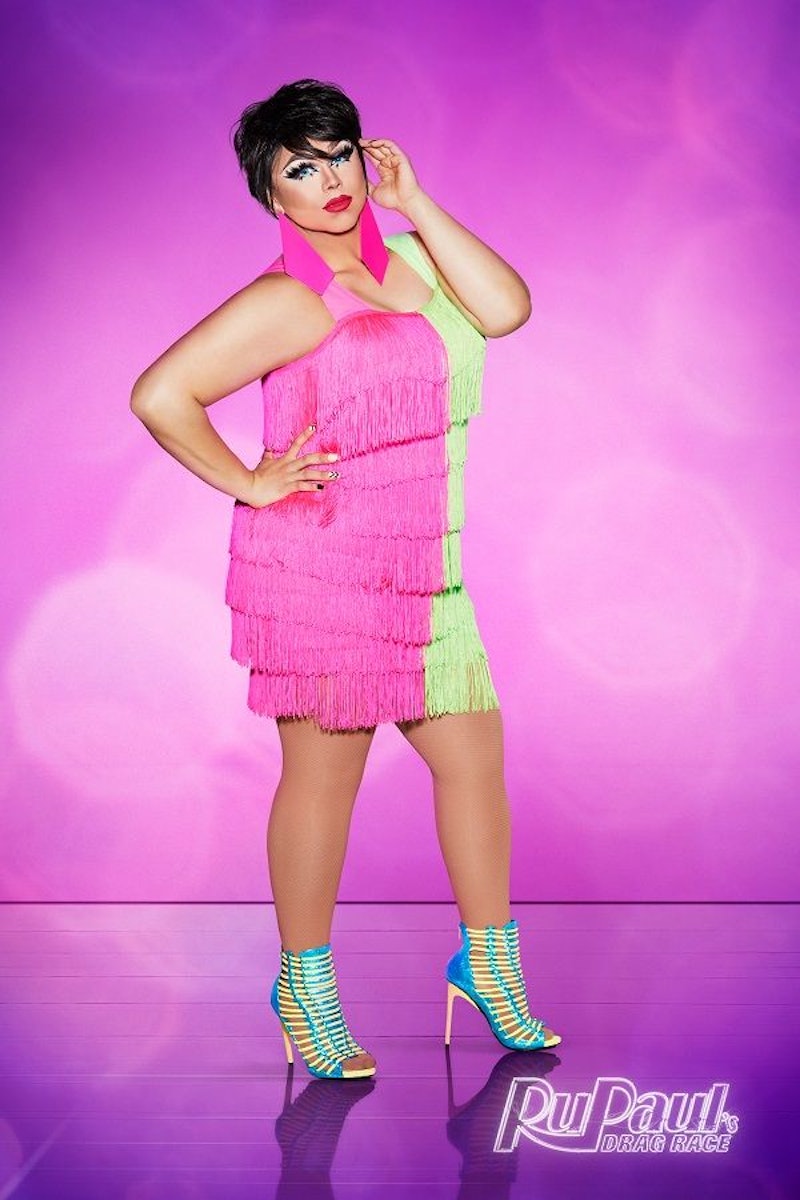 You’ve heard of Kris, Kim, Khloé, Kourtney, Kendall, and Kylie, but what about Kalorie? With a new season of RuPaul’s Drag Race comes new contestant: Kalorie Karbdashian-Williams — clearly, a play on the iconic Kardashian name. But with that teasing nod of a name, fans may wonder what the Kardashians actually think of Kalorie Karbdashian.

Kalorie, a 27-year-old queen from Albuquerque, New Mexico, is just one of the 14 Drag Race contestants vying for the crown on Season 10. In an interview with VH1 done before the new season, Kalorie said she is all about positivity, in both body and in relationships with the people around her. “I’d like Kalorie to be known for being kind. One of the biggest things that my mom always taught me was to always be kind to people,” she said. “ I could be just saying I want to be kind because it starts with a 'K' but I’d really like for people to remember me for being kind.”

Of course, she’s got a competitive edge, too, as she won the title of Miss Duke City, back in 2016. Perhaps that means that she will be able to take the Drag Race Season 10 crown, too.

Kalorie came by her stage name naturally, having been a loyal fan of the Kardashian family for years. In that same interview with VH1, she revealed how the famous family inspired her name. “I’ve always been obsessed with the Kardashians. They embody everything that Kalorie wants to be. They’re 100, they’re sexy, and they take their jobs very seriously,” she said. “But realistically, being a big girl, I knew I was never going to fit in with the Kardashians, so I figured I'd be the wicked stepsister and become Kalorie Karbdashian.”

Fans will remember that just last year on Season 9 of Drag Race, Kris Jenner was shown to be massively supportive of the series. Following the airing of “Kardashian: The Musical,” RuPaul showed a video of Kris praising the performance and the season. "Hey everybody, best season ever,” she said. “The best part [was] the Kardashian musical, that I loved. And Alexis Michelle, your Kris Jenner was dope. So, have fun you guys, and condragulations."

Even before last season, the Kardashians had been voicing their support for RuPaul’s Drag Race. Back during the 2014 season of Drag Race, Khloé was a guest judge on two different episodes. She spoke about the experience in an interview with Us Weekly. “I've been a huge fan of RuPaul's Drag Race for years. Every episode is packed with glamour, beauty secrets and fashion — all things I love," she said. "It really was a dream come true to be a guest judge this season. My favorite part was working with RuPaul who is a legend and getting to know the contestants — they are all so talented. I am cheering for them all!"

It is much too early to tell just how far Kalorie Karbdashian will go in Season 10 of Drag Race. However, Kalorie has based her drag identity off of a family of people that are wildly popular and successful with recent estimates of their net worth being over $100 million dollars. While Kalorie may not have that, perhaps she will be put on that same path to success if she winds up being crowned queen and given that $100,000 prize.

More like this
Rachel Fuda Gave Birth Just Weeks Before 'RHONJ' Season 13
By Brad Witter
Danielle Cabral From 'RHONJ' Is No Stranger To Reality TV
By Brad Witter
David Schwimmer & Gemma Collins Join 'Celeb Bake Off' & Twitter Can't Cope
By Sam Ramsden
Erika Jayne's Estranged Husband Tom Girardi Has Been Indicted On Fraud Charges
By Jake Viswanath
Get Even More From Bustle — Sign Up For The Newsletter
From hair trends to relationship advice, our daily newsletter has everything you need to sound like a person who’s on TikTok, even if you aren’t.