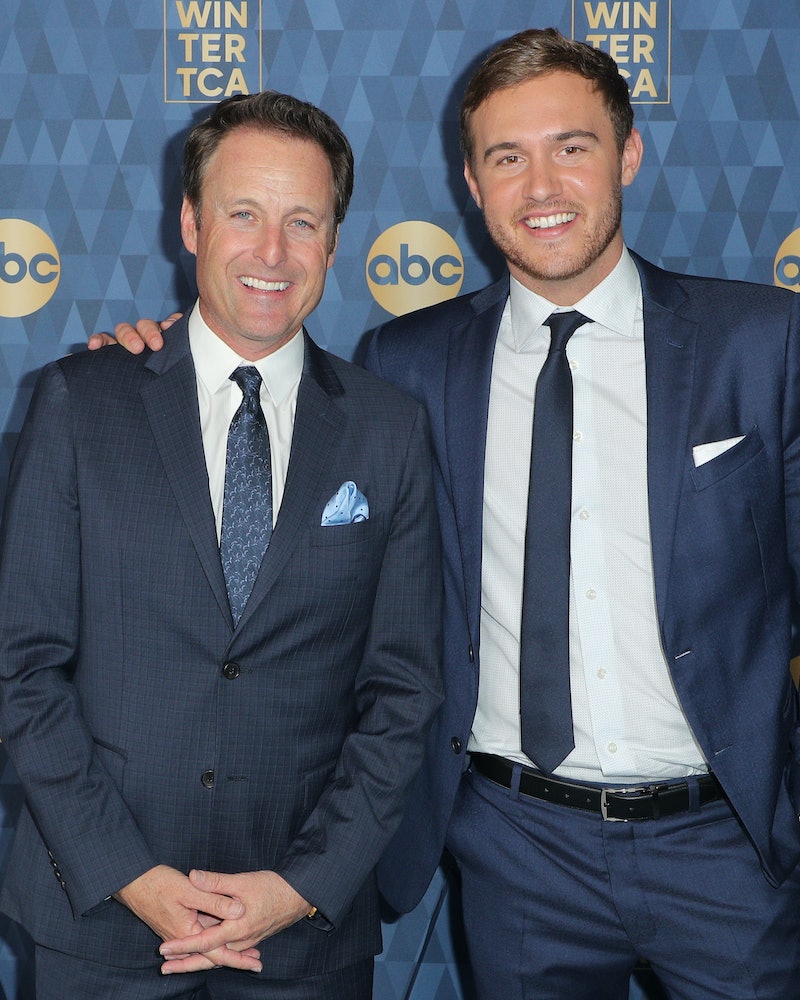 Peter's season of The Bachelor has, indeed, been one of the most dramatic ones yet, but there's still more drama to come, thanks to whatever Chris Harrison finds out in the Bachelor finale, as teased in the newest promo. Even before episodes began airing back in January, both Peter and Harrison have been teasing the fact that this season is "unlike any other" and that the finale will leave viewers completely stunned. As a result, Bachelor Nation has come up with plenty of theories about the ending of Peter's series, many of which hinge on a dramatic conversation between the host and the Bachelor.

"Before you do what you're about to do, there's something you should know," Harrison says in the previews to a confused Peter, who is standing in the Australian outback holding a diamond ring. "There's something we all just found out." That one clip has appeared in every single promo for Peter's season, along with a shot of Peter's mother, Barbara, tearfully begging her son, "Don't let her go." While The Bachelor producers have managed to keep Harrison's big news under wraps thus far, it's clear that the conversation will occur around the finale, and that it plays a role in Peter's "turbulent" ending.

"You won’t predict how this comes to a conclusion," Harrison told The Hollywood Reporter back in January, but that hasn't stopped Bachelor Nation from coming up with a few theories about what will go down in the finale. Here are a few theories about the shocking news that Harrison "just found out" before Peter's proposal.

A Bachelor Producer Has Feelings For Peter

Peter has stated multiple times that nobody will "spoil" the ending of his season — and some fans on Reddit think that it's because he won't end up with any of the women fighting for that final rose. Instead, some fans have theorized that Peter is dating Bachelor producer Julie LaPlaca, and that he decides to run away with her at the end of filming, rather than proposing to either of his final two choices.

Reddit user krallie — who initially proposed the theory — pointed out that Julie has appeared in quite a few Instagram photos with Peter and his family, and his father even shared a photo of her celebrating New Year's Eve with them on his own social media account. Based on her relationship with his family, Peter's mom could be referring to Julie when she tearfully tells him to "bring her home to us," especially if they have seen the pair's relationship grow off screen.

Despite the compelling social media evidence of a possible relationship, Reality Steve shot it down on Twitter, stating that it was the result of fans "grasping at straws." On Feb. 10, ABC executive Ron Mills addressed the rumor, telling Entertainment Tonight that he was "not going to confirm or deny" reports that Peter ended up with a producer, but stated that he didn't think the show would ever be able to top it, if that were the case. What he did confirm is that the finale is "a roller coaster, but I would say even now the roller coaster hasn’t ended."

One Of The Contestants Is Pregnant With Peter's Child

Ever since Hannah Brown admitted that she and Peter "had sex in a windmill" — four times, as she revealed on the Men Tell All special — it was clear that sex would be a big part of Peter's Bachelor storyline. In the preview aired after Feb. 10's episode, Peter admits to one of the girls that he was "intimate" with at least one of the remaining women, so naturally, fans are speculating that he may have gotten one of the contestants pregnant, and is just finding out in the finale. However, there's not a lot of evidence to support this theory, other than a quote from Harrison to ET stating, "Peter and I ... had no idea this was happening and how this was going to all come to an end," and that the finale was "riveting" and "breathtaking."

Despite the fact that he told Madison that he's "falling in love" with her in Peru, it seem like the road to love won't be smooth for these two, as Madison has yet to reveal to Peter that she's saving herself for marriage. In the most recent preview, she says that "if he sleeps with anybody else, it's going to be hard for me to continue forward," before Peter reveals that he has, indeed, been intimate with someone.

Based on all that evidence, it seems likely that Peter could have decided that Madison is the one for him, but that their differing values around sex could be a deal breaker for her, causing her to leave the show. The previews also feature Peter saying that his "heart is broken," which would make sense if Madison self-eliminated, and since Peter's family met her early on in the season, she could also be the person that Peter's mom is talking about in their tearful conversation.

Harrison also told Good Morning America ahead of the season premiere that "it's possible [the season] is still not over," implying that the real finale could take place at the After the Final Rose special. If Madison decided to leave, Peter could have gone after her, and is planning to either win her back or propose to her at the finale, as the real ending to the season.

Madison Did Leave, But She's Returned To The Show

It seems clear that Madison and Peter's different values will cause a rift between the two of them, which makes it possible that Madison does leave the show as a result. We know that Peter has strong feelings for Hannah Ann — after all, she got the coveted First Impression Rose, and he tells her father that he's falling for her — so it's possible that he could decide to propose to Hannah Ann in the end, only to hear that Madison has decided to come back to the show. It would make the decision a lot harder for Peter, as he definitely has the strongest connection to both women, and could cause him to doubt which one should get his final rose.

Hannah Brown Returned To The Show

Since the season premiere, there has been a vocal contingent of Bachelor Nation who have hoped that Peter and Hannah Brown will decide to get back together in the end. Their emotional reunion proved that both she and Peter still have lingering feelings for one another, and he has even revealed that he considered leaving The Bachelor in order to be with Hannah. While it seems like he has moved on and is focused on the women competing for his heart, it's possible that if Peter heard that Hannah came back for him, he could ultimately decide not to propose to either of his final two choices, and decide to run away with her. Plus, we know she's met his family, so it's possible that Peter's mom is a Hannah B. fan as well.

Despite all of these theories, there's still only one thing that Bachelor Nation knows for sure about the finale to Peter's season: it will be the most dramatic ending yet.