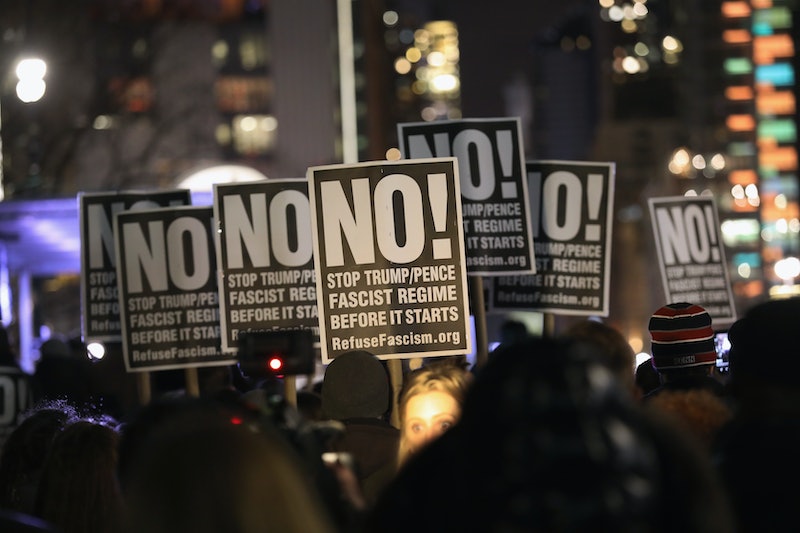 On the eve of inauguration, protests got underway to speak out against the swearing in of Donald Trump. As protesters gathered outside the National Press Club where the "DeploraBall" was taking place, photos of the demonstrations were posted on social media, and there was one hashtag that stood out: #disruptj20. If you're wondering what Disrupt J20 means, it's actually a lot simpler than you might think.

The protest group is calling for a "bold mobilization against the inauguration of Donald Trump," according to its website. Inauguration Day takes place on Jan. 20. Hence, the group wants to disrupt the events of Jan. 20. "It must be made clear to the whole world that the vast majority of people in the United States do not support his presidency or consent to his rule," the group's call to action reads.

Disrupt J20 has planned several protests throughout the Washington, D.C. area and wants those who cannot make it to the capitol to "take to the streets wherever you are" by calling out of work sick, not going to school, avoiding stores as part of a strike against the day. Demonstrations in D.C. include the "Festival of Resistance: March Against Trump," "Occupy Inauguration," "Qockblockade Brigade: Queer Resistance," and "DSA—Stand Against Trump."

Disrupt J20 organizers told WTOP, a D.C. area radio station, that they're expecting more than 5,000 demonstrators at their protests and marches to fight against Trump. "We believe this is the important work that needs to be done right now; to come together and resist the threats that are coming to our communities from the Trump administration," Samantha Miller, one of the organizers, told the station.

The protests started with the one outside the DeploraBall. On Inauguration Day, the group will gather at Columbus Circle to march to McPherson Square, where they will rally all day long before moving on to protest the inaugural balls as well.

Arguably the biggest protest on Inauguration Weekend will be the Women's March on Washington, set to happen on Saturday, Trump's first full day as president. While Disrupt J20 is not involved with that movement, it does list several women's marches as events to attend on its website, so group members will also likely be calling for action after Inauguration Day, too.