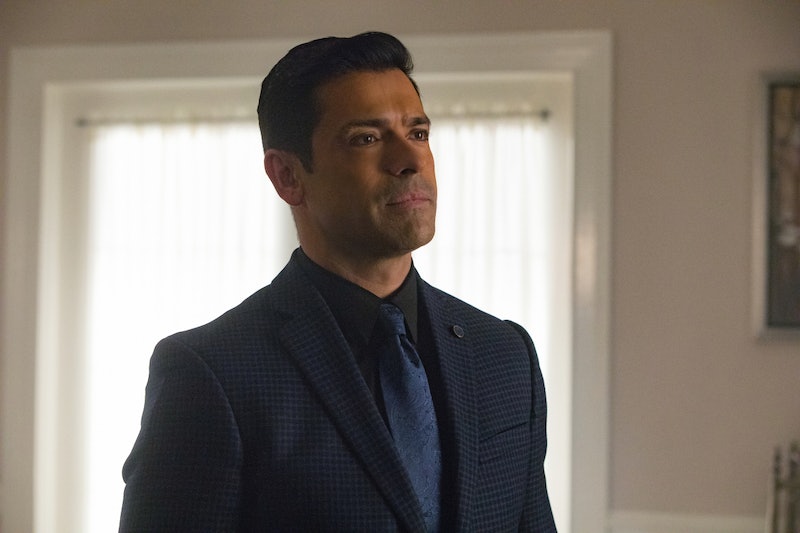 Hiram Lodge is arguably the most powerful man on Riverdale, seemingly controlling events all season. While most characters on the show display a combination of good and questionable qualities, Hiram heavily leans towards evil. And, his introduction to the show was accompanied by Smithers mysteriously leaving without saying goodbye, Pop's being bought by the Lodges, and the mysterious SoDale project becoming a focus in the town. He's been a busy man in town, so, what does Hiram Lodge want on Riverdale? He could be up to something sinister, according to the actor who plays him, Mark Consuelos.

"He wants everyone to trust him and love him and think that he's been reformed. I think this tiger, or leopard, still has spots. He can't change them, they're there ... Just like any sociopath you know, you like him or they make you like them. That's part of their illness and so I think he's got a touch of that. But he's also willing to do whatever it takes to get what he wants and to protect his family."

Consuelos calling his own character a bit of a sociopath can't mean positive things for his plans. Even if his plan details haven't been revealed, the intentions seem shady.

On Jimmy Kimmel Live, shown above, Consuelos spoke bluntly about his character. Consuelos said very directly, "He's a bad guy. A morally ambiguous, will stop at nothing, real estate developer who wants maybe a lot of power, political power included." On Riverdale, it's unclear exactly what Hiram wants to do with all the potential power but it seems to have something to do with the SoDale project.

The SoDale project — at least according to what Hiram says it is — is a development of the Southside set to include a shopping mall, movie theater, apartments, and public parks. It has been Hiram's main focus all season. He's been buying up the Southside, even from prison in Season 1, for the mysterious development project and going to extreme measures to get all the Southside properties. From causing Serpent in-fighting to bribing the mayor, the way in which he's approached the project suggests questionable future use of the land that could affect everyone. He may say it's a casual development project — but his secrecy level suggests there's something us fans don't yet know about.

One person whom Hiram has recruited to help with this shady underworld plan is Archie Andrews. Hiram has become a sort of mob boss mentor to young Archie, offering him an "internship" working for him. It's possible Hiram just wants to get close to Archie because Archie is dating Veronica, but it could also mean Archie plays a role in his future plans.

KJ Apa, who plays Archie on the show, recently spoke with KSiteTV about Archie's relationship with Hiram. "I think there's a part of Hiram that Archie really admires. And I think he sees a lot of good qualities in Hiram despite the bad thing that he's, the bad things that he's done or people think that he's done," Apa said. "But I think Archie sees him as a leader. And I think as his girlfriend's dad ... They need to find a way to be on the same page with each other and that's another thing we're exploring between the two of them."

The complicated mentor relationship of Hiram and Archie is just one of Hiram's questionable relationships. Veronica is in the family business now, Hermione Lodge is always close by, and Hiram threatens anyone who stands against him. The culpability of all those involved with Hiram should become clearer as his intentions do.

It is apparent Hiram is a ruthless man. His security guard is willing to kill for him, his enemies mysteriously end up dead after a poker game gone bad, and everyone seems afraid of him. Hiram has been planing something for the town since he was behind bars. After all this hubbub, it can't be a simple mall complex that he's building, something feels more sinister. Hopefully Jughead (the town's only real reporter, apparently) can dig up some dirt before Hiram owns everything and it's too late to stop him.

More like this
Netflix Shut Down 'Bridgerton' S3 Rumours About A “Very Dark” Storyline
By Bustle
This 'Gossip Girl' Wardrobe Error Has Gone Viral On TikTok
By Alyssa Lapid
'The Last Of Us' Has Officially Been Renewed For Season 2
By Darshita Goyal
Ozzie’s Coming Out Scene With Kitty On 'That ’90s Show' Has Twitter Sobbing
By Brad Witter
Get Even More From Bustle — Sign Up For The Newsletter
From hair trends to relationship advice, our daily newsletter has everything you need to sound like a person who’s on TikTok, even if you aren’t.