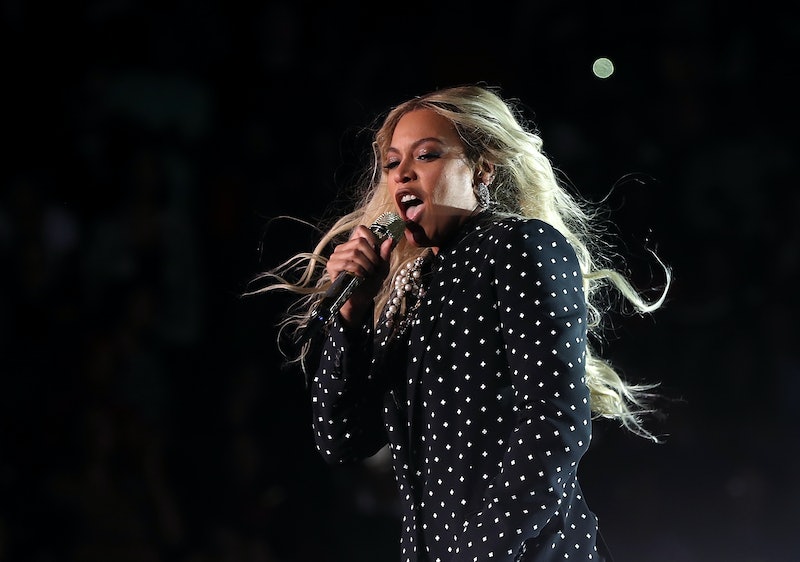 After shocking the world with an extravagant pregnancy announcement photo in February, Beyoncé and Jay Z welcomed two new babies into the world. But now that TMZ is reporting that the Carter twins are named Sir and Rumi, what does the name Rumi mean? The name is an interesting choice, but that was to be expected from the parents of Blue Ivy Carter.

According to NameBerry.com, a leading baby names site, Rumi is a feminine name of Japanese origin. The name means, "beauty," "flow," or "lapiz lazuli." Based on the characters, or kanji, used to write the name, Rumi can also mean "water," or "current," all of which are beautiful, artful descriptions that complement the poetic natures of both Beyoncé and Jay Z's work. One of the meanings of Rumi could also hold a very lovely connection to older sister, Blue. Lapis Lazuli is a blue semi-precious stone that, according to Crystal Vaults, many people over history have held as a "symbol of royalty and honor, gods and power, spirit and vision. It is a universal symbol of wisdom and truth."

Water is also blue, so the spiritual and physical connections abound. They may now have two daughters with a name referencing the color blue, which is a lovely detail.

The most notable person named Rumi is the Persian mystic poet, who was beloved around the world and remains best-selling writer in the United States and beyond. Born Jalal al-Din Mohammad Rumi in the 1200s, his work is still relevant today, often popping up on social media feeds for inspiration. An executive director of Poet's House told BBC of Rumi's work,

Across time, place and culture, Rumi's poems articulate what it feels like to be alive. And they help us understand our own search for love and the ecstatic in the coil of daily life.

Celebrities like Tilda Swinton and Chris Martin have spoken about their love of Rumi's work, and considering his close friendship with the Carters, Martin could have even introduced them to his poetry. While it's not certain yet if Beyoncé named Rumi after the poet or for the color, it's a name that will grab a lot of attention.

More like this
Harry Styles Is Performing At The 2023 Grammy Awards
By Jake Viswanath
Beyoncé & Blue Ivy Performed A "Brown Skin Girl" Duet At Her Private Dubai Concert
By Brad Witter
Adam Levine & Behati Prinsloo Welcome Their Third Child Together
By Jake Viswanath
Meghan Trainor & Daryl Sabara Are Expecting Their Second Baby
By Jake Viswanath
Get Even More From Bustle — Sign Up For The Newsletter
From hair trends to relationship advice, our daily newsletter has everything you need to sound like a person who’s on TikTok, even if you aren’t.