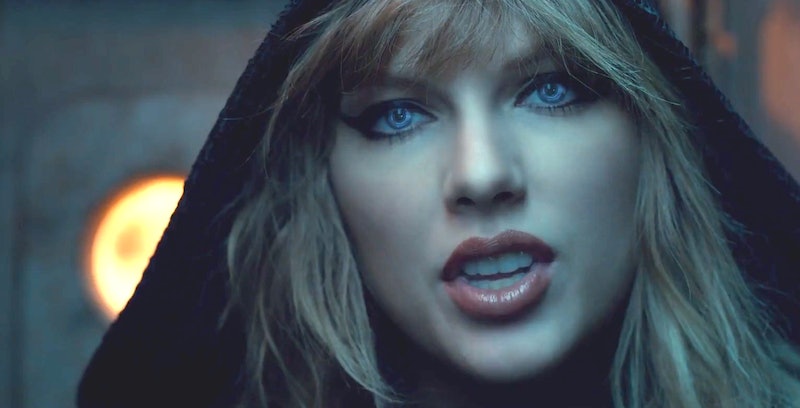 Fans have been waiting all week for Swift's new music video to premiere, and, now that it's finally here, plenty of people are a little confused. So what does the "...Ready For It?" music video mean, anyway? Let's just say that the Old Taylor that she alluded to in "Look What You Made Me Do" is officially still dead, and now we might know what killed her.

The lyrics of the song imply a relationship, but the music video goes another way entirely. Just as her first music video from Reputation introduced us to the idea of multiple Taylors, this one continues this theme, putting two of them face to face: one who's a robot, controlled by outside forces to fit whatever mold they want her to be, and the Taylor who's on the other side of the glass, watching all of it happen. It's hard to tell at first how this inevitable fight will turn out.

It seems like a battle between the manufactured version of Swift that the media and her career have created for her, and the human version of Swift — possibly the one who exists today in this new era of her music. And in the end, humanity wins out.

The manufactured version of Swift is in a glass box, being watched and transformed while she's on display. It seems to be an expression of the way she must have felt over the last few years, and maybe even over the entire course of her career. At first, she becomes a machine, covered in armor, and then, she's a girl on a horse — a possible reference to her Fearless single "White Horse" — and, finally, she's knocked down, which could be alluding to her silence after the media backlash she received following her split from Calvin Harris and the "Famous" debacle with West last year.

At that point, the other, darker Taylor thinks that she's won, but, soon enough, Swift's picking herself up and breaking through that glass. Now, she's strong enough to get back up, and, when she and the other Swift touch hands on each side of the glass, there's a major shift in power. Now, the vulnerable version of Swift has it all.

At the end of the video, the old Swift is seen standing on a stage covered in graffiti that says "they're burning all the witches," which could be a reference to the witch hunt that's been surrounding Swift in recent years between all the Kanye West feud drama and her rumored relationships.

And as for the newly free Swift? She ends the video unharmed and at the top of a set of escalators as a single tear slides down her cheek. Now, she can cry, because she's finally human. Pretty powerful stuff, so it's no wonder fans are having a pretty emotional reaction to this video.

It's not surprising that both of the videos Swift has released so far are commentary on the way she's been represented in the media lately — after all, the album is called Reputation. Swift has always been someone who's exposed her true emotions and thoughts through her music, but this album could go even deeper than that, especially since it seems she no longer plays by anyone's rules but her own.

Some fans may still be mourning the old Taylor, but, if the new one is anything like the newly freed woman at the end of this music video, it looks like they might start changing their tune. And with just two weeks left until her sixth album drops, who knows what else might be in store?