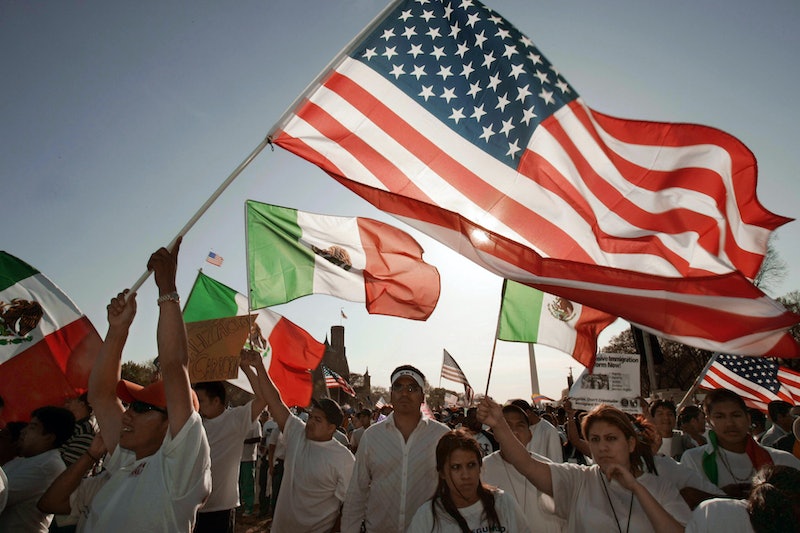 White House Press Secretary Sean Spicer said Thursday that the infamous wall may be paid for by charging a 20 percent tax on all imports coming from Mexico. But if you're wondering what the United States even imports from Mexico, you're in for a surprise. Mexico is actually the third largest supplier of imports to the United States, according to the Office of the United States Trade Representative (USTR).

The top imports from Mexico in 2015 were vehicles, electrical machinery, machinery, mineral fuels, and medical instruments, the USTR reported. But the country is our second largest supplier of agriculture goods, including vegetables, fruit, wine, beer, and snack foods. Yes, if you're worried about your avocados and your Coronas, you're not off base.

It's much more than that, though. Mexico not only provides vehicles and produce, but it also sends us computer and phone equipment, appliances like refrigerators and and air conditioners, as CNN Money detailed last year. And a big tax on imports from Mexico could mean an increase in prices for American consumers. And you know what that means? Essentially, you're still paying for the wall on the border of Mexico and the United States, whether you like it or not.

But one of the most important things about trade with Mexico, as The Hill reported, is that the United States and Mexico actually has a production sharing system — and who knows how that could be affected with this kind of tax. The Woodrow Wilson International Center for Scholars said that 40 percent of the imports coming from Mexico to the United States includes materials that were first made stateside.

So, think of it like this: The United States produces car parts. Those parts are exported to Mexico, which assembles the parts to make a complete vehicle. Then, those cars are imported back to the United States. The Hill reported that over a five-year period, the United States imported $341 billion of cars and car parts from Mexico. Forty percent of that — $136 billion — was what Mexico had originally bought from the United States to install in cars. So, technically, this tax could be taxing our country's own products.