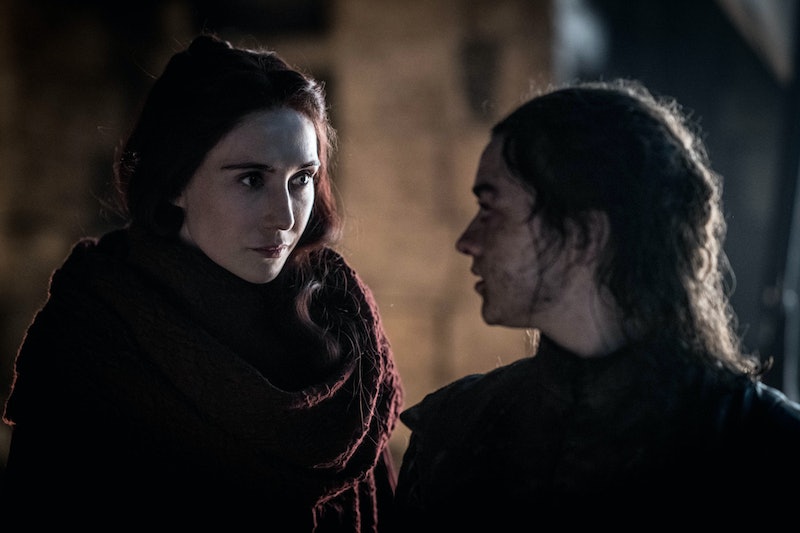 Game of Thrones has become synonymous with deaths that are violent and surprising, but in an extremely rare instance, "The Long Night" gave Melisandre, the Red Witch who worked with Stannis Baratheon before attaching herself to Jon Snow, a peaceful death on her own terms. Indeed, actor Carice van Houten tells Bustle that Melisandre's death on Game of Thrones was far more elegant than she expected.

"It’s a poetic end to her story," she says. Though Melisandre's demise provided a stark contrast to the episode's other far more violent deaths, actually watching her arc conclude on screen sparked some unexpected emotion in van Houten.

The fact that such a long-running and beloved show is ending is certainly emotional for all involved. But there's one specific element from the show that van Houten will miss more than anybody else: Her wig. "It was definitely half of my character — just beautiful, so beautiful," she reminisces. "I won't miss the cold though."

While GoT is still full of dragons and prophecies, the loss of Melisandre also means the loss of the character who encapsulated so much of the show's relationship with magic. Since she first sent a shadow baby assassin to slay Renly, Melisandre has been connected to forces outside of humanity — even if the actor wasn't always aware of that fact. Van Houten reveals that when she delivered the line, "I see a darkness in you ... and in that darkness, eyes staring back at me. Brown eyes. Blue eyes. Green eyes. Eyes you'll shut forever," to Arya back in Season 3, she had no idea she was predicting the end of one of the series' most crucial plotlines.

"I just thought, 'It's probably going to lead to something, I don't know what it is, we'll figure it out. It is certainly significant enough for me to say this,'" van Houten says.

While she's no longer on the show, van Houten is still a fan and will be watching to see if any of the other prophecies of princes promised will come to fruition. But there's one person she hopes to see on the Iron Throne at the end of the series now that Melisandre is out of the running: Samwell Tarly.

"Can you imagine a world where a person like that would be ruling?" van Houten says. "I mean, he wouldn't want to, but he's got a good sense of humor, [he's] humble, he's smart."

While Melisandre was far from a hero on Game of Thrones, her character was more than just crucial to the plot: She also provided a direct line into the world of magic and sorcery on a show often preoccupied with politics. Melisandre put the fantasy in this fantasy show and provided the fire in this Song of Ice and Fire, and for that, we'll never forget her.