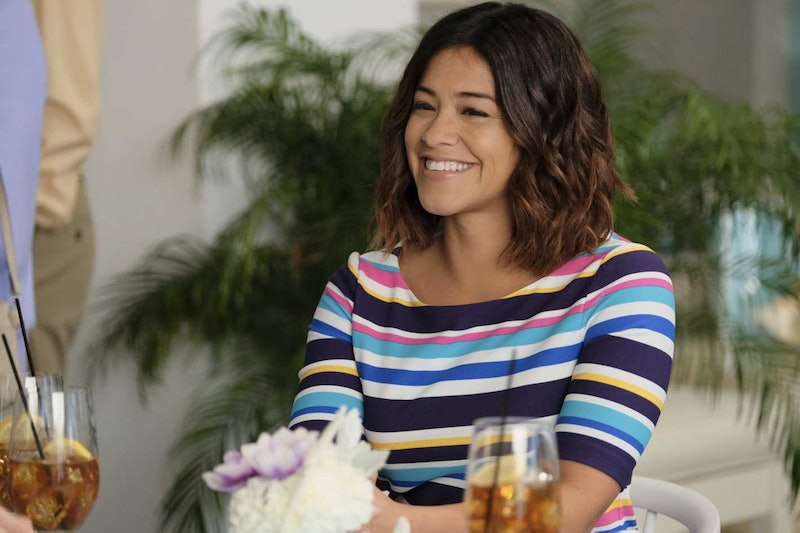 In a totally messy but wildly entertaining year of the CW series, Jane lost her virginity and the love of her life. This Jane The Virgin Season 3 recap will remind you that after two seasons of funny melodrama, the CW telenovela about early parenthood and marriage took a sharp turn into dark and twisty territory with the death of fan favorite Michael, Jane’s new husband. Michael had just recovered from getting shot at the end of Season 2. Then in a seriously messed up chain of events, his blood pressure spiked and he was officially pronounced dead, just as he was in the process of pursuing his new dreams. Why must the universe be so cruel and take away Jane's little slice of happiness? Things were finally starting to look up for the young couple in the first half of Season 3, when Jane became a widow at a tragically young age.

After a time jump, a heartbroken and newly-widowed Jane attempted to pick up the pieces of her life. She strived to move forward for the sake of her son Mateo and the season was a great testament to her strength (and Gina Rodriguez's phenomenal acting skills). But, Michael’s death wasn’t the only thing that kept fans glued to TV screens. Rogelio, Xo, Abuela, Rafael, Luisa, Petra, and all the other characters also went through a lot this year.

So use this guide to study up on everything that happened in the second half of Season 3, before Jane returns for "Chapter 65" on Friday, Oct. 13.

Three years after Michael’s death, Jane and Mateo found themselves living back with Alba. Jane had been working for a book publishing company during this time with a boss she absolutely couldn’t stand. Then the opportunity of a lifetime came. She received a publishing offer for her book that was based off her life with Michael. In the spur of the moment, Jane quit without reading the full offer and had to take up a job as Lounge Manager at The Marbella to help with bills. Bittersweet, but fans finally got to see Jane fulfill her lifelong dream of writing romance novels and being a published author by the age of 30. Additionally she landed a gig as a sex/dating columnist for Cosmopolitan.

Although Rogelio is about to become a father to a child by another woman, Jane’s parents officially tied the knot! Season 3 was a struggle for these two with Rogelio’s baby mama Darci and Xo’s ex Bruce lurking around. Their fairytale day was almost ruined by, you know, little things — like a hurricane and a muddy wedding dress courtesy of Rafael. But luckily the show went on. In the season finale, lit by the glow of candles, Jane officiated the sweet ceremony, saying that her parents weren’t standing there "because they’re meant to be but because they chose each other.” Aw.

Finally allowing herself to date again, Jane struck up a relationship with Fabian, a telenovela actor. He met Jane after scoring a role opposite her father Rogelio, and Jane was instantly attracted to him. Before "Chapter 62," Jane may have only ever had sex with Michael, but at this point in her life all she's looking for is a non-committed fling. Nonetheless she still worried that she may feel guilty about it afterward. But with a little encouragement from her mom, Jane and Fabian got it on. Although when Jane told Fabian that she's not looking for anything serious he flips and basically called her promiscuous. Ouch.

Further down the line, Jane learned of a hidden love letter left behind from Michael and set out to find it. But she had no time. She had a wedding to officiate. During the reception she ended up dancing with Rafael, and the two stood rather close together when a jealous Petra came in and broke up the little co-parent-party dance. A conflicted Jane began to realize that Petra may be right. Does she have feelings for Rafael still? Stay tuned.

Once Petra escaped from the paralysis and took control back from her evil twin Anezka, she demanded that Anezka leave the country, but instead, Anezka married Scott in secret. To fully get rid of Anezka and Scott, Petra posed as her twin and broke up with Scott, who then got drunk and was subsequently murdered by Eileen. Anezka was in prison the whole time, but she'll get out eventually and she's going to be pissed.

In a super random chain of events the two met while Anezka, fresh out of prison, prepared to leave the country. In a “I’ll scratch your back if you scratch mine” moment, Luisa filled Anezka in on Scott’s fate, while Anezka handed Luisa the formerly-shredded, now taped-up addendum to Rafael’s will. Once the two split, they both went on to confront their nemeses. Anezka lured Petra to the boardwalk near the hotel and held her at gunpoint, hellbent on making her pay for taking Scott away from her. With the will in her hands, Luisa now had control over the family fortune and the Marbella and went off to take Rafael and everyone he loves down. "Oh boy!"

Jane Ran Into Her First Love

Oh remember that letter from earlier? Here's how it came to be: Jane found herself thinking a lot about Michael. And in the finale, Father Gustavo mentioned a letter Michael wrote on the eve of their wedding. Alba knew about it too, but had no idea where it is. Jane grew desperate to find it in hopes that this letter would spark her belief in romantic destiny once again. Unfortunately, she came up empty-handed. She returned to her old apartment and begged the tenants to let her rummage through their floor boards to find it. Still nothing. But at her parent's wedding reception she learned that someone — the apartment tenant before the current tenants — found the letter. It was a sweet moment as she read it, and just as she ran outside to find Rafael, she ran smack into the letter deliverer: Adam, her first love. Do we smell the start of Jane the Virgin's newest love triangle?

What will Rafael do once Luisa takes control of Marbella? How will Xo and Rogelio's marriage hold up with the addition of Darci and a new tiny human? And who in the heck is Adam? The soap opera antics will surely continue when Jane The Virgin returns on Oct. 13.

More like this
Rhaenyra's Sons May Not Last Much Longer On 'House Of The Dragon'
By Grace Wehniainen
Nazanin Boniadi Was A Healer Long Before 'The Rings Of Power'
By Olivia-Anne Cleary
The 'Heartstopper' Cast Were Spotted Filming In A Major City
By Nola Ojomu and Sam Ramsden
Nicola Coughlan Shared A Lady Whistledown Excerpt From ‘Bridgerton’ Season 3
By Grace Wehniainen, Alyssa Lapid and Sam Ramsden
Get Even More From Bustle — Sign Up For The Newsletter