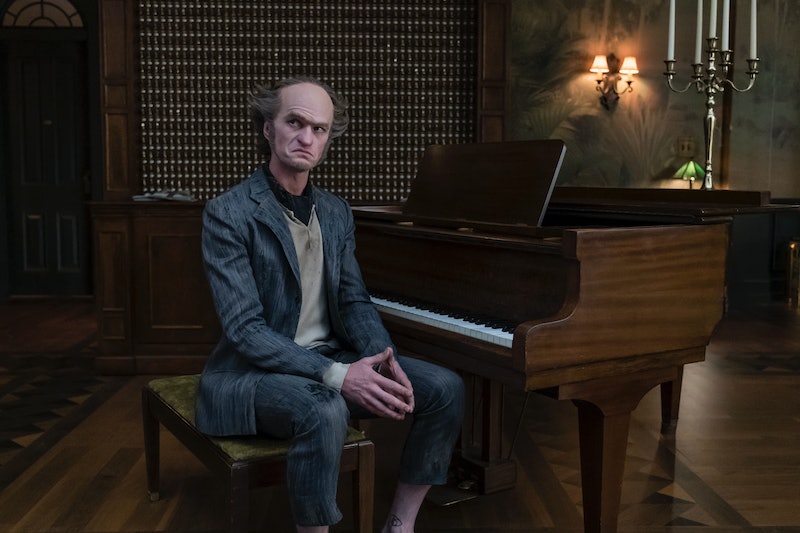 Turns out that Count Olaf and the Baudelaire orphans have more in common than one might think — not that their shared experiences are bringing them any closer together. In the third and final season of A Series of Unfortunate Events, set to premiere on Netflix on Jan 1, we finally learn more about Count Olaf's past, events that shed some light on just why he hates the Baudelaire kids so much. It turns out that Count Olaf is an orphan as well, and the way his father died might reveal the source of his vindictive anger towards Violet, Klaus, and Sunny.

How Olaf's mother died is never revealed in the Netflix series, but the tragic death of his father is told by none other than Esme Squalor, the queen of "what's in" herself. At a trial supposedly to convict Count Olaf for his heinous crimes, but that quickly becomes a ridiculous farcical event (as does most everything in ASOUE), Esme tells the Baudelaires about a fateful night at the opera, a night that changes everything for the VFD, Olaf, and the Baudelaires forever.

The scene plays out as Esme recounts it. Esme, the Baudelaire's mother Beatrice, Lemony and Kit Snicket, and Count Olaf are sitting in a box at the opera.

While Olaf is distracted by his own pyromaniac tendencies (he tries setting fire to the theater curtains) Beatrice and Esme begin to argue over, of all things, the ever mysterious Sugar Bowl. Beatrice tries to convince Esme that there's an insurrection brewing in the VFD, and that she needs to give up the sugar bowl to prevent the organization from splintering in two. "That Sugar Bowl is our only hope," she tells Esme, "it can save lives." Esme refuses, and insists the bowl completes her tea set. Hard to argue with that logic.

Convinced that Esme will never relinquish the Sugar Bowl, (seriously, what is up with that thing?) Beatrice steals it. As she hurries out of the opera box, Esme notices the bowl is gone and rushes into the hall to confront them, armed with her sharp tongue and poison darts, "the season's in-est weapon." But alas! Beatrice and Lemony have also managed to get ahold of some fashionable poison darts.

While Kit tries to diffuse the tension, and Olaf looks ready to grab a bowl of popcorn and watch the drama unfold, Esme refuses to calm down. "Friends don't steal Sugar Bowls," she says, a poison dart pinched between her fingers.

Count Olaf's father steps out into the hallway, ready to order to situation to a halt, when something hits him in the back of the neck: a poison dart, thrown by Lemony Snicket himself. Olaf's father sinks to the ground, and Olaf looks at Lemony in horror and anger. And so the breakup of VFD is solidified.

Count Olaf is clearly still bitter about the death of his father (understandably!) and blames the Baudelaire's mother, and by extension, the Baudelaires themselves, for making him an orphan. The show never explains how Olaf's mother died, but it's clear that she's no longer alive when his father is killed. In the books, both of Olaf's parents are thought to have died that night at the opera (though like many of the books' mysteries, it's never fully confirmed).

Though the circumstances of his father's tragic death don't excuse Olaf's villainous behavior, it does make it a little more understandable. Count Olaf can't get his father back, but he can get his hands on the Baudelaire fortune — maybe for him, getting lots and lots of money is the next best thing.

Do I suddenly feel... bad? For Count Olaf, the ultimate villain? Maybe. But that doesn't mean I don't want to see him outsmarted by the Baudelaires one last time.

Let's just hope no one has gotten their hands on some poison darts.

More like this
Netflix Shut Down 'Bridgerton' S3 Rumours About A “Very Dark” Storyline
By Bustle
Everything To Know About A Potential 'Lockwood & Co.' Season 2
By Gretchen Smail
All The ’70s Easter Eggs You Missed In 'That ’90s Show'
By Grace Wehniainen
'The Crown' Season 6 Has Suspended Filming "Out Of Respect" For The Queen's Death
By Bustle Staff
Get Even More From Bustle — Sign Up For The Newsletter
From hair trends to relationship advice, our daily newsletter has everything you need to sound like a person who’s on TikTok, even if you aren’t.