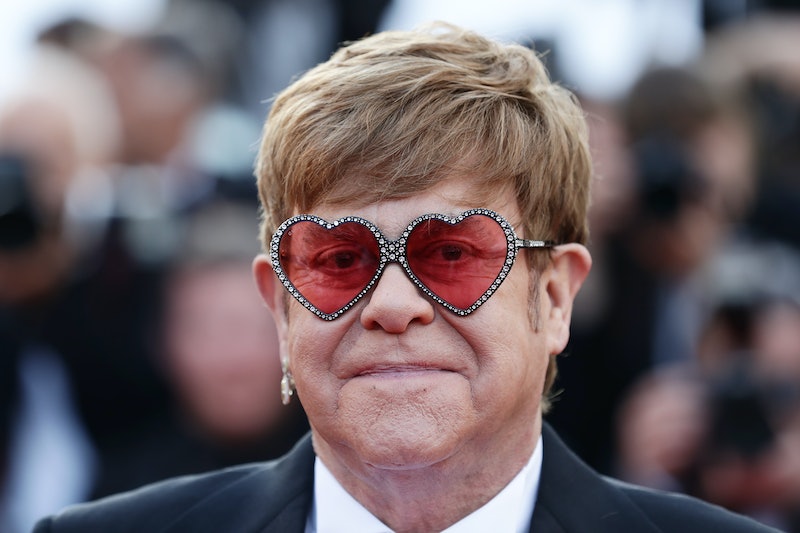 The new Elton John biopic Rocketman covers his life from the musician's rise to fame up to his decision to get sober. And that story very much includes his mother, Sheila Farebrother. The film shows the strained relationship between the mother (played by Bryce Dallas Howard in the film) and son (Taron Egerton), but there's a lot that happened with Elton John and his mother later in both of their lives that's not included in the film.

Farebrother died at the age of 92 in December 2017, which John announced on social media. "So sad to say that my mother passed away this morning," he wrote. "I only saw her last Monday and I am in shock. Travel safe Mum. Thank you for everything. I will miss you so much. Love, Elton."

Only two years before this, John and Farebrother had reconciled after being estranged for eight years. John confirmed to the Mirror in 2016, "Out of respect for my mother’s privacy, I have always shied away from speaking publicly about our relationship. However, I can say that we are now back in touch and have been so since my mother’s 90th birthday." Oddly enough, Farebrother hired an Elton John impersonator for her 90th birthday party.

The estrangement was due, at least in part, to Farebrother remaining in touch with two old friends of John's, John Reid and Bob Halley, after he cut ties with them himself. Farebrother spoke to the Daily Mail about the estrangement in 2015 and called it "stupid" and "petty."

In regards to the situation with Reid — who is portrayed as a villain in Rocketman — and Halley, she said, "I told [John]: 'I'm not about to do that and drop them. Bob is like a son to me. He has always been marvelous to me and he lives nearby and keeps an eye on me.'" She said John then told her he hated her and hung up the phone.

Then, not mincing words, she added, "He told me I thought more of Bob Halley than I did of my own son. And to that I said to him, 'And you think more of that f*cking thing you married than your own mother.'" (She was referring to John's husband, David Furnish.)

There's a lot more from Farebrother in the interview, too, including her saying that Furnish and John were supposedly mad at her for not wearing a hat to their civil ceremony in 2005. She even said she'd like to "give Furnish a punch right on the bloody earhole!" As for another point of contention, she said her son didn't come visit her husband when he was dying in the hospital.

Clearly, their relationship was complicated, and as far as what really went down, only Farebrother and John know for sure. Farebrother was very outspoken in her interview, but when the singer confirmed that they were on good terms again in 2016, he noted that he wouldn't be commenting further.

Now, though, Rocketman could serve as his commentary, since John was directly involved in the film as an executive producer. Furnish also served as a producer. The movie does not paint Farebrother in a positive light. She's shown as selfish, tells John that he's "choosing" to be alone by coming out as gay, and says that it's "disappointing" being his mother.

Howard spoke about playing Farebrother with The Hollywood Reporter and said, "I wanted to be able to take on a fun thing of 'Oh, I'm his mama and I'm so proud of him.' But the reality was that they had a really dysfunctional, toxic relationship and that wasn't the dynamic between them, of being supportive. It was so fun to be a part of this, but it’s truly so sad. Just the relationship between them and the lack of love and the void that Elton felt in his life starting from a really young age."

In the real world, and long after the events of the movie, they did end up reconciling, as John confirmed, but reportedly, Farebrother did give a metaphorical punch in the earhole in her will. Not that John needed the money, but according to The Sun, she left her son two urns when she died, but left over £500K to Halley.

More like this
Everything You Need To Know About ‘Black Panther: Wakanda Forever’
By Bustle Editors
Snoop Dogg & Michelle Pfeiffer Lead Moving Tributes To Coolio
By El Hunt
Christian Bale Sang With Taylor Swift & His Daughter Can't Believe It
By Radhika Menon
Harry Styles’ Red Carpet Looks Have One Thing In Common
By El Hunt
Get Even More From Bustle — Sign Up For The Newsletter