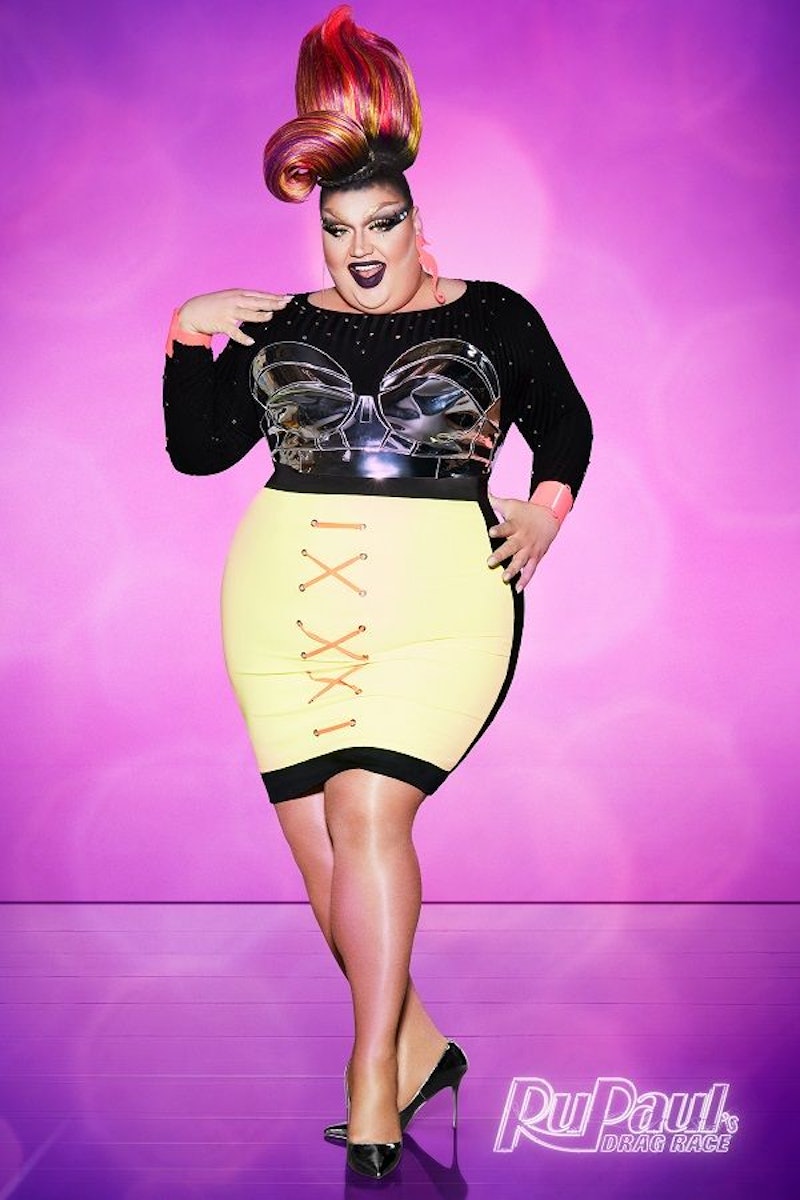 Season 10 of RuPaul’s Drag Race is filled with so many new queens. However, there is one face that is familiar. Eureka O’Hara actually appeared last season, but ended up having to go home for medical reasons. So what happened to Eureka on Drag Race Season 9 to send her packing? She suffered a major injury, which has thankfully since healed.

For Eureka, her first appearance on Drag Race was a bumpy one. In Week 2 during a cheerleader-based challenge she attempted to do a split and it did not end well. After hearing a pop, she later discovered she had torn her ACL. While she would stay in the competition for a few episodes longer, ultimately Ru decided to send her home in Week 5. However, Ru did so with the intention for her to heal up, and return during Season 10. Apart from her injury though, she did not make too much of a splash. Although she didn’t finish in the bottom in the five episodes she was present for in Season 9, she didn’t win any challenges either.

For Eureka, it was a frustrating experience. She obviously did not want to go home. Ultimately, it was Ru’s decision in conjunction with doctor’s orders that kept her from competing, according to an interview she did with TV Line. “Honestly, it was the doctor. It wasn’t up to us. It would have been a liability on us all if we didn’t follow the doctor’s order, and his recommendation was for me to have immediate ACL reconstruction,” she said. “My ACL was completely detached in my left knee, so I needed to have immediate surgery.”

It was always her plan to return, though. Eureka said as much in an interview with Entertainment Weekly following the surgery. “I’m coming to the closing end of seeing doctors after knee surgery,” she said. “I’m doing really well, and as long as the powers that be allow it, I’m definitely going to be back.”

And, now she is back. In an interview with VH1 done before Season 10 of Drag Race began to air, Eureka talked about how things have changed over the last year of her recovery. She revealed that her drag has evolved. “I’m so excited to be back, it feels amazing. I feel like it’s the right time. I’ve been crazier than I’ve ever been in my entire life getting ready for this. I’m extremely, extremely excited to be here,” she said. “Before I was doing drag how I was taught. Now, with the validation of my career, blowing up, the fans, the amazing people in my life, I’ve decided that I’ve started doing drag like I want to.”

But, while her physical injury may have finally healed through surgery, time, and therapy, the mental toll may still remain. After all, after such a traumatic event, it is likely to leave a mental scar as well as a physical one, and it could affect her confidence. Week 2 of Drag Race Season 10 marks the anniversary of the week her major knee injury happened. And, judging from the sneak preview of Week 2’s episode, Eureka has her injury on her mind. When practicing some kind of dance, coach Alyssa Edwards asks if Eureka is OK. Eureka responds, “It’s the PTSD I think,” clearly still unsure of her ability to perform the way she wants to.

So, while Eureka has overcome the physical part of the injury, it remains to be seen whether she will be able to overcome the mental burden. Judging from her confidence before the season began, it certainly seems like she has it within her to leap over any obstacle. In the words of Alyssa Edwards, Eureka is “back, back, back again”, but only Episode 2 can reveal whether she will stick, stick, stick, around.

More like this
'Bachelor' Star Cassie Randolph’s Sister Is In The 'Yellowstone' Spinoff '1923'
By Grace Wehniainen
Everything To Know About 'RHONY' Season 14
By Jake Viswanath, Alyssa Lapid and Brad Witter
RHOP’s Robyn Dixon Explained Why Juan Paid For Another Woman's Hotel Room
By Brad Witter
Kaitlyn Bristowe Said Chris Harrison Ignored Her After Her 'Bachelorette' Hosting Gig
By Grace Wehniainen
Get Even More From Bustle — Sign Up For The Newsletter
From hair trends to relationship advice, our daily newsletter has everything you need to sound like a person who’s on TikTok, even if you aren’t.