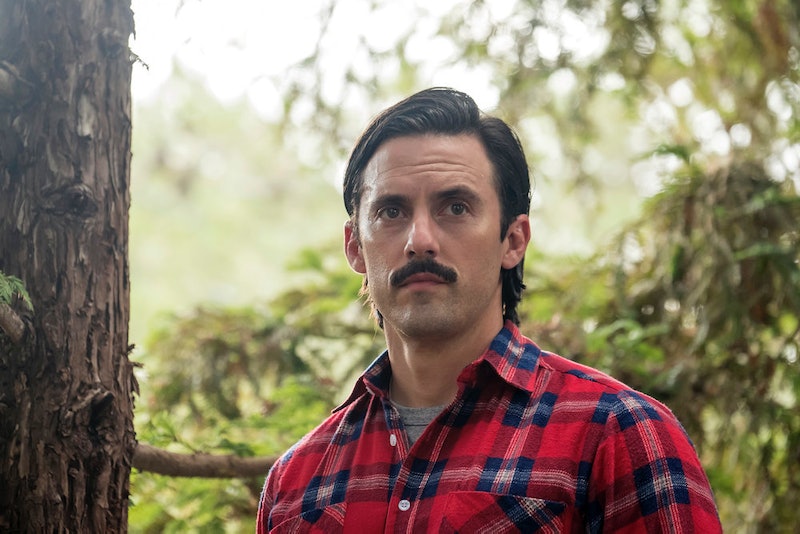 The Pearson family just got bigger, and not in the way you would think (spoilers ahead) — on the Oct. 24 episode of This Is Us, viewers learned that Jack Pearson has a brother named Nicky — or, maybe, had a brother. It all makes sense that he'd have a sibling, when you think about it, because Jack always put a strong emphasis on Kevin and Randall and how they needed to get along with each other. But what happened to Jack’s brother on This Is Us?

First, let's backtrack. It’s the late 1980s and Randall and Kevin are still at each other's throats. Well, that’s not entirely true — Kevin still hates Randall, and Jack takes it upon himself to take the boys camping for a night to show them the true meaning of teamwork and brotherhood, or something. Really, he wants to get to the matter of why Randall and Kevin don’t get along (spoiler alert: it’s because Kevin is a little jerk to his brother). This is something that probably any father would do — Jack had a poor family life growing up, so he wants his children to get along and be there for each other as they grow up. Viewers already know that Jack had an alcoholic father, and in a flashback, a 10-year-old-ish Jack and his dad are in the car on the way to go fishing. But, as Jack’s dad says, he gets “thirsty” along the way and stops into bar, telling Jack to wait in the car. And Jack waits. And waits. And waits. And Jack says to himself, “He’s coming back. He’s coming back. He’s coming back.”

It’s obvious the fishing trip isn’t going to happen, but then there’s a big reveal — there’s a bespectacled boy, younger than Jack, in the backseat. Jack Pearson has a younger brother, and his name is Nicky. Little Jack assures little Nicky that of course their deadbeat, alcoholic father is coming back. It’s the earliest that we as viewers see Jack’s protective spirit in action. Later, an adult Jack gazes at a picture of himself and Nicky in fatigues, the name “Pearson” embroidered across their army uniforms.

That hint in this episode is that Nicky was killed in the Vietnam War, and even though I know that This Is Us is full of misdirection, this is probably a good bet — though it’s probably not as simple as getting killed in combat. Jack’s father was an abusive alcoholic, so that could be fodder enough for Jack to hate his father, but what if Jack hates his father because his father, either directly or indirectly, was responsible for Nicky dying? In the Season 1 finale, “Moonshadow,” Jack is 28, freshly home from Vietnam, and righteously, viciously angry at his dad. The anger is thick, and Nicky is nowhere in the picture. Nothing is mentioned of Nicky, which means he has already died or left, and Jack’s dad keeps talking about how his son hasn’t made anything of himself. How supportive!

If Jack’s dad pressured Jack to “be something,” the case can be made that he also pressured Nicky to achieve. The draft was instated in the Vietnam War, but maybe Nicky, driven to impress their father, joined the army and Jack fell in line behind him to keep an eye out. Nicky could have been killed in action, and Jack returned home alone without his brother and angrier at his family than he’s ever been.

What happened to Jack’s brother on This Is Us is sure to be revealed (eventually), but from what we know already, it’s going to be complicated and it only further shows how much more we have to learn about Jack.