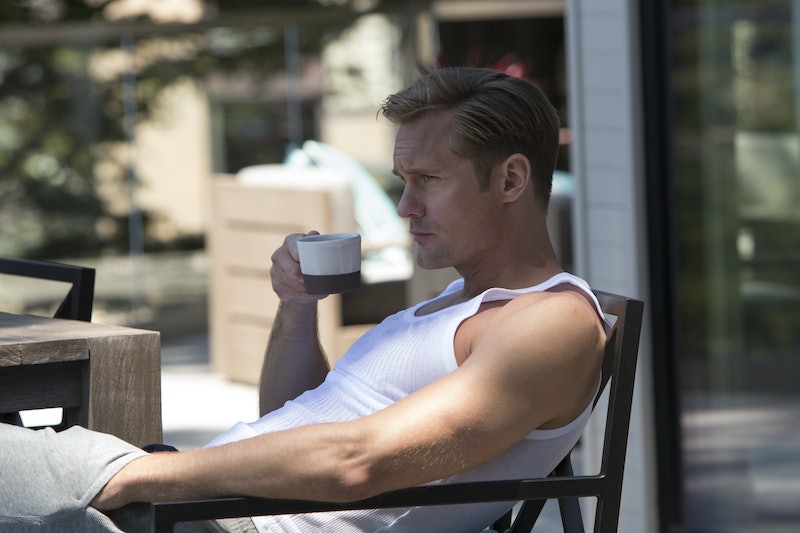 Spoilers ahead for Season 2, Episode 4 of Big Little Lies. Perry's brother Raymond has been mentioned more than a few times now on Big Little Lies, and the circumstances surrounding his death have grown increasingly suspicious. Previously, we'd only heard about him vaguely: Perry mentioned him in a flashback to when he and Celeste first started dating, while Mary Louise revealed that he'd died in an "accident" during a conversation with Celeste, as well as showed pictures of the young boy to Jane, saying he looked a lot like Ziggy. But in the June 30 episode, we learn a little more about what happened to Raymond — and it makes an increasingly popular fan theory seem even more likely.

During a tense exchange with Mary Louise on Sunday night, Celeste brought up Raymond once again: "You were alone, after the accident. Your husband left. Perry told me," she said. Mary Louise was taken aback for a moment before responding: "Yes, he blamed me, and he left. And I deserved the blame — to be left. He started a new life, he got a new family, he became a devoted father — so I'm told. It's good. People can move on after tragedy — just not together, sometimes."

Not all viewers are buying these mysterious mentions of an "accident." Having seen what Perry's capable of with Celeste, some have speculated that Perry could have killed his brother himself. PopSugar suggests that a clue could be in an earlier moment from that same Perry flashback, when he commented that he would have Celeste "all to himself" because she didn't have any family. Given his extreme possessiveness, is it possible that Perry killed his brother to have Mary Louise all to himself? Or that he simply let his temper get out of control?

Now that we know Perry's father left right after the accident, it's clear how intense the relationship between Perry and Mary Louise must have been growing up. One Redditor suggests that, if Perry "killed his brother maybe 'accidentally,'" then "Mary Louise has been protecting him this whole time." In other words, this isn't the first time she's denied and covered up Perry's violent behavior.

Other Redditors suggest that Mary Louise herself killed Raymond, and that Perry's violence later in life was in response to that trauma. "I think Perry got his power/abuse problems from Mary Louise," sognidistelle writes. "I think we'll be shown that in the final episodes that she killed Perry's brother in a fit of rage or something." If true, Mary Louise is a lot more dangerous than we know — and there's even more reason to keep the twins out of her grasp.

Whatever the "accident" ends up being, the Wright family is a touch too sinister for there not to be more to the story. Whether Mary Louise kept a secret of Perry's or he kept a secret of hers, the Monterey Five has shown how binding that kind of secret can be.

Right now, Mary Louise is hell-bent on getting to the bottom of Perry's death, but Celeste is just as determined to keep her twins in her custody. If that requires digging through Mary Louise's past to find out what exactly happened to Raymond — well, so be it.

More like this
Everything To Know About 'And Just Like That...' Season 2
By Jack Irvin and Grace Wehniainen
These Brooke Davis Quotes From 'One Tree Hill' Will Never Get Old
By Sabienna Bowman and Jack Irvin
'The Last Of Us' Episode Schedule Competes With The Super Bowl & Oscars
By Brad Witter
Grammys Host Trevor Noah Made Adele's Dream Of Meeting The Rock Come True
By Brad Witter
Get Even More From Bustle — Sign Up For The Newsletter
From hair trends to relationship advice, our daily newsletter has everything you need to sound like a person who’s on TikTok, even if you aren’t.