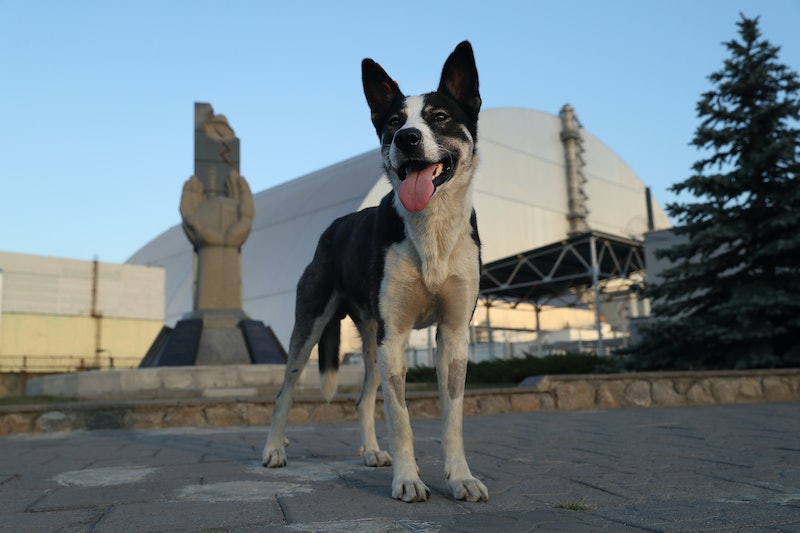 For the past month, Sky Atlantic has been airing a series that has caused much discussion. Chernobyl is the story of what happened after the 1986 nuclear reactor explosion, including the deaths, cover-ups, and myriad consequences. But the fourth episode (which aired on May 28) was particularly distressing to watch. In it, a team of three Soviet soldiers was seen shooting the dogs that had been abandoned in Pripyat, Ukraine. But what really happened to the dogs of Chernobyl?

Unfortunately, it wasn't a happy ending for most pets. As Business Insider reports, residents of the area close to the nuclear power plant were told to evacuate around 36 hours after the incident. They were given 50 minutes to pack their belongings and board one of the many buses waiting on the roads. No pets were allowed, meaning that people had to abandon their beloved dogs, cats, and other animals.

A book entitled Chernobyl Prayer: A Chronicle of the Future recounts eyewitness testimony from the day of the evacuation. "Cats looking into people's eyes, their dogs howling, trying to get on the buses. Mongrels, Alsatians. The soldiers were pushing them out again, kicking them. They ran after the buses for ages," one survivor remembered. A scene similar to this description was witnessed in the Sky Atlantic series.

But what came next was even more harrowing. As the Guardian explains, Soviet Union squads were told to shoot any stray animals to prevent the spread of radiation. In the Chernobyl series, even puppies weren't spared. The Chernobyl Prayer book appears to confirm this fact, with one "liquidator" mentioning "a bitch lying in the middle of the room with her puppies." The account continues:

"Dogs were running about near their houses. Guarding them, waiting for people to come back. They were excited to see us, came running to a human voice. They welcomed us. We shot them in the houses, the barns, the vegetable plots. Then we dragged them out and loaded them on to the tipper trucks. Not pleasant, of course. They couldn't understand why we were killing them."

However, it was impossible to kill every abandoned pet, leaving many to live and reproduce. In February 2018, the Guardian reported that there were around 300 stray dogs still living in the Chernobyl exclusion zone. Many carry "increased levels of radiation in their fur," according to the paper, and have been forced to cope with freezing temperatures and little food. These factors combined mean that most of these dogs die before the age of six.

For the past few years, a non-profit organisation has been doing all it can to help. Clean Futures Fund visits Chernobyl to spay, neuter, and vaccinate stray dogs, protecting them from rabies and ensuring that fewer puppies are born. (If you want to donate to the cause, you can do so.)

Some are also used for scientific research, notes the Daily Mail. Fitted with collars that can sense radiation and receive GPS signals, these dogs — which will go where no human is allowed — are helping experts map radiation levels.

A few of the dogs living in the exclusion zone today may have a brighter future. As Buzzfeed reports, Chernobyl puppies tend not to be radioactive, meaning they can be adopted by people living in other countries. Allowing a dog to leave the area was illegal before 2018 but harmless animals can now be taken to safer and more comfortable homes by specialist charities.

Still, the tale of their ancestors is a reminder that human mistakes cost more than just human lives.