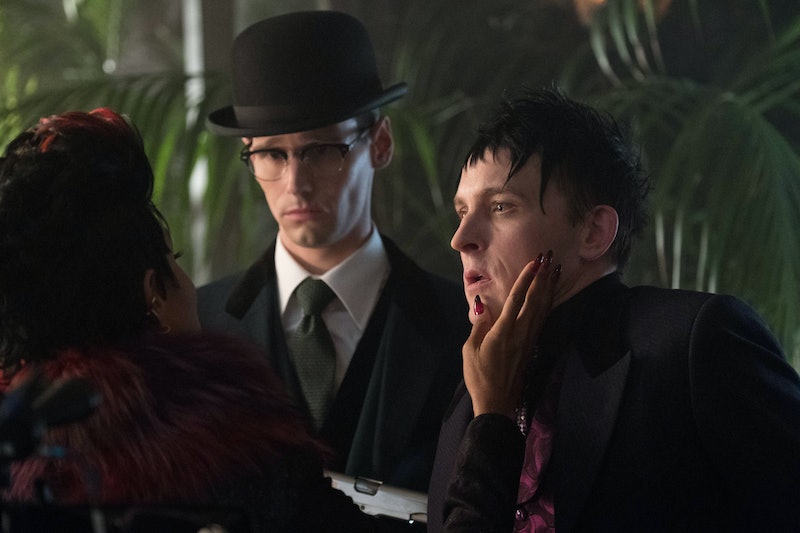 After a few slow episodes, Gotham Season 4 is really taking off, with an Oct. 5 episode that pressed fast-forward on several major plotlines. Ra's al Ghul's backstory was explained (it's a story that began literally thousands of years ago); Jim Gordon went on a little 007-esque tropical jaunt (and hooked up with Carmine Falcone's ambitious mobster daughter); the pseudo-Sirens are after an ancient knife; and Bruce practiced his acting skills (probably difficult to make a 180-degree turn from dour teen to obnoxious Richie Rich clone in a single public appearance, but he tried his heart out). But for now, let's focus on the episode's biggest moment: the Riddler, Edward Nygma, is no longer frozen on Gotham, but however, he was facing one major change: the guy is no longer the super genius that made him into a criminal mastermind. Interestingly, he does still seem capable of the mood swings and intense rage that made him kill his first girlfriend and to carry out such passionate, complicated revenge on his former best friend, Penguin.

The circumstances of Riddler's escape from Penguin's clutches are, frankly, absurd. After the surprisingly emotional arc wherein Victor Fries tries and fails to create a method of unfreezing people so he can save his wife from dying of terminal illness, Ed is defrosted manually via blowtorch by a former classmate turned obsessive who's basically a hyperactive version of Ed in Season 1: a nice but frighteningly intense woman with a crush. But while she's able to get Ed walking, talking, and moving again, she can't solve his biggest problem: he's lost his mind. More specifically, he's lost his superior intellect and his natural ability to solve riddles, so even the most basic punchlines (we're talking riddles that end with "...a newspaper") are lost on him.

This particular affliction has never plagued the Riddler in the comics, but it's common to see the trope of a superhero or villain's powers change temporarily to signify a shift in their character. The question is, what's changing about Riddler that would necessitate a loss of his abilities? He was losing his mental faculties already, in a way, because he's frequently unable to distinguish reality and unreality, but he's also adrift, missing his purpose. His zest and zeal for revenge over losing Isabella has always been a thin plot device, because the two characters barely got the chance to bond before Penguin's jealousy cut the relationship short.

It was inevitable as soon as Riddler appeared in his non-frozen form in the season's promotional poster that the character would be back in his talking and walking form; but as soon as Cory Michael Smith returned, it felt like his performance and his character stood in for everything amazing about Gotham that came flooding back in this episode. Riddler is once again on his own, with his would-be sidekick getting sidelined with a shot from Victor Zsasz, presumably a fatal one, and a reunion with his former BFF and boss, the Penguin, who's still furious that someone stole and reanimated the centerpiece to the Iceberg Lounge while he's currently attempting to tout his highly developed villainy skills.

But while it's great to see both Pengiun and Riddle back on Gotham, as they should be, they didn't yet get the chance to share any scenes in this episodes. Coming up in future episodes, even the newly dim, still-angry Ed should get a chance to confront Oswald, and maybe the two will even reunite — no time was more productive for these two than their brief sojourn as legitimate politicians running Gotham City for real. But whatever's next for Riddler on Gotham, he'll have to make due without his smarts or a sidekick.