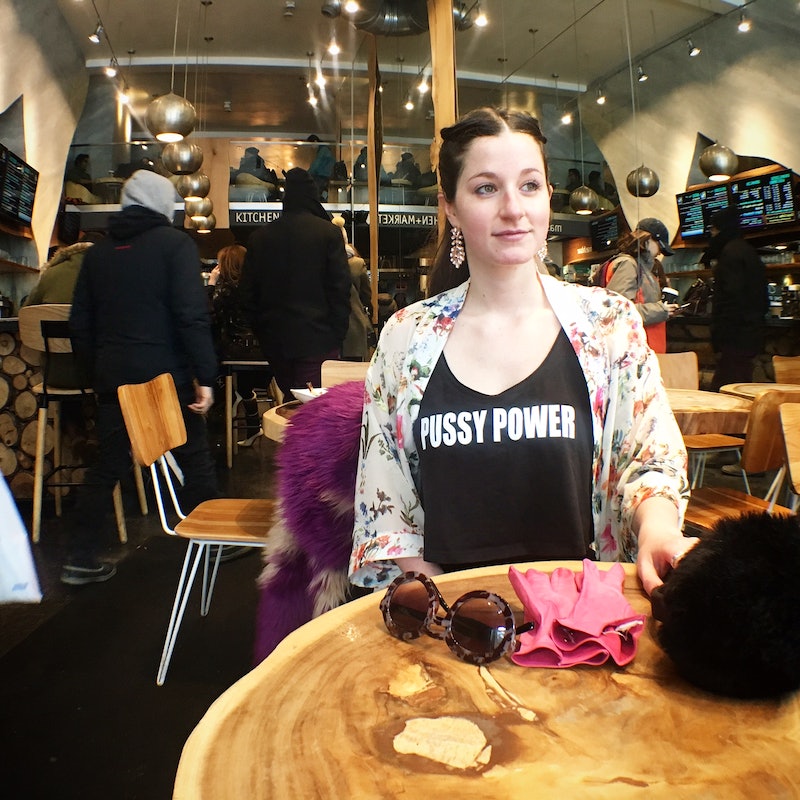 I love shouting, “Pussy Power!” out loud, for all to hear. We should be empowered enough to use the word pussy without fear, right? I was given the shirt after I curated a Pussy Power sex toy box with Unbound, just in time for the Women’s March. Obviously, I wore it to the women’s march and danced around the streets of New York, loving my life. It was so empowering in that context.

But then I didn’t wear it again. I’m not sure exactly why, but I guess a shirt that says “Pussy” across the front doesn’t really go with any of my outfits. Or, perhaps I was just scared. Maybe I didn’t want people to judge me. The word also now holds a special brand of electricity due to our President’s cavalier use of the word, while describing groping women without their consent. He’s clearly a charmer. The point is, pussy is a charged word right now.

I was vexed by the idea of brandishing a word that is considered uncouth by so many on my chest. Public scrutiny has a way of deterring you from doing anything that might ignite judgement or, on a darker note, harassment.

Women are always judged for what we wear. If we wear anything sexy or revealing, we’re slut-shamed. We’re told we’re "asking for it." To society, wearing a "Pussy Power" shirt is like asking to be aggressively hit on by men on the street. That’s what we've been told, anyway.

I’m much more embarrassed for letting my misguided fears of judgement dissuade me from wearing whatever the hell I want than wearing my "Pussy Power" shirt in public.

Well, with all due respect, eff society. I’m much more embarrassed for letting my misguided fears of judgement dissuade me from wearing whatever the hell I want than wearing my "Pussy Power" shirt in public.

So, I wore it all over NYC on a normal day, no women’s march afoot, and this is what happened.

Everything Was Pretty OK, To Start

I went to grab coffee at the local bodega, a divey spot next to my apartment. The guy behind the counter made a conscious effort not to look at my shirt, but this occurrence could easily have been all in my head. No one said anything about it to me. It was FREEZING so I had my three-toned faux fur coat buttoned up to my ears. Walking around didn’t leave much chance for pussy power exposure for the general public.

I had lunch with a friend in Union Square. While waiting for him, a guy told me he liked my shirt. He was around my age. He didn’t say anything else, just that he liked my shirt before he made his way out of the restaurant.

I suppose living in a wild place like NYC, full of people screaming, “Showtime!” on the subway before breaking into acrobatic dance moves, and panhandlers on street corners asking for change, seeing a girl in her 20s, wearing a "Pussy Power" shirt is the least of the weird sh*t one will encounter on any given day.

Of Course, There Always Has To Be One Annoying Jerk

After lunch, I spent the afternoon working in my boyfriend’s coworking space in the Flatiron District. While he was in a meeting, I worked on my laptop in the communal kitchen. I overheard a guy asking a girl if she knew of any cool subscription boxes that Millennial women use, for a project he was working on. I chimed in and told him how great Unbound was. He asked me what Unbound was, and I told him it is a sex toy subscription box, “Um. I don't’ think that’s very relevant to people," he said.

“I think it’s extremely relevant," I said. "People buy sex toys and Unbound is one of the fastest growing subscription boxes on the market.” I really was trying to be helpful.

He then took a solid 10-second look at my shirt and said, “Well, I guess it would be relevant to you.” As if I was the only woman who cares about female pleasure because I’m wearing a shirt that says, “Pussy Power.” Right, dude. The female orgasm is definitely NOT relevant to Millennial women. Totes.

I just got up and walked away. Some men never cease to amaze me with their complete lack of understanding of reality.

A Kickass Woman Got It

After I had moved to the other side of the room, I was met with a much happier experience. A really badass lady with a heavy New York accent and chic plaid pants complimented my shirt and asked if I went to the march. We had a short, but lovely conversation. She went all the way to DC for the march.

"It was wonderful having solidarity with a woman so much older than me, simply because we understood the importance of the reclamation of the word pussy."

She said it was one of the best says of her life. It was wonderful having solidarity with a woman so much older than me, simply because we understood the importance of the reclamation of the word pussy.

It turns out, I had nothing to fear by wearing this shirt. The one ignorant guy aside, wearing my "Pussy Power" shirt was incredibly uplifting and emancipating. This work deserves to be unshackled and worn with pride. It’s our word, and we shouldn’t be afraid to use it.

I’m sure I would have had a different experience had I not been in New York, the epicenter of the world. Perhaps next time I’ll wear it around my hometown in the Midwest and see what happens. Stay tuned.