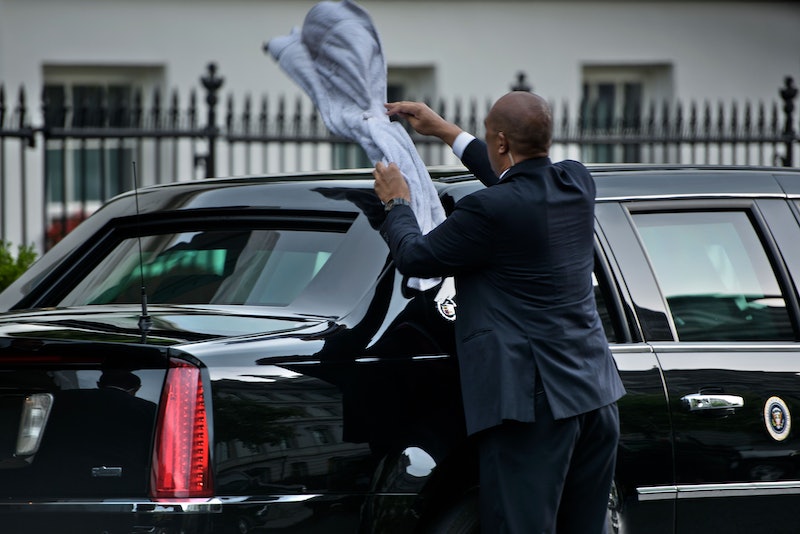 Alright, no obvious puns here about rain on Donald Trump's parade. But, it probably won't be all sun and smiles for today's inauguration ceremonies. Weather forecasts predict a high probability of rain — from a 60 to 80 percent chance of showers during the actual swearing-in ceremony of President-elect Trump. Given past inaugural precedents, bad weather like rain at the inauguration will not alter any of the planned proceedings. But there are some pertinent facts to keep in mind, for both attendees and Trump himself.

Live footage airing Friday morning shows many of those come to observe this historic day are prepared. Ponchos and a variety of plastic clothes covers are a fairly common sight. That's probably in part due to the prohibition on umbrellas that had been in place up until early yesterday morning. Presumably because of their potential to cause harm, the National Mall National Park Service had initially banned all umbrellas. But after weather forecasts all but guaranteed some kind of precipitation, they've now updated their restriction to allow small, collapsible umbrellas. This might turn out to be a great sales day for anyone in the purse-size umbrella business.

Weather historically has not been friendly to inaugurations. The coldest on record came during President Ronald Reagan's second swearing-in ceremony. A forecast of -20 degrees with wind chill forced the proceeding indoors. The unluckiest (or most foolish, depending on how you read it) president in terms of Inauguration Day weather has to be William Henry Harrison. After giving a long-winded outdoor speech (lasting somewhere between two and three hours), Harrison proceeded to ride his horse through the parade in full, despite cold temperatures, and refused to wear even a scarf or hat.

Historians don't all agree that it was Harrison's inauguration that caused the cold three weeks later — a cold that turned to a fatal case of pneumonia. But it seems awfully likely.

In Trump's case, the Bible he has chosen to use for his swearing-in could have to take a rain check (had to have at least one pun). He's chosen the same Bible that President Abraham Lincoln used for his inauguration, only the second president to do so. (President Obama is the other.)

Because of its historic value, the Lincoln Bible lives at the Library of Congress. And naturally, the conservationists there take the condition of their property very seriously. A special box has been made for the Lincoln Bible, and if rain does come into play, an appointed person will be on "standby" to save the relic from any harm. In that case, Trump's swearing-in won't be too hampered. He's bringing another Bible, one given to him as a child.

Rain may put a damper on the mood, but it won't have much impact on the scheduled proceedings.