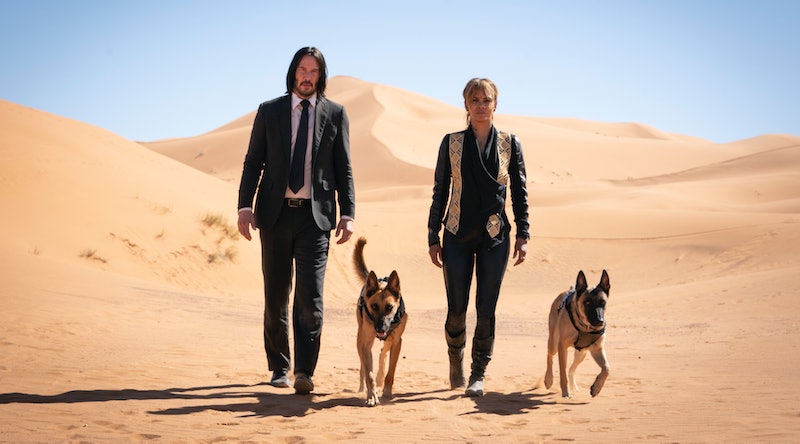 What to call fans of hyperbolic assassin's tale John Wick. Wickheads? Wickans? Wickermen? Whatever the preferred term, they're out there in droves and have been since the moment Sad Keanu morphed into Extremely Mad Keanu in the first John Wick film in 2014, going from mopey to determinately murderous in the span of two minutes and remaining so for the full runtime of not one, but two films. (The second premiered in 2017.) If you missed out you need to know what happens in John Wick 1 and 2, this quick guide should get you all caught up for the mayhem of Parabellum before it hits theaters on May 17.

While the first Wick set up the slenderest of skeletons on which to drape lovingly choreographed ultraviolence — a legendary hitman out of the game gets yanked back in when a smug Russian mob son kills the dog his wife left him — the second movie elaborates on the assassins' underworld lightly established in the beginning. The Continental, the Sommelier, the High Table, Markers... as John tries to meet his obligation, the lore and world around him's built up and expanded, culminating in a full-on worldwide hit. One man against the Russian mob becomes one man (and his adoring dog) against the entire world as the film ends with a global hit announced on Wick, who begins running. And that's exactly where Parabellum (Latin for "prepare for war", as Keanu himself explained to Coming Soon) picks up — with Round 2 of Wick fighting off every assassin gunning for the immense bounty out on him. Here's how we got there: