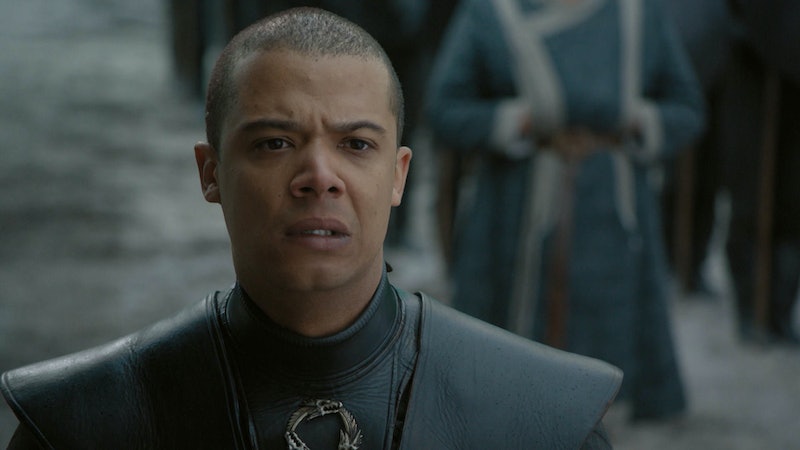 He's had the love of his life and most of his army ripped away from him, but Grey Worm still has his life going into the final episode of Game Of Thrones, which is more than most of the series' character's can say for themselves. While fans will learn of Grey Worm's ultimate fate in the Game of Thrones season finale, readers of the A Song Of Ice And Fire series that GoT is based on may have to wait a long time to learn what happens to the Unsullied soldier. And like many of the characters, his show fate may not line up with what happens to Grey Worm in the Song Of Ice And Fire books.

In the show, Grey Worm has proven to be one of Daenerys' most invaluable allies. He's a powerful warrior in his own right, but he also serves as a mouthpiece for the Unsullied, the army of slaves that Daenerys freed from Slaver's Bay and encouraged to fight for her as free men, and is her de facto military strategist. As far as true believers go, there is perhaps no believer truer in Daenerys' current company than Grey Worm — primarily because all of her other true believers are either dead or have realized she wasn't kidding about that whole "Fire and Blood" thing.

In the books, however, while Grey Worm is a trusted member of Dany's forces, he still has a long way to go before he becomes the figurehead of Dany's military forces — if he lives long enough in the books to attain that power in the first place.

While Grey Worm has become a crucial part of Dany's entourage in the shows, his role in the Targaryen's inner circle is much smaller in the books — at least for now. He still serves as the commander of the Unsullied, but those around him do most of the talking when it comes to military strategy. In the books, Dany's posse still has Barristan Selmy, who in the show dies at the hands of the Sons of the Harpy, and Daario, who in the show is still in Essos trying to govern Mereen while Dany is off burning Westeros to the ground.

In A Dance With Dragons, Selmy makes Grey Worm a member of the ruling council of Mereen, allowing him to use his military knowledge to try and keep the city of Mereen under control while Dany is off in the Dothraki Sea. However, the upcoming ASOIAF book The Winds Of Winter could introduce a new player in Mereen that could shake things up and possibly result in Grey Worm becoming a more vital member of Dany's inner circle.

Tyrion and Daenerys haven't met yet in the books, but their connection is seemingly inevitable at this point. If the Lannister is able to earn favor with the ruling council of Mereen and the Mother of Dragons in the books the same way he does in the show, he could take an interest in working with Grey Worm thanks to his love of "cripples, bastards, and broken things." There's still time for the books to take Grey Worm in a much different direction than the show, but it seems likely that Grey Worm's role in Dany's life isn't going to be much different than what fans saw on Game of Thrones.