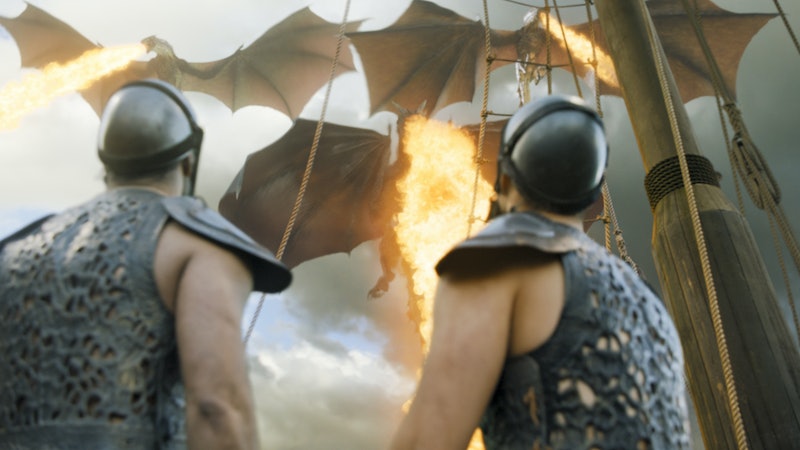 Dragons are a pretty big deal in Game Of Thrones. While Daenerys has some popular policies, a significant pillar of her political platform is "Look at these dragons I have," and her three fiery boys have carried her across seven seasons of Game of Thrones. However Game of Thrones is slowly but surely killing off her dragons one-by-one, forcing fans to say farewell all but one of her winged superweapons so far. But the dragons in the Game of Thrones books endure different fates.

Arrax, Morghul, Seasmoke, Stormcloud, Syrax, Vermax, Vhagar, and Shrykos are all dragons in the books. And at the end of A Dance With Dragons, Dany's dragons are alive, but in the Song Of Ice And Fire it's pretty clear that if there are other dragons roaming around Westeros, no one knows where to find them. The last living dragons in Westeros died out about a century and a half prior to the birth of Dany's trio — but could there be more dragons hiding somewhere in Westeros?

The history of Dragons in Westeros, like the history of many things in Westeros, is a long and complicated thing that involves a lot of Targaryens. This royal family of Westeros has a long history of using dragons as tools of war, the effectiveness of such was put on display when Drogon attacked the Lannister forces in Season 7 of Game of Thrones.

In the show, it doesn't seem like there are going to be more dragons showing up. The series only ever dealt with Viserion (dead in Winterfell), Rhaegal (dead in Blackwater Bay), and Drogon (alive with Dany in Kings Landing). While there are no known dragon eggs left in the world, if Dany can happen upon three eggs during her travels in Essos, it's entirely possible that someone else could find dragon eggs elsewhere. In the books, Euron Greyjoy even claims that he had a dragon egg before he threw it into the ocean which sounds exactly like what someone would say if they never had a dragon egg in the first place.

Essos is, after all, a massive continent and there are vast stretches of it world that Game of Thrones hasn't even attempted to depict. Some even believe that there are dragon eggs in the Winterfell crypts, which would've been real handy a couple episodes ago.

There may not be any other fire dragons, but the Song of Ice and Fire books include myths of Sea Dragons and Ice Dragons. While fans haven't seen any proof of either of those in the series, if the Night King was able to turn Viserion into an Ice Dragon, someone else could maybe turn Rhaegal into a Sea Dragon. Maybe, right? With only two episodes to go an no concrete leads on how Daenerys could replenish her forces, it looks like fans will have to settle for the fact that three dragons was as many as we were ever going to get on Game of Thrones and hope that the books will satisfy the thirst for more dragon-based fantasy tales.

This article was originally published on May 7, 2019