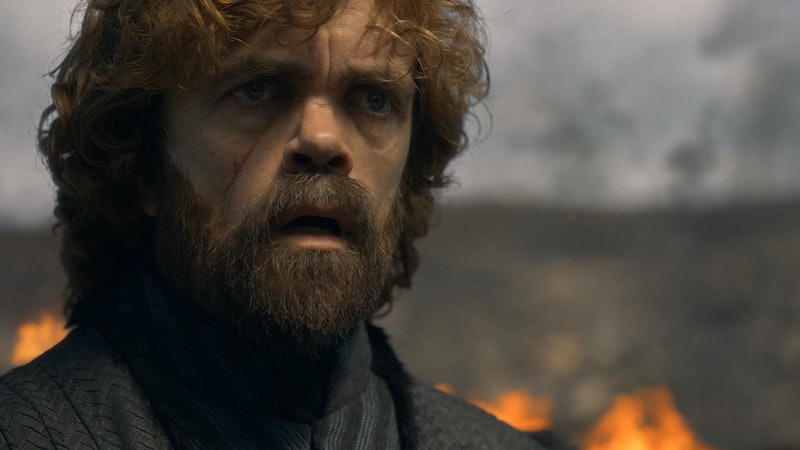 Spoilers ahead for Game Of Thrones Season 8. The time has officially come to say farewell to Game Of Thrones and no surprise, HBO isn't interested in giving too much away before it airs the show's final episode. The latest photos from Game Of Thrones Season 8 Episode 6 are vague even for this show. In fact, the network only shared two shots from the episode, one being of Daenerys Targeryen looking out at the decimated King's Landing, which appeared in the teaser trailer for the finale. The other will leave you trying to guess what happens to Tyrion in series finale. Though, it's worth assuming that he'll play a major role in this last episode.

The image is of a sad Tyrion (Peter Dinklage) walking through the ruins of what were once King's Landing. While Tyrion never loved living there, he certainly didn't want to see this happen. In fact, he fought with Dany to spare the innocent and force Cersei to abandon her plan to fight Khaleesi and her army. But when the bells rang signaling a surrender, Daenerys ignored it and had Drogon go all dracarys on everyone.

While Tyrion is still wearing the hand of queen pin in this image, it's hard to believe he's still interested in bending the knee to a Mad Queen who doesn't care about the people. It's why this photo could hint that Tyrion will betray his queen just as Varys had advised before his own untimely death.

Tyrion may put Dany's murder into motion by looking to Jon Snow or Arya to kill the Queen. Both are warriors that have now seen firsthand the destruction she's capable of. But it's possible he won't have time to set up this plot. Dany's already warned him that if he failed her again, she would kill him. Trying to set up a coup would definitely qualify as failure to advise, as would him setting his brother Jaime free so that he could get to King's Landing to be with Cersei. He chose his family over his queen, which is a big no-no in Dany's book.

There are past theories that Tyrion will be on trial for treason based on earlier leaks, but that feels farfetched knowing how little time the show has left. But, who knows, Game Of Thrones' pacing this season has made anything possible, like Arya getting to King's Landing on horseback in the matter of an episode. Also, whether you agree with how Dany became the Mad Queen or not — Twitter certainly didn't — it seems she's past the point of reason. Why would she use the judicial system when she could just use a dragon instead?

More likely, the question fans should be asking is will Daenerys kill Tyrion in the finale? It's hard to believe she won't try, but she might be too busy defending herself from Arya and Jon Snow, to worry about Tyrion. Other fans might hope that Tyrion really is a Targaryen and can use Dany's dragon against her.

Based on what's already happened in Season 8 it's really anyone's guess on what could happen to Tyrion and the rest of the gang. However, we can assume that whatever happens in the finale, Game Of Thrones' mentions are going to be blowing up on Sunday night.