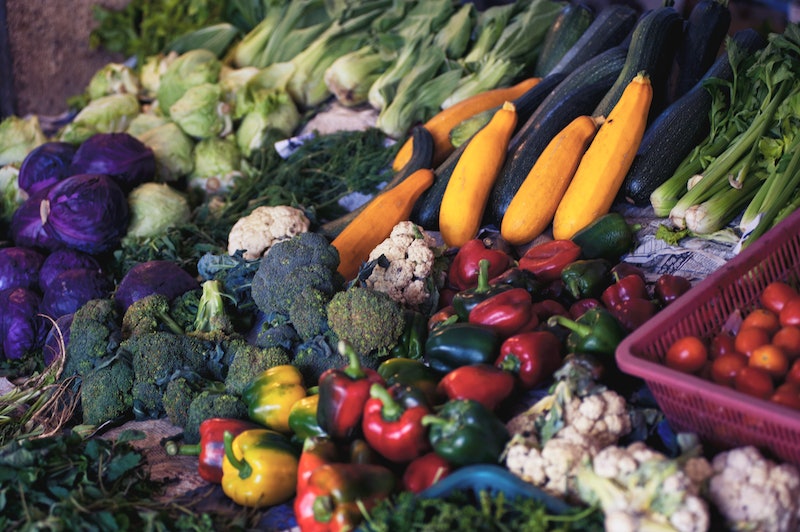 The internet is abound with promises of what will happen when you try a plant-based diet. Of course, some rumors are more true than others, which is why knowing the actual science of what happens to your body when you stop eating meat, dairy, and eggs is so important. Having gone vegan myself two years ago now — and having experienced numerous health and emotional benefits as a result — I was wondering which changes have actually been backed up by science, mostly so that I can tell friends and family members giving a vegan diet a try what they might be able to expect.

I spoke with Dr. Michael Klaper, an internationally recognized authority on the links between diet and health, as well as Dr. Thomas M. Campbell, medical director of the T. Colin Campbell Center for Nutrition Studies and clinical director of the University of Rochester Program for Nutrition in Medicine, to find out more. Of course, if you're thinking about trying a vegan diet yourself, first consult a medical health professional.

They both told me the changes a person will notice in the first few weeks of a vegan diet can vary significantly, based on their medical conditions and genetic predispositions. “But in general, within a couple weeks of eating a healthy whole-food, plant-based diet, it would be typical that people may enjoy improved insulin sensitivity (their insulin works better)... and their cholesterol levels may decline,” Dr. Campbell tells Bustle. “Anecdotally, some people describe improved bowel movements, improved sleep, energy, and skin quality. All of that happens within days to a couple weeks.”

Here’s what else science knows about how your body changes in the first weeks and months you stop eating animal products.

Your Cholesterol, Blood Pressure, And Risk Of Heart Disease Could Begin To Drop

Decades of scientific study have linked dietary cholesterol and saturated fat to cardiovascular disease. Saturated fat is present in all meat and fish, while a vegan diet is devoid of any cholesterol and is low in saturated fat — so it makes perfect sense that studies have consistently shown that when people switch to a plant-based diet, their cholesterol levels drop and their risk of heart disease goes down.

Dr. Klaper tells Bustle that within just a few weeks on a plant-based diet, “elevated cholesterol levels begin to decline, and blood vessel walls become healthier and more compliant as cruciferous vegetable intake increases nitric oxide in arterial walls, all of which reduces the risk for heart attacks and strokes.”

Your blood itself also begins to change quickly. “Without heavy saturated animal fats, blood is less viscous and thus easier to pump at lower pressures. As a result, elevated blood pressures classically begin to decline and efficiency of the heart pump often increases,” Dr. Klaper says.

If You Have Diabetes, You May Notice Changes In As Little As 24 Hours

It seems unbelievable, but “a person with uncontrolled diabetes, on insulin, can see demonstrable improvements in medication usage and efficacy in 24 hours,” Dr. Klaper tells Bustle.

The American Diabetes Association confirms that a vegan diet improves glycemic control and cardiovascular risk factors in individuals with Type-2 diabetes, even reversing the disease altogether in certain patients. According to a study published by the American Diabetes Association, people who eat high amounts of animal protein, on the other hand, are 22 percent more likely to develop diabetes. Type-2 diabetes runs in my family, so I’m happy to know my plant-based diet is helping prevent my developing it one day (even if I still can’t convince my uncle and dad to try it).

Here’s what we know for sure: A vast array of studies from top universities and independent researchers have found that eating animal products promotes cancer in many forms. Large studies in England and Germany showed that vegetarians were about 40 percent less likely to develop cancer compared to meat-eaters, the most common forms being breast, prostate, and colon cancers. A 2014 Harvard study found that just one serving a day of red meat during adolescence was associated with a 22 percent higher risk of pre-menopausal breast cancer, and that the same consumption in adulthood was associated with a 13 percent higher risk of breast cancer overall.

In 2006, Harvard researchers published the results of a meta study that looked at 100,000 women aged 26-46. Those who had the highest intake of meat and dairy products also had the highest risk of breast cancer (an astonishing 33-36 percent more than those who consumed the least). For men, over 20 studies have established a strong link between prostate cancer and milk consumption. A more recent study published in the British Journal of Cancer, which followed 22,788 lactose intolerant participants from Sweden, showed that low consumption of milk and other dairy products is linked with decreased risks of lung, breast, and ovarian cancers. The World Health Organization declared processed meat a "carcinogen" which increases one's risk of colon or rectum cancer by 18 percent.

There are a number of hypotheses that could explain why animal products increase your risk of so many cancers. First, meat is devoid of fiber and other nutrients that have a protective effect against cancer. Meat also contains animal protein, saturated fat, and, in some cases, carcinogenic compounds such as heterocyclic amines (HCA) and polycyclic aromatic hydrocarbons (PAH), which are formed during the processing or cooking. Most meat and dairy also often contains artificial hormones — and always contains sex hormones naturally present in the animals, like estrogen, which also increase your cancer risk.

Animal products are some of the most inflammatory foods for our bodies, and especially after a few months without them, people tend to start noticing certain results.

“With less pro-inflammatory arachidonic acid from animal fats, and more anti-inflammatory omega-3 fats from plants, inflammatory reactions throughout the body begin to subside. The "fire" leaves inflamed joints, while "angry" skin plaques of psoriasis begin to fade,” Dr. Klaper says. “Inflamed intestines of Crohn's disease and colitis move toward healing, as do asthmatic lungs and heads that are prone to migraine headaches.”

Indeed, one study, which removed dairy from the diets of people suffering from either migraines or asthma, found that the majority of them reported their condition improving significantly.

Your PMS May Improve

A research study published in Obstetrics & Gynecology in February 2008 found that a low-fat vegan diet significantly reduced pain and PMS for many women, likely because of the reduced inflammation, improved hormonal balance, and decreased bloating we’ve been talking about.

This certainly happened to me. Don’t get me wrong, I still get PMS — but my cramps, bloating, and bleeding are all lighter.

You May Experience A “New-Vegan High”

Recently, a newly vegan friend shared with me that he experienced a sort of “stoned” feeling in his first week going plant-based. I remembered a slight emotional and physical high as well from when I transitioned, which I chalked up to generally living more in line with my values and feeling in better health. But I wanted to find out: Is there any medical basis for this feeling during the first few weeks of a vegan diet?

“We now know that the food we eat determines the microbes that live in our gut. These microorganisms are not innocent bystanders. Their metabolic byproducts get into our circulation and wash through our brain, altering our emotional states,” Dr. Klaper says. “The more beneficial bacteria in our gut likely spawned by a plant-based diet are key in creating a sunnier disposition in our minds.”

One of the main perks of going on a plant-based diet many people report is an end to constipation, or at least far more regular digestion. That said, at first, that isn’t the case for everyone — as your digestive system adjusts to taking in more fiber, you might experience some increased irregularity and bloating.

“Occasionally, in the very beginning, if someone is greatly increasing their fiber consumption, they may be gassy, bloated, or have changes in their bowel movements that make them ‘too fast’ or ‘too slow,’” Dr. Campbell says. “Sometimes tweaking the amount of water consumed, certain fruits, or probiotics can help this situation, and it often is a temporary issue.”

If you’re consuming more fiber without also consuming more water, it can actually make constipation worse. So if you’re trying out a plant-based diet, be sure to up that water consumption along with all that new, beneficial fiber.

...But Then Your Digestion May Become Seriously Awesome

This, I have to say, is one of the biggest perks I never expected. I’m hardly ever constipated or bloated on a plant-based diet, unless it’s right before my period or I eat something really processed.

This is a common experience — many people on a healthy vegan diet experience more regular bowel movements because animal products like meat and dairy are especially constipating for our systems. In fact, three-quarters of us actually lack the enzyme to properly digest cow's milk. An estimated 98 percent of Southeast Asians, 90 percent of Asian-Americans, 74 percent of Native-Americans, 70 percent of African-Americans, and the majority of Jewish, Latino, and Indian people all suffer from lactose intolerance. So even if you don’t think you’re lactose intolerant, if you’re part of one of these groups especially, you’re likely to notice a marked change in your digestion within weeks of cutting out dairy.

You can also expect other digestive benefits. “A high-fiber [plant-based] diet creates larger, easier-to-pass stools and better colon function, and thus, healing of hemorrhoids and diverticulosis. A change in the microbiome organisms to more Firmicutes-type, beneficial bacteria occurs within weeks. As a result, less inflammation is found in the colon wall and throughout the body,” Dr. Klaper says.

If all of these changes sound good to you but you’re not sure where to start, I’d suggest checking out this recent Bustle guide to moving toward a plant-based diet, or heading over to Choose Veg, which provides more information, meal plans, and free live chat support to people looking to transition towards a plant-based diet.

You can start off gradually and take it from there — or try it out for completely for a month to feel more noticeable results. Either way, your little health experiment will be helping animals and the planet, and that’s something you can feel great about no matter what.

More like this
An Expert Weighs In On The Viral Raw Carrot Salad Trend
By Alexis Morillo
Dolly Parton Released 4 New Baking Mixes With Duncan Hines
By Alexis Morillo
16 Trader Joe's Appetizers That Are Total Party-Pleasers
By Kaitlyn Wylde
Do Green Powders Work As Well As TikTok Says They Do?
By Carolyn Steber
Get Even More From Bustle — Sign Up For The Newsletter
From hair trends to relationship advice, our daily newsletter has everything you need to sound like a person who’s on TikTok, even if you aren’t.