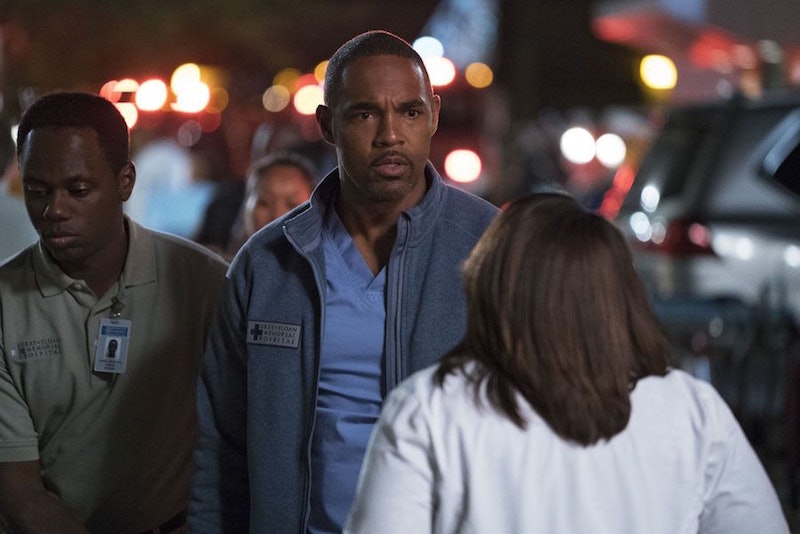 If there's one thing Grey's Anatomy fans have come to learn over the last 14 seasons, it's to always expect the unexpected. From plane crashes and bombs in body cavities, to unexpected tumors and secret sisters, Grey's is never short of jaw-dropping surprises. That's why viewers (and Miranda Bailey) are confident that something is up with Ben, who's suddenly taken an interest in running miles and miles at the crack of dawn. He mentioned to Jo that he was training for something he didn't want his wife to know about. But what exactly is Ben training for on Grey's Anatomy?

In addition to getting up early for runs in the last few weeks, Ben has also been caught sleeping in the hospital hallways and just being straight up sketchy. But unlike his family and colleagues, loyal fans know exactly what's going on. The Hollywood Reporter confirmed that Jason George, who'd been appearing as Ben Warren since 2010, would be trading one adrenaline rush for another and moving over to the yet-to-be-named spinoff about Seattle's fearless firefighters. Although, fans may not have expected the move to be so soon.

In the Season 14 premiere, a distraught Jo repeatedly mentions former resident Stephanie, sad that she didn't even get a chance to say goodbye. The two had become a dynamic duo, sort of like Meredith and Cristina, and Jo struggled with figuring out who would be her "person" moving forward. Ben attempted to be the go-to guy for all Jo's love and dating advice, but broke "girl code" and basically told Alex what Jo said as soon as he got a chance. Now that he's gearing up to leave the show, just who will Jo vent to now?

The Grey's Anatomy spinoff, set in a Seattle firehouse, was announced in early 2017 and will likely be introduced as a backdoor pilot in a Grey's Anatomy episode. According to The Hollywood Reporter the new series will focus on a group of firefighters — "from the captain down the ranks to the newest recruit" — saving the city from fires and more while also trying not get burned by their personal lives. Seems like a perfect fit for Ben, who went into full firefighter mode in the Season 13 finale. He worked hard to save Stephanie, despite being repeatedly told not to re-enter the burning building. Most people who aren't already trained to walk through fire would be terrified of doing this, but Ben has continued to describe the life-threatening experience as a "rush."

None of this should surprise viewers. Even George described his character as an "adrenaline junkie," in a previous interview with Bustle. I mean, never forget that he delivered April Kepner's baby on a kitchen table. And, before he was a surgical resident, he was a successful anesthesiologist and nearly gave Bailey a heart attack when he said he wanted to start his career all over and make the switch to surgery. So clearly if there's anything Ben loves more than his wife, it's taking risks, and one can only imagine how his newest adventure will play out.

How exactly he'll make this transition has yet to be discussed, but the even bigger question is what will happen to his relationship with Bailey? Is yet another divorce on the horizon? That may seem a tad dramatic in the real world, but every Grey's watcher knows that when one half of a couple goes off to "find themselves" or chases a new dream in this universe — their relationship sadly suffers, whether that's fair or not. Case in point: Arizona and Callie. April and Jackson. Cristina and Owen. Derek and Meredith. Pattern, much? Job changes and different schedules don't usually bode well for Seattle Grace's doctors. For the love of Dr. Bailey, fans hope this relationship lasts, but when it comes to Shonda Rhimes you can never be too sure.

But, the firefighter spinoff at least has plans to intersect with Grey's Anatomy. "I think the shows will cross over a couple times a season if Private Practice is any example," George said in that same interview with Bustle. "What I love is the idea that it either causes great strife between Ben and Bailey or Ben comes home from fighting fires and there's Bailey for support and she comes home from saving lives and there's Ben. We can pop into each other's shows that way. Or when I bring somebody to the hospital."

Bailey isn't the type of woman to sit around and wait for someone to tell her what's going on, and, as suspicious as she's been the last few episodes, fans should keep the popcorn ready for the Thursday when she finally finds out what Ben's been up to. I certainly wouldn't want to be Ben in that moment.