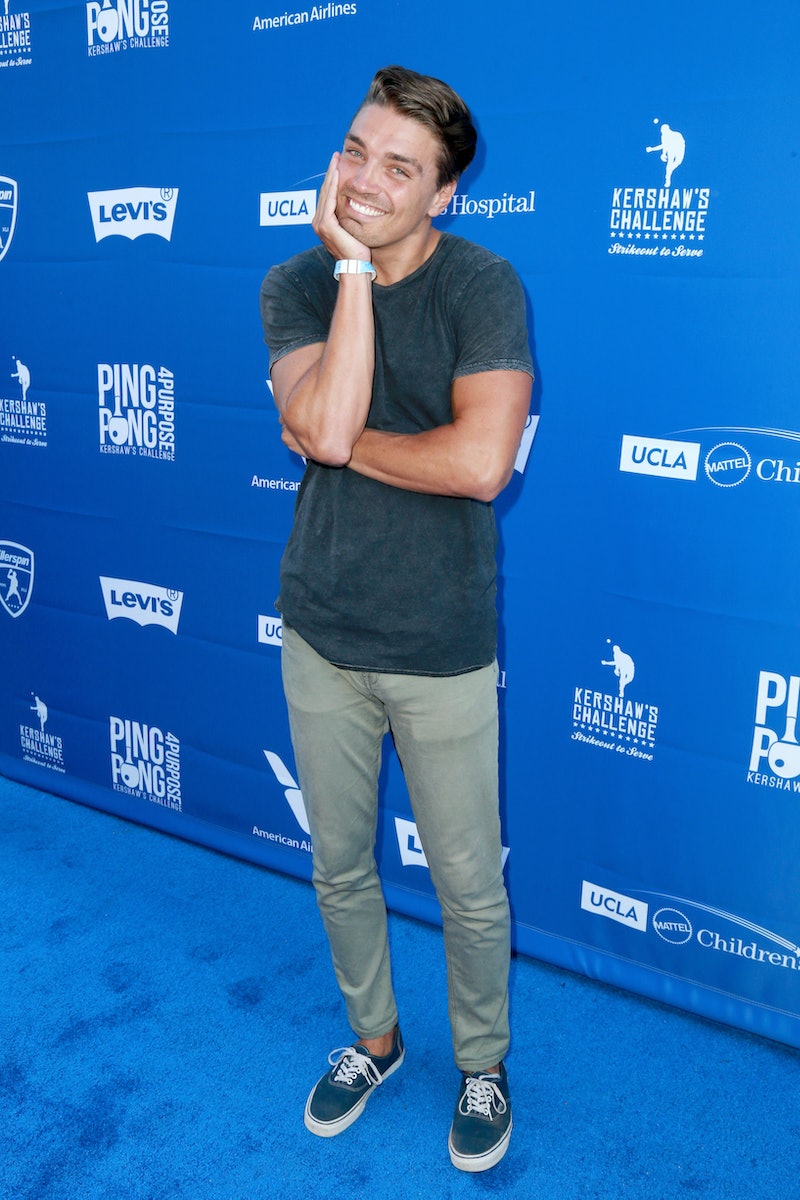 It's been three weeks since the Bachelor in Paradise Season 4 finale aired, but drama around the Kristina-Dean-Danielle love triangle is still going strong. In case you've miraculously missed the news, Dean caused some Bachelor in Paradise trouble. He started out strong by dating Kristina, then showed interest in Danielle, then Kristina again, and then the rest just got very confusing. After it got so messy, the 26-year-old wound up with neither (even after Dean posted about Kristina and Danielle posted about Dean). And while Bachelor Nation is dying to know if he's romantically involved with either, Dean Unglert says he's focused on himself right now.

Dean recently went to the Bachelor set with a date, but it wasn't Kristina, Danielle, or any woman — it was his fellow Bachelorette buddy Alex. There, Dean attempted to explain his confusing relationship status, even though recent reports claimed he'd reunited with Kristina. "I'm si— I don't know," he says. "It's complicated."

Fair enough. And while it's unclear who Dean regularly keeps in contact with, he's certain about getting in the right mindset before getting into a serious relationship. "I need to figure out myself before I can date anyone first. That's the important thing right now," he explains. "But we'll see what happens."

Dean's totally aware of the indecisiveness which caused him to get so much heat from fans. "I'm pretty bad at dating, really," he explains about his new podcast I Suck at Dating. Dean is using his platform and the opportunity in an attempt to right his wrongs, do some self-exploring, and avoid similar conflicts in the future.

"What happened in Bachelor in Paradise, my indecision led to some bad actions and I need to address that," he says. "So I'm starting a podcast to get experts and talk to my exes and kind of figure out exactly what's wrong."

Passionate fans certainly haven't been shy about expressing their thoughts about Dean's actions, and neither have Kristina or Danielle. In fact, Kristina visited the podcast already to give him a piece of her mind. "You have this wall up and you’re always joking and smiling, but as soon as someone gets past that wall, you have a lot to say," she told him. "You tend to sugarcoat things and not say exactly how you feel."

Danielle also expressed her current feelings about Dean. "[He] continues to allude that he only pursued me because of my looks... I don’t hate him but I am disappointed," she told Us Weekly. Beyond his exes, Dean got a ton of flak from fans over what happened throughout the course of the season.

While Dean is well aware of the criticisms, he doesn't let fans' opinions get to him. "I feel like the people with the least amount of information are the ones with the most to say," he explains. "It's kind of frustrating to see that, but, that's kind of the point of going on a TV show, everyone's allowed to form their opinion about you."

He's got the right attitude and he certainly went into Bachelor Nation with a bang. But is he seasoned enough to be the actual Bachelor? He's on the fence about it. "I would have my hesitations but I would be interested in having a conversation about it, if I was single," he says. "I guess. I don't know, it really depends."

While fans are certainly divided on Dean, there's no denying he'd make for one interesting season of The Bachelor. Like his love life, that situation is still TBD.

More like this
Jinkx Monsoon Is About To Get Real Sketchy
By Sam Ramsden
The New Bachelor Will Be Announced Next Week & Here Are The Top Contenders
By Grace Wehniainen
A Is Officially Coming Back To Wreak More Havoc In 'PLL: Original Sin' Season 2
By Kadin Burnett
Here’s Everyone Heading To The Beach On 'Bachelor In Paradise' Season 8
By Grace Wehniainen
Get Even More From Bustle — Sign Up For The Newsletter