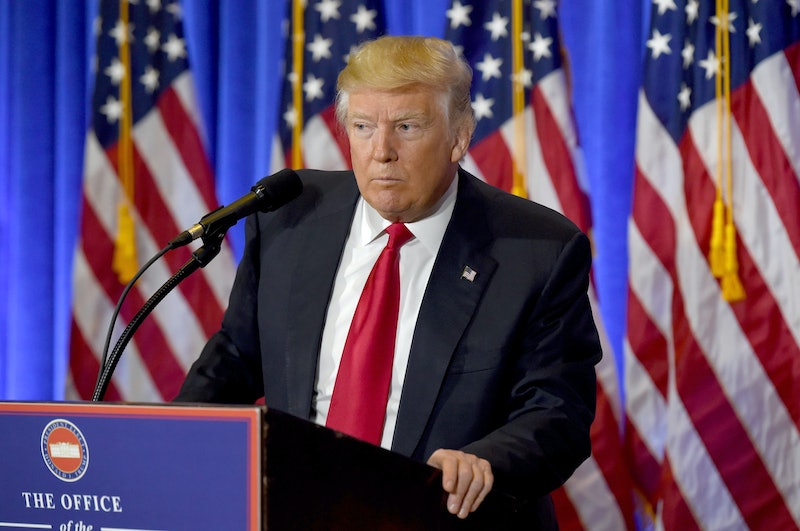 It may sound similar to what others are saying, but when you listen closely, President-elect Donald Trump's stance on the alleged pre-election Russian hackings of Democratic Party information is unique. (Though the CIA and FBI have agreed that Russia allegedly interfered in the U.S. presidential elections, Putin has repeatedly denied the hacking allegations.) Sure, Trump finally decided to tell people he believes Russia was supposedly behind the hackings. But apparently, he believes others could have been involved too; "we also get hacked by other countries, and other people," he claimed during his first post-election press conference, according to CNN.

And that's not all. Of course, Trump had to take a moment to refer to his former opponent, Democrat Hillary Clinton, and the information leaked about her as a result of the hackings. "Hacking’s bad, and it shouldn’t be done. But look at the things that were hacked, look at what was learned from that hacking," the Washington Post reported Trump saying. And while the hackers may have targeted Clinton, they weren't supporting him, Trump claimed. This is in contrast to what the FBI and CIA have concluded: that alleged Russian hackers were partly seeking to help Trump win the election. Again, Russia has denied these claims. Trump probably wasn't condoning the hackers' actions, but it doesn't seem like he's too unhappy with the information they ended up leaking.

The President-elect also said the United States won't be vulnerable to alleged Russian cyber attacks in the future. According to him, this especially applies to the Republican Party. Trump had earlier tweeted that the Democratic National Committee was hacked due to "gross negligence," while the Republican National Committee had "strong defense," a claim which he did not support with evidence.

As for the future of U.S. cyber security, Trump claimed during the press conference that within 90 days, his administration will put out a report on how to prevent hacking, the Washington Post reported.

Despite saying there's a "good chance" he won't get along with Russian President Vladimir Putin at the press conference, Trump insisted that improved relations between Washington and Moscow would be good for the United States. This is despite Trump's telling CBS in Oct. of 2015 that he "would probably get along with [Putin] very well." But maybe things have changed for him now that he's President-elect.

And of course he had to take yet another jab at Clinton before the press conference ended; "Do you honestly believe Hillary would be tougher on Putin than me?" he asked. Well, we won't know, since she's not president, but we'll have to hope that Trump will live up to his words.