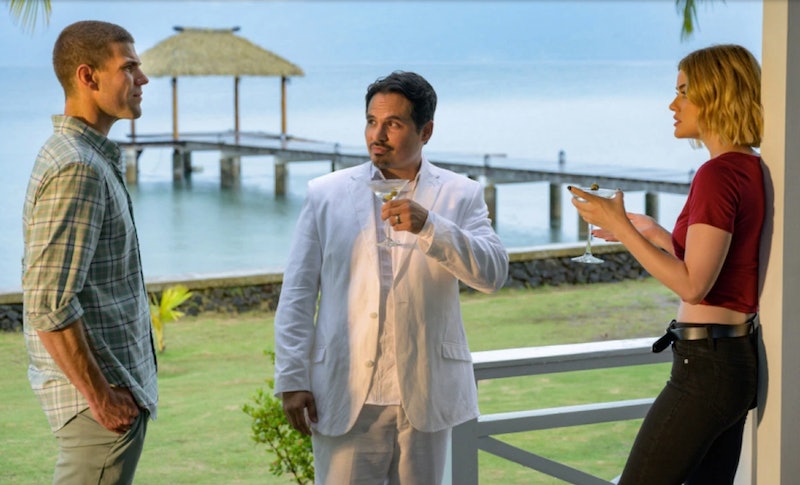 What's the one thing that you want most in life? Not an accomplishment, or a tangible item, but your ultimate fantasy? Whatever it is, Blumhouse's Fantasy Island has got you covered. The new movie, which opens Feb. 14, looks like it has roots in tropical-set, match-making reality TV, but it's a bit more sinister than that. The mystery might have you wondering what Fantasy Island is based on.

Fantasy Island is actually based on an old fictional television show of the same name that ran from 1978-1984 on ABC. The fantasy drama starred Ricardo Montalbán as the mysterious Mr. Roarke and Hervé Villechaize as his assistant, Tattoo. The premise of the series is pretty identical to that of the movie, though guests fantasies were often more weird and goofy than dark or disturbing. Their fantasies still took an unexpected turn, but more in the guise of teaching them a lesson, rather than torturing them. The new film, however, seems to firmly land the story in horror territory, with torture rooms, people brought back from the dead, and other terrifying fulfillments.

The new Fantasy Island stars stars Michael Peña as Mr. Rourke, along with Maggie Q, Lucy Hale, Austin Stowell, Portia Doubleday, Jimmy O. Yang, Ryan Hansen, Parisa Fitz-Henley, and Michael Rooker. It was directed by Jeff Wadlow and written by Jillian Jacobs, Chris Roach, and Wadlow, with Jason Blum producing through his Blumhouse banner, the same company that brought us Get Out, Paranormal Activity, and The Purge.

The movie's official synopsis details how the original series' campy premise was transformed into a new horror angle: "The enigmatic Mr. Roarke (Peña), makes the secret dreams of his lucky guests come true at a luxurious but remote tropical resort. But when the fantasies turn into nightmares, the guests have to solve the island's mystery in order to escape with their lives."

Speaking to Hollywood Outbreak, star Maggie Q emphasized that you don't have to be familiar with the original Fantasy Island in order to enjoy the new movie. "We have fans of the show which is great, which is obviously an older audience. Then you have those that remember the show, because of the generation right before them, so it's in their heads, they have a familiarity with the name. And the rest of the people who have no clue what it is," she says. "Across the board, we've owed properly to the property... and within that world we created something that's new. So whether you know it or not, you don't need to have that familiarity with the title to be able to enjoy what it is that we've created."

So sit back, relax, and enjoy your fantasy without the obligation of knowing a wacky drama from the 1970s. But you've been warned; fantasies come with a price.

More like this
These 25 International Horror Movies On Netflix Prove Fear Is A Universal Language
By Bustle Editors
'The Ex-Wife’s First Look Pics Are Giving 'Gone Girl' Vibes
By Bustle UK
Paul Mescal, Man Of Mystery
By Samantha Leach and Heather Hazzan
What’s New On Netflix: Ana De Armas’ 'Blonde' & A Nick Kroll Special
By Arya Roshanian
Get Even More From Bustle — Sign Up For The Newsletter