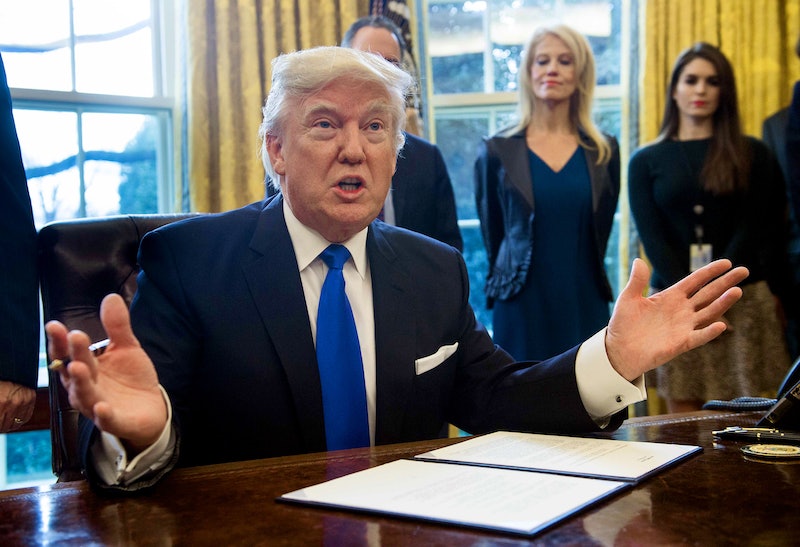 HR 7 — formally known as the No Taxpayer Funding for Abortion and Abortion Insurance Full Disclosure Act of 2017 — is essentially an extension of the Hyde Amendment, which prevents federal funds from being used for abortion. There are already 10 states that prohibit insurance coverage of abortion for all providers, and another 15 who prohibit it for Obamacare recipients, but this federal bill would eliminate all insurance funding for abortion. Even if you had private insurance through a non-religious company in a liberal part of the country, you still wouldn't be allowed to get coverage.

According to Destiny Lopez, Co-Director of All* Above All, a pro-choice advocacy group, the new bill is part of a dangerous precedent Congress is trying to set. "If anyone was wondering about the priorities of the new anti-woman Congress — they’ve shown their cards. In just two weeks, they’ve already taken steps to dismantle the ACA and take away birth control coverage, defund Planned Parenthood, and now they’ve re-introduced sweeping legislation to make the Hyde Amendment permanent," Lopez said in a statement regarding HR 7.

There is no legitimate social benefit to this bill, other than that premiums might briefly go down before rising again from the inevitable spike in women attempting dangerous at-home abortions. Like Lopez asserts, the only thing that this bill would accomplish as law is further subjugation of American women.

Losing insurance coverage for abortion is an especially scary thought for millennials, the generation most likely to experience unintended pregnancy right now. While most have health insurance, either through the ACA or their job, many are also strapped for cash. Having to pay out of pocket for an abortion, which, according to Planned Parenthood, can cost up to $1500 in the first trimester, could cause devastating financial repercussions and leave them without a safety net for other emergencies. This inability to cover legitimate healthcare needs could leave millions of young women in danger and without a safe and feasible alternative.

The ultimate irony of this bill is that even if it reduces abortion rates because women can't afford to get an abortion, there's no way they're going to be able to afford the prenatal care, hospital bills, or 18 years of caring for a child. This rule would accomplish little more than to force women to seek unsafe abortions at home or make more people dependent on public assistance. But it seems to conveniently support the Republican establishment worldview — women are irresponsible for having sex and getting pregnant, then don't deserve help when forced to keep the resulting child.

This new bill is probably just the first in a series of heartbreaking setbacks for reproductive rights coming over the next few years. It's difficult to think about how to fight back when the fear of not being able to access healthcare if you need it keeps closing in, but the generations of women coming after this need help. Letting this bill pass without massive uproar will show Republican Congressional representatives that these changes are acceptable, and it's up to the women of this country to see that doesn't happen.