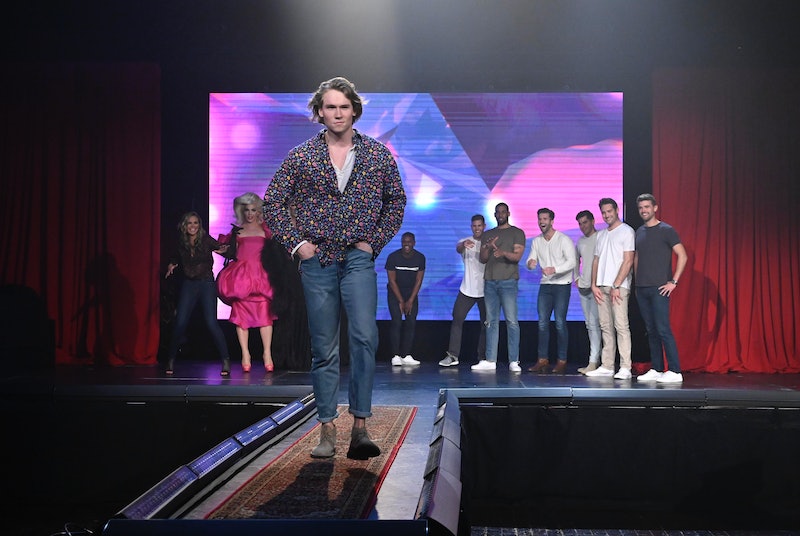 The Bachelor and Bachelorette have had their share of, let's say… personalities over the years. It's not hard to see why — being different gets you on TV. Being different gets you noticed. Being different may not win you the hand of the Bachelor or the Bachelorette at the end of the whole thing, but it can nab you 150,000 Instagram followers and a platform for that specialty men's sock line or shaving club that you've been trying to launch. After The Bachelorette, John Paul Jones will likely be in that camp, too — he's the quite the character, and based on how the show has been framing him (ie. listing just his full name as his job title), it's unlikely that he'll land Hannah B.'s final rose.

Wherever old JPJ winds up, he'll be having a good time. We're only about two weeks into the season, so we don't know much about him yet, but so far he's proved himself to be a goofy, out there (but maybe in a good way?) kind of guy. From his ABC bio, we know he likes champagne and long words. From the show, we know he can ride a unicycle. So, uh, eccentric would be one thing to call him. Let's see what else we can figure out about John Paul Jones from what he’s been doing since The Bachelorette wrapped filming.

He's Poking Fun At His Time On The Show

John Paul Jones doesn't seem to take himself too seriously, so joking about the tense final moments of the Bachelorette premiere — during which his name was called last for a rose — seems par for the course. "Finally get to take it easy after grinding it out for that final rose," he captioned this photo of him and a friend kicking back in some lounge chairs.

John Paul Jones has a lot of pics — past and present — showing him fishing or on a little boat. His home state of Maryland does have quite the coast line. This man clearly likes getting outdoors and catching his dinner, and he certainly didn't stop after The Bachelorette finished. Maybe he's not all caviar and champagne after all.

Look at how adorable John Paul Jones' niece and nephew are — such little nuggets. He clearly adores them and loves spending time with his family — he hasn't posted much to Instagram, but several of his photos are with relatives. That's probably something he's focusing on now that he's back home.

He's Doing (Maybe Not So) Well At Work

John Paul Jones, CEO of John Paul Jones, is probably home appreciating the impression his star employee (read: himself) made on The Bachelorette. (Kidding, kidding. His ABC bio says he's a financial analyst, though we do one thing he's not doing after the Bachelorette: enjoying a promotion).

Did John Paul Jones end up with Hannah? This guy is such an enigma that it's hard to tell, but more than likely, we'll see him in Paradise doing what he seems to do best: having fun.