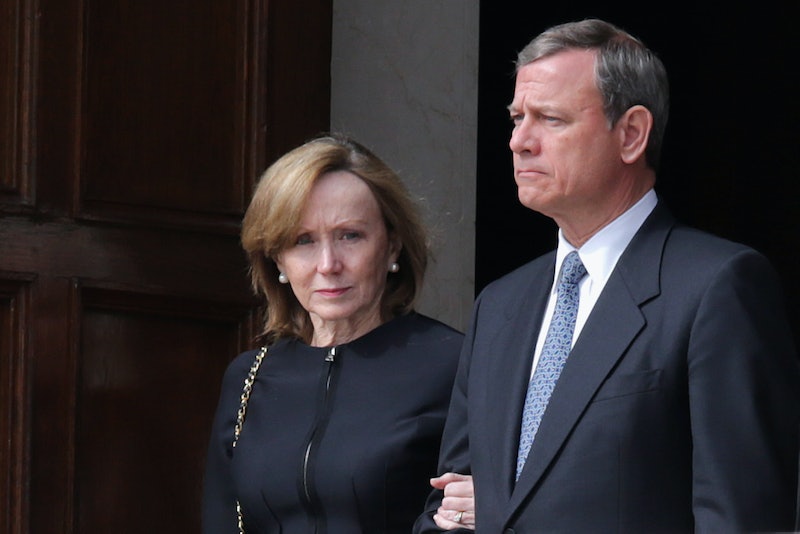 Inauguration Day will be a first for President-elect Donald Trump, but not for the man who swears him into the highest office in the land. For the leader of the Supreme Court, rather, it will be a third. Chief Justice John Roberts will be doing his Inauguration Day duty on Jan. 20, when he reads the Oath of Office to Trump in front of the National Mall.

As the crux of the entire Inauguration Day process, Trump's swearing-in will take place on the steps of the Capitol Building. During that process, it is typically the duty of the chief justice of the U.S. Supreme Court to administer the Oath of Office to the new president. You've seen the proceedings (or, at least, similar ones) before: Roberts will read the oath line-by-line while Trump repeats, resting his left hand on a book, which is usually the Bible, and raising his right hand. It's actually remarkable that the inauguration process, for better or worse, hinges on fewer than 40 words:

Roberts previously swore President Obama into office in both 2009 and 2013. In 2009, at Obama's first inauguration, it was clear that the event was also Roberts' first. The chief justice read the word "faithfully" out of place, causing Obama to do the same. To certify that the oath was administered correctly and that Obama's presidency was, in fact, legal, Roberts and Obama repeated the process the next day in the White House. Before Obama's second inauguration in 2013, Roberts and Obama met the day before the public ceremony to rehearse, according to Reuters.

If the third time is a charm, then Roberts and Trump will complete the oath live without an issue. No matter how the words play out, the big question on the public's mind may not be about the oath, but rather, about Trump's next move. In fact, Roberts himself may even be curious about how Trump's presidency will play out.

At the end of December, Roberts released his 2016 year-end report on the federal judiciary. In it, he praised the system's federal district judges, writing, "The men and women across the country who today serve as district judges are generally not well known...but they deserve tremendous respect."

As The Daily Caller speculated, this could have been a reference to Trump's criticism of one district judge, in particular. Last summer, Trump attacked Judge Gonzalo Curiel, who presided over a Trump University lawsuit, by alleging that Curiel's Hispanic background made him biased and unfit to handle the case. It's unlikely that Roberts would make a much more direct statement to criticize Trump, as members of the Supreme Court are widely expected to remain neutral in political matters. Still, standing up for federal district judges shows solidarity within the judicial branch.

Regardless of Roberts' comments and what they may refer to, he'll stand up next to Trump on Inauguration Day to show another kind of solidarity: solidarity with the U.S. Constitution, which dictates the oath that the president must take. Trump will vow to preserve, protect, and defend that Constitution. Then, he'll have to prove it.