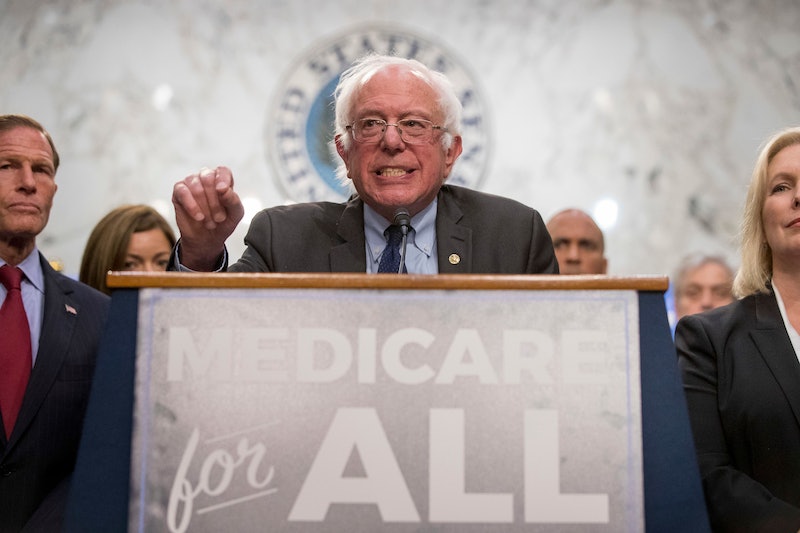 If you have friends in the United Kingdom — or any other country with nationalized health care — then you know the unique combination of envy, despair, and fury that comes with the realization that not everybody, everywhere is afraid of being bankrupted by medical bills. Some politicians in the United States are pushing for a similar system, like the one suggested in the Medicare For All Act.

Medicare is a federal insurance program available to U.S. citizens who are 65 and older as well as those who have certain disabilities, regardless of their income level. Just an FYI: Medicare is different from Medicaid, which is a federal-state program that provides assistance to low-income people at any age. Under the Medicare For All Act, which Sen. Bernie Sanders (I-Vt.) introduced in September 2017, the Medicare program would be available to everybody. The program would pay for dental and eye care, mental health care, prescription drugs, and emergency surgery.

Sanders wasn’t the first politician to suggest the idea of "Medicare for all" health care in the United States. Former Rep. John Conyers (D-Mich.) introduced the Expanded & Improved Medicare For All Act in 2003. As of October 2017, that bill had 123 co-sponsors backing it, the highest level of support it has ever received.

But even with that support, it hasn’t passed yet.

The White House has come out very strongly against the idea. White House Press Secretary Sarah Huckabee Sanders said last year that she couldn't "think of anything worse than having government more involved in health care.” The White House’s opinion aligns pretty closely with that of Republican leadership. Senate Majority Leader Mitch McConnell (R-Ky.) claimed that “the Left is demanding an actual government takeover of health care.”

What about the experts on health care — the people who provide it?

Opinions are pretty divided. Some physicians — like those involved in the Physicians for a National Health Program organization — say it would “transform the U.S. health care system, making health care a human right.”

But some hospitals and doctors say that "Medicare for all" would substantially decrease the amount of money they make, forcing them to eliminate certain services, reduce the length of patient appointments, and pay their employees less.

Do they have other suggestions?

According to a survey the Association of American Physicians and Surgeons conducted in September 2017, physicians have a huge range of ideas on how to change the health care system.

They’ve suggested everything from a hybrid system, where the government pays for preventive care like the flu shot and helps people pay for private insurance, to a plan to put insurance in the hands of “a single-payer nonprofit owned and run by physicians.”

Can you sum this up for me?