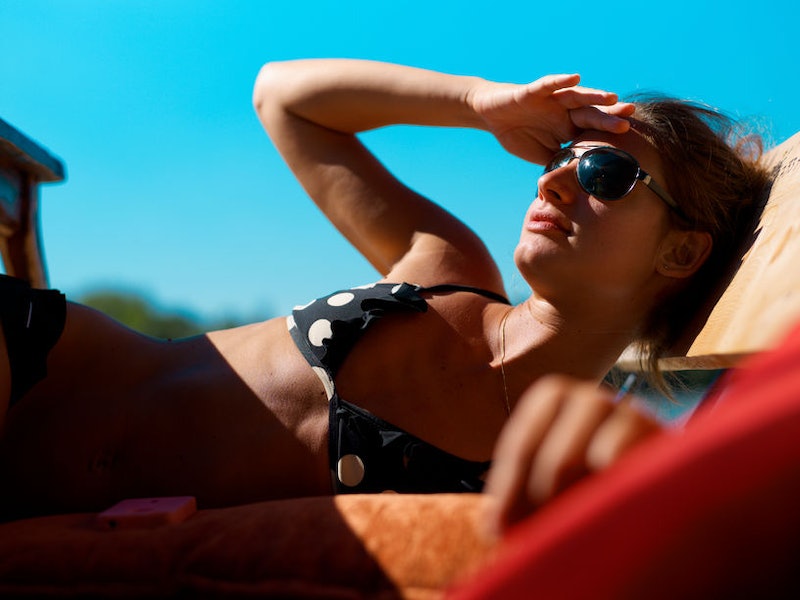 You know the drill. You spend one glorious day in the sun and half your body flares up with those itchy red spots. Yep, you've gone and got prickly heat yet again. Officially known in the medical community as miliaria rubra, heat rash is incredibly common. But what exactly causes it, and more importantly, how do you get rid of prickly heat?

With up to 30 percent of people suffering the condition, you'd think there would be some kind of cure by now. Unfortunately, the reason why no such miracle exists is because it's your body's natural reaction to a hot and sweaty climate (I guess there's one advantage to British weather).

Heat rash occurs when the body's sweat ducts become blocked. This can be due to either excessive sweating or by a growth in bacteria. Once the ducts are blocked, sweat has nowhere to go but the skin, causing inflammation, which shows itself in those pesky red bumps.

Saying that, not all is lost. While prickly heat may have made an appearance on plenty of your holidays in the past, a little know-how is all you need to alleviate the symptoms and get back out there. Not to state the obvious but the best way to reduce the chance of getting the rash is to not sweat. Well, to not sweat as much as you normally would in 35 degrees Celsius. How do you do this? By keeping yourself cool throughout the day. This could be by taking a cold shower or jumping into the pool every couple of hours.

You can also stock up on some cooling sprays to use when you're feeling extra sweaty. Magicool spray was specifically designed with irritated skin in mind. Alternatively, there's Avene's soothing Thermal Water Spray to try. Both options are available in Boots. And when it comes to dressing, opt for garments that allow your skin to breathe rather than heavy fabrics. Light cotton is a safe bet.

Naturally, there will be times when you won't be able to prevent the dreaded rash. But if you do get prickly heat, there are plenty of remedies you can try to make it go away as quickly as it came.

As advised by the NHS, the number one thing to remember is don't scratch. Yes, it may be itchy as hell but the worst thing you can do for a rash such as prickly heat is to irritate it further with sharp nails. If the itchiness is becoming too much, try tapping or patting it with your fingers instead.

As soon as you see signs of prickly heat, take an antihistamine (you can also do this up to two weeks before going on holiday as an extra precaution). It's also important to keep the affected area cool and open — so don't cover up with long sleeves or jackets.

The rash will feel warm so again, think cool. The NHS recommends applying either a damp cloth on its own or an ice pack wrapped in a cloth for 20 minutes or less. It might even be beneficial to visit a local pharmacy and ask for calamine lotion, which provides even more cooling, or hydrocortisone cream if the itching just won't go away.

You will probably need to change up your skincare routine too. Although your first thought may be to pile on the lotions and potions, this will only add to the blockage. Instead, use something like an antibacterial or non-perfumed soap to wash with. Plenty of people have recommended Dettol soap in particular, although skincare experts won't list it as a routine treatment.

The last thing you can do to combat the effects of prickly heat is to remain hydrated at all times. If you're not a huge fan of water, wellness fanatics recommend natural fruit juices like pineapple and watermelon. But bear in mind that there is little science behind this except the fact that juice contains vitamins.

So the next time you visit a hot country, remember your antihistamines, cooling sprays, and more to beat the prickly heat once and for all.