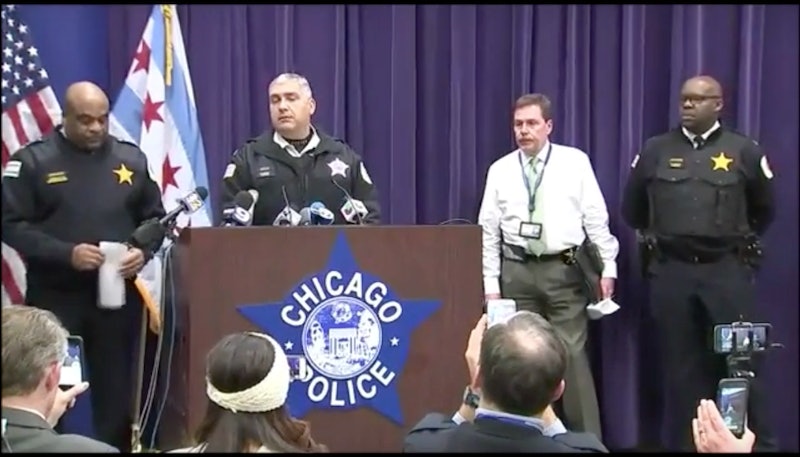 Sometimes, the particulars of a crime seem too grotesque to be believed. And in the case of the wrongly dubbed "BLM Kidnapping," the details paint a uniquely harrowing picture. On Wednesday, four 18-year-olds reportedly kidnapped a young man with mental health challenges and live-streamed their physical and verbal abuse of him. The perpetrators streamed this disturbing video first on Facebook, and then uploaded it to YouTube, before apparently releasing the victim. He was then picked up by the police, who found him wandering, in distress and somewhat incapacitated from the trauma.

Later on Wednesday, the four teens were all arrested on "unrelated battery charges." Chicago police put the two incidents together, and the two male and two female suspects are now under investigation for the kidnapping and abuse of the young man.

So why is this crime trending on Twitter as #BLMKidnapping? The answer seems to be that a large number of tweeters who are against the Black Lives Matter movement were all too happy to take the racial implications of the video and of the parties involved and then manipulate them. The kidnappers appear to be black teenagers, the victim is white, and in the video, he endures racially-charged verbal abuse ("f--k white people," and "f--k Donald Trump").

Somehow, this was apparently enough for people to twist this isolated and highly disturbing crime into a false narrative about the Black Lives Matter movement.

Obviously, the most important thing here is ensuring justice. Watching the video of this young man enduring physical violence is deeply disturbing, especially considering that he suffers from mental health issues. In their press conference yesterday, the Chicago police reiterated their commitment to ensuring that the perpetrators will be brought to justice.

But it is sadly telling of the political moment we're in that so many on the far right jumped at this chance to demonize BLM, rather than seek facts and advocate for serious and severe repercussions for the four individuals responsible for this crime.

To nonchalantly, without so much as a qualifier or semblance of critical thought, label a single incident the "BLM Kidnapping" demonstrates a lot of what's wrong with some far-right users online. Every news story is an opportunity to attack a perceived enemy, with or without any facts to back it up.

This tweet sums up nicely why "#BLMKidnapping" is the wrong term, factually and morally:

Hopefully, those responsible for the kidnapping and abuse of a young man will be brought to justice. Further, here's hoping that in the future, isolated incidents of crime will not be manipulated to smear wholly unrelated movements.

More like this
Chris Kaba's Family Continue Fight For Justice After Viewing Police Bodycam Footage
By Sophie McEvoy
Women Around The World Are Cutting Their Hair In Solidarity With Mahsa Amini
By Darshita Goyal
Here's What Jeffrey Dahmer's Dad Has Said About His Other Son, David
By Grace Wehniainen
Where Is Lionel Dahmer Today? Jeffrey Dahmer’s Father Reflected On The Serial Killer’s Death In 2020
By Brad Witter
Get Even More From Bustle — Sign Up For The Newsletter