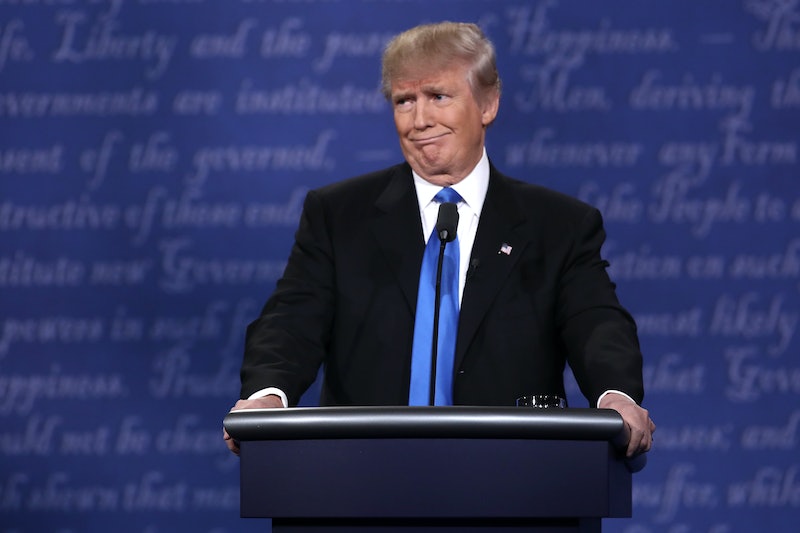 Anybody who thought that the vile rhetoric coming from Donald Trump and his allies during the 2016 campaign would end after Trump's unexpected electoral victory has already been proven wrong. On Tuesday, the rumors swirling around the possibility of Russian interference in the election took a new, scandalous turn, as the publication of an unverified dossier supposedly put together by a former British intelligence agent claimed that Donald Trump arranged to have Russian prostitutes urinate on a bed previously used by President Obama in the Ritz-Carlton Hotel in Moscow. The details are graphic — and, again, unverified. The claims made therein have been investigated by renowned journalists, who were ultimately unable to corroborate the allegations. On Twitter, Trump wrote: "FAKE NEWS - A TOTAL POLITICAL WITCH HUNT!" Update: On Wednesday morning, Russia denounced the unverified report involving supposedly compromising allegations against Donald Trump as an "absolute fabrication."

BuzzFeed News published all 36 pages of the document, claimed to have been compiled by a former agent of British intelligence agency MI6. According to CNN, the report has been reviewed by President Obama, Trump, and senior members of Congress and U.S. intelligence agencies. John McCain allegedly passed the dossier on to authorities.

The document makes incredible — and, again, unconfirmed — claims about the extent of Trump's alleged collaboration with Russian officials, but what lit up Twitter was this salacious selection about an alleged request to have a "golden showers" performance intended to defile a Moscow hotel bed that President and Mrs. Obama had slept in.

The report essentially claims that Russian authorities spent years amassing embarrassing information about Trump with which to blackmail him if necessary. The most fruitful of these efforts, the report says, related to Trump's alleged "personal obsessions and sexual perversion." So far, Trump's camp has denied the allegations via the Tweet.

One source, whose identity is not revealed in the dossier, claimed that they were present when Trump booked the presidential suite at Moscow's Ritz-Carlton Hotel, specifically requesting the room where President and Mrs. Obama had stayed. Trump then allegedly hired a group of Russian sex workers and asked them to engage in a "golden showers" performance, which the source claimed Trump watched.

The term "golden showers" is a general phrase for sex acts involving urination. In some instances, individuals request to be urinated on, while in other cases, subjects derive pleasure from watching another person urinate. The specifics of a particular "golden shower" are, of course, up to the parties engaged in the act, but the scene described in the dossier does fit within a broad understanding of that particular genre.

The source goes on to allege that the hotel was under the control of Russia's Federal Security Service (FSB). The unidentified source claims that the hotel was under FSB surveillance, suggesting that there may be audio or video evidence of the alleged incident. There is no further information about where to find such evidence, or if the informant has any reason to believe it truly exists.

However, at least one journalist who had previously reviewed the dossier said his team had investigated the "golden showers" allegations and could not find conclusive evidence or additional sources to confirm it. Kenneth Vogel, a journalist at POLITICO, pointed out that the allegation also seemed to be at odds with Trump's own admission that he is a "germaphobe."

It bears repeating that the dossier has been available to politicians, journalists, and officials in the intelligence community for several weeks, and that it contains some clear errors that cast additional doubt on its veracity. Nevertheless, the document has reportedly sparked enough interest that the FBI is investigating the claims that Trump was influenced by the Russians during the election.

At the very least, the allegations contained in the dossier have sparked a long-overdue national conversation (at least on Twitter) about the specifics of urine-related fetishes, and whether or not urine is sterile.

At press time, neither Trump nor his transition team had directly addressed the allegations made in the document.

More like this
Watch Jacinda Arden’s Devastatingly Honest Resignation Speech
By Sam Ramsden
6 Organizations Fighting Police Brutality That You Can Support Right Now
By Syeda Khaula Saad and JR Thorpe
What The UK Blocking Scotland’s Gender Recognition Bill Means
By Sam Ramsden
Owen Thiele Asked Sundance Attendees About Films That Don’t Exist
By Grace Wehniainen
Get Even More From Bustle — Sign Up For The Newsletter
From hair trends to relationship advice, our daily newsletter has everything you need to sound like a person who’s on TikTok, even if you aren’t.