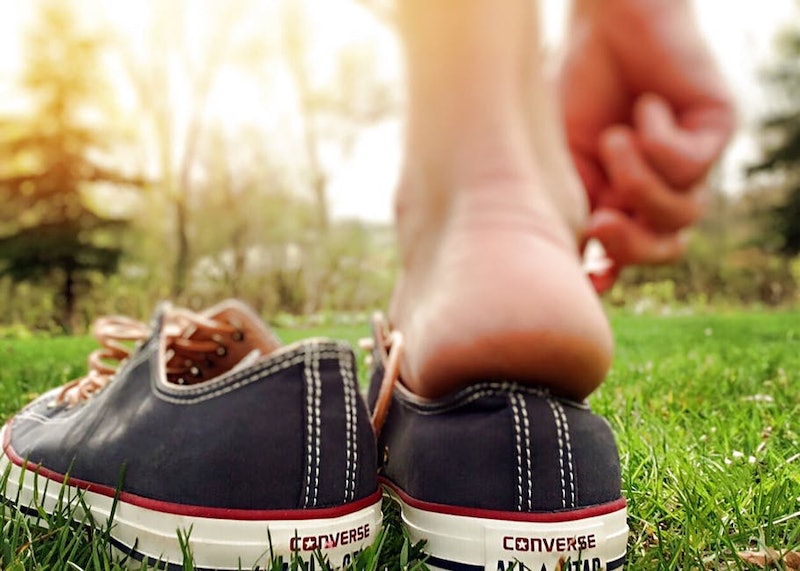 The internet is a strange place — but sometimes, it’s actually not as strange as it seems. Such is the case with the “arm to foot”challenge currently sweeping the Chinese social network Weibo. What is the “arm to foot” challenge, you ask? Well, technically, that’s not its official name — I don’t even know if it has an official name —but it involves people taking pictures of their feet lined up next to their forearms in an effort to find out if they’re the same length. Want to know the best part, though? Body ratios are a thing. For once, we’ve found a wacky internet challenge that isn’t completely baseless.

According to BuzzFeed, the inspiration for this particular challenge is an anime known as Case Closed (or, alternately, Detective Conan). Based on the manga of the same name, it’s a mystery series following the adventures of an apparent child detective — and I say “apparent” because Detective Conan is not, in fact, a child.

I am fairly well-versed in manga and anime, and I’m fond of the mysteries in particular; however I have not hitherto read or watched Case Closed. Clearly I am going to have to start now, though, because it sounds bananas and I am totally on board with it. Here are the first couple of sentences of the Wikipedia plot summary (emphasis mine):

“Jimmy Kudo (Japanese: Shinichi Kudo) is a high school detective who sometimes works with the police to solve cases. During an investigation, he is attacked by members of a crime syndicate known as the Black Organization. They force him to ingest an experimental poison, but instead of killing him, the poison transforms him into a child. Adopting the pseudonym Conan Edogawa and keeping his true identity a secret, Kudo lives with his childhood friend Rachel Moore (Ran Mouri) and her father Richard (Kogoro), who is a private detective.”

I mean… sure. Yes. I will take that, and I will run with it.

(That's Detective Conan, by the way.)

In any event, a Weibo user recently posted a screenshot from Case Closed in which wee Detective Conan explains that the length of a person’s foot is equal to the length of their forearm. But is it true? As many Weibo users who subsequently measured their own feet against their forearms found out, generally, yes, it is:

I even confirmed it myself:

So, where does this piece of knowledge actually come from? You actually probably already know, even if you don’t think you do.

You’re familiar with the Vitruvian Man, right? That drawing by Leonardo da Vinci of a perfectly-proportioned, very naked man depicted with his arms and legs spread as he stands within a square intersecting with a circle? The Vitruvian Man is named for Roman architect Vitruvius, who is noted for being the first person to describe the “ideal”proportions of the human body according to the principles of classical architecture — and by “ideal,” I mean “mathematically perfect,” not actually perfect (that is, if your body does not match these measurements, that is totally OK). Da Vinci used Vitruvius’ notes to create his drawing — and in his own notes, he laid out what the ratios and proportions of the “perfect” human body are meant to be. One of those notes reads, “The whole length of the foot will lie between the elbow and the wrist.”

What’s more, research has determined not only that this is generally true, but also that the arm span and foot length of a person can be used to accurately predict their height. Concluded one 2012 study, for example, “In this study, the correlation between the arm-span/foot length and the standing height of both males and females was found to be an accurate predictor of the stature and regression formulae were derived for calculating the height of male or female with the arm-span or foot length.”

Although there are obviously exceptions — a non-zero number of folks doing the “Arm to Foot” challenge have found that their feet are either longer or shorter than their forearms — many people will likely find that this particular body ratio holds true for them. Indeed, an informal poll included in BuzzFeed’s piece about the trend has about 17,000 votes at the time of this writing, of which 78 percent say their foot and forearm match perfectly. (For the curious, 18 percent said their arm was longer, while just four percent said their foot was longer.)

Where do you stand?

I’m sorry. That pun was completely unintentional. I swear.

Where do you stand?